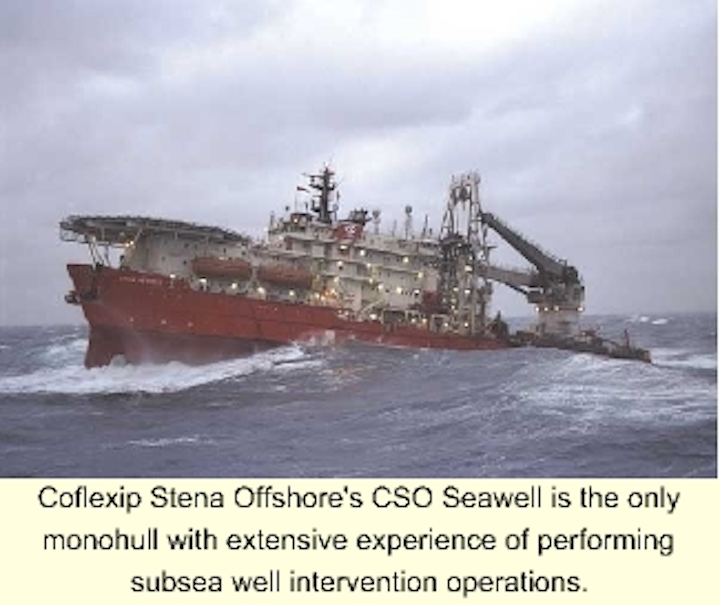 By 2003, the emerging market in subsea well intervention in the North Sea is expected to be large enough to support specialized vessels working regularly on subsea well maintenance tasks. At the moment, these activities are most often carried out by drilling rigs already on assignment in the relevant areas.

Only one monohull vessel has a significant track-record - this is Coflexip Stena's CSO Seawell, which has carried out a series of subsea well abandonments and other light intervention jobs in the UK. For Statoil in Norway, the CSO Seawell last year performed the abandonment of the Tommeliten wells and re-perforated two subsea injection wells on the Heidrun Field. DSND's Botnica, which was delivered last year, is also specially equipped for light subsea well intervention, but has not so far performed such work.

While drilling rigs are required for the heavy-duty jobs such as pulling production tubing, they are over-dimensioned for the lighter and much of the medium-duty work. The drilling rig market is at present subject to tight availability and rising rates. From the operators' point of view, therefore, there is every reason to encourage the development of services aimed mainly at the lighter part of the work scope.

A cost-effective approach to the market is required, based on coordination between different operators and licenses, says Terje Vatn, Statoil's well technology director. Models are being developed to examine how coordination can be achieved and to test the practicality of combining series of jobs in campaigns. An agreement with other licensees has so far proved elusive, perhaps an indication that the different companies do not share the same specific interests.

Statoil estimated it will require a year of light intervention work per year for one vessel working full-time off mid-Norway and one in the Tampen area of the northern North Sea. The medium and heavy intervention work will require one vessel working full-time in the same areas. The company has already secured access to heavy intervention capability in the shape of Stena Drilling's newbuild drilling rig Stena Don, for which it has signed a five-year contract. The rig is equipped for tasks like pulling production tubing.

At the light end of the market, a number of contractors and contractor groups have declared their interest in providing a service based on existing equipment, including Coflexip Stena, DNSD, Odfjell, Offshore Marine, and the Prosafe/Schlumberger alliance, while new concepts have been put forward, such as Seabrokers' subsea well intervention vessel and Wellship.

Since no monohull has yet carried out intervention work using a fixed riser, it has to be established that such a vessel could perform such work satisfactorily from a safety and environmental point of view. The main challenge for a monohull deploying a fixed riser arises in shallow water depths - 150 meters or less.

As Norwegian regulations allow the riser to deviate only 10 degrees from vertical, the surface movement area for the vessel is very restricted, meaning that very efficient station-keeping is required. If the vessel cannot hold station, for example, due to a malfunction in the DP system, it will have to disconnect within 30 seconds, according to the Norwegian Petroleum Directorate.

During wireline operations involving the use of a subsea lubricator, the stationkeeping requirement is not so acute. Where there is a choice, wireline along with a lubricator is preferable over a fixed riser on cost grounds. For example, on its Heidrun assignment, CSO Seawell used a downhole tractor on a deviated water injection well. This simplified the operation and reduced the cost by avoiding the use of coiled tubing, Vatn says.

A lot of maintenance jobs require pumping. For example, in scale removal, the scale drilled off the well walls has to be pumped back to the surface. Statoil's experience indicates that substantial scale production is to be expected on fields such as the Gullfaks Satellites and Statfjord Satellites. For this type of work, a flexible riser offers a cost-effective alternative to a fixed riser. Again acceptable criteria have to be established for a monohull deploying a flexible riser.

Vatn is now leading a Statoil project that aims to flesh out the concept for a light intervention facility working in three different modes: without a riser, with a flexible riser, and with a fixed riser.

The work, which kicked off in February and is due to be complete in September, will provide the basis for establishing the design criteria for such a vessel, he says. The Norwegian Oil Industry Association (OLF), which is interested in seeing industry standards established for the subsea well intervention market, has expressed its support for the project.

Despite the interest shown by contractors in offering equipment and new concepts, Vatn says he is concerned that no one has so far defined the design criteria for such a vessel. In particular, there has been little talk about what happens in an emergency situation when the vessel has to disconnect in a hurry while maintaining the safety barriers in the well.

"My signal to contractors is to wait until we have established the design criteria for the different concepts," he says. "We have to have a system that is safe and environmentally acceptable."

Technology development aimed at making subsea wells more intervention-friendly would be beneficial, Vatn says. One priority is to find a completions system that would reduce maintenance costs by utilizing a smaller hanger.

Statoil's experience is that more intervention is required as a well gets older. Cost reduction is therefore an important issue from the point of view of mature asset management. Lower costs imply a longer producing life for the well, and ultimately for the field.

There are further complications to be dealt with, such as the variety of subsea equipment installed.

In the longer-term, Vatn sees possibly even greater cost efficiencies in designing wells that will not require any intervention. It's a challenge, he says, but a realistic one.