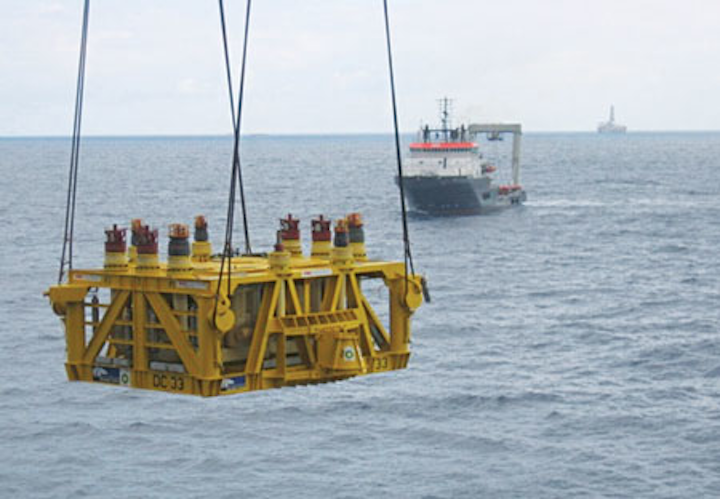 The $15-billion project is under development with production slated to begin by the end of 2017. The fabrication portion of the project is scheduled for completion by the end of 2016 while integration work will start in January 2017. Total serves as the operator of the field with a 24% stake. Partners include CNOOC (45%), Petrobras (16%), and Sapetro (15%).

This project is the first major deepwater development in Nigeria since the Nigerian Content Act was signed into law in April 2010. According to Total, this meant that the requirements of the act were integrated into the project from the beginning and fully embedded in the scope of work of each of the contract packages.

"The Egina project takes technology and skill transfers to a new level," Total stated on its website, "giving Nigeria the full benefit of Total's deep offshore experience and expertise. At the end of 2017, the start-up of the Egina development will reinforce Nigeria's deepwater production potential."

Locally-worked hours will reach about 75% for Egina as part of a plan to boost local content of Nigerian projects, Total added. Development of this project is expected to employ 1,500 people at its peak construction period.

Total said: "All the basic engineering work was done locally - a first in Nigeria. Total successfully met this 'sustainability target' by ensuring teamwork between international companies and local contractors to accelerate the pace of technology transfer and the training of the local workforce."

Egina, situated 20 km (12 mi) southwest of the Akpo field complex in the same license, was discovered in December 2003 with the Egina-1 well. Following the discovery, the appraisal well Egina-2 was drilled in October 2004, which was followed by further seismic processing and drilling of three additional wells within September 2006 and January 2007. The light oil is rated at 28° API, and the estimated reserves are in excess of 550 MMbbl.

Originally, Total planned to develop the Egina field as a subsea tieback to the Akpo FPSO. However, after the field yielded several promising discoveries, the operator decided Egina was suitable for stand-alone development. Basic engineering studies of the field commenced in 2008 and a range of field development options for the field were assessed, but the operator chose an FPSO development option, which received a green light from the Nigerian authorities in 2009.

The field's infrastructure will consist of a subsea production system tied-in to an FPSO unit with a processing capacity of 200,000 b/d and a storage capacity of 2.3 MMbbl. The production system includes risers; 52 km (32 mi) of oil and water injection flowlines; 12 flexible jumpers; 20 km (12 mi) of gas export pipelines; 80 km (52 mi) of umbilicals; and subsea manifolds.

In July 2010, J P Kenny and MCS Kenny, part of Wood Group, alongside Dover Engineering, completed the first comprehensive front-end engineering and design (FEED) undertaken locally in Nigeria for the Egina field development. Total Upstream Nigeria Ltd. awarded the FEED to Dover Engineering in July 2009, and Dover contracted J P Kenny and MCS Kenny to support the project delivery. The subsea scope of work included comprehensive design studies and engineering assessments; development of specifications; documentation and technology studies relating to the design of the umbilicals; flowlines; risers; and the subsea production system of the field's development.

In June 2013, Saipem received a $3-billion engineering, procurement, fabrication, installation, and pre-commissioning contract for the project. Most of the fabrication is being performed in Nigeria, with marine installations to follow during 2016 and early 2017. The entire Egina UFR (umbilicals, flowlines, and risers) project is run from Saipem Contracting Nigeria's premises in Lagos, and most of the engineering is being performed in Nigeria, either in-house by Saipem or by DeltaAfrik Engineering Ltd.

Also in 2013, FMC Technologies received a $1.2-billion engineering, procurement, construction, and commissioning contract to provide subsea production systems for the project. FMC Technologies subcontracted Aveon Offshore in January 2014 to provide fabrication services for the subsea structures in the field.