TechnipFMC’s North Sea Giant is one of the largest subsea construction ships ever built. To help achieve a maximum safety and service life for the vessel’s crane, Tsubaki Kabelschlepp supplied a specially adapted cable carrier for routing the hoses to the crane. 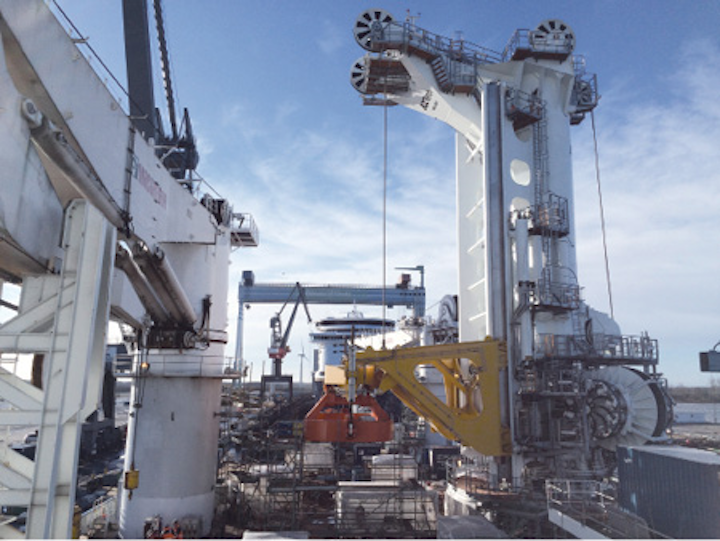 TechnipFMC’sNorth Sea Giant is one of the largest subsea construction ships ever built, with a length of 161 m (528 ft) and a breadth of 30 m (98 ft). It is equipped with two cranes, driven by five Voith Schneider propellers, and is designed for extreme deployments in high seas.

AXTech in Molde, Norway, supplied the 420-ton lift capacity SHS tower crane for installing and maintaining subsea structures, which has a movement span of 180°, allowing heavy equipment to be lifted from the deck into the sea. Transportation of the loads is ensured by more than 15 hydraulic hoses rated to around 450 bar (6,526 psi). Due to the crane’s circular movement, it is necessary to guide the hoses during operations to ensure a secure power supply to the crane. The combination of extreme sea conditions and swinging loads makes this power supply a critical interface in ensuring the function and safety of the entire facility. 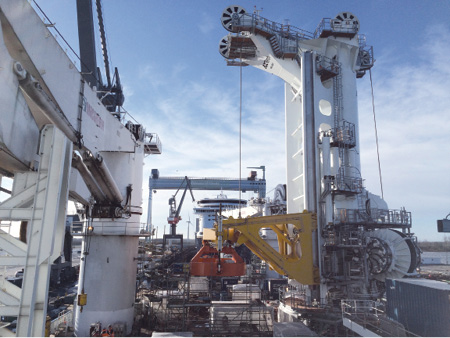 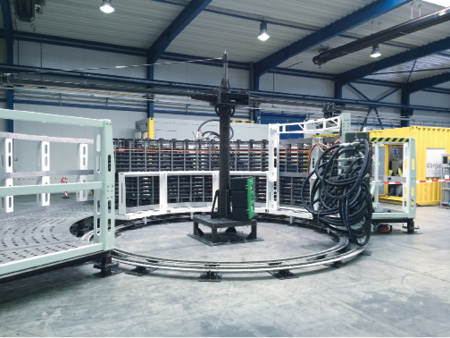 To help achieve a maximum safety and service life for the crane, a cable carrier was the chosen method for routing the hoses, supplied by Tsubaki Kabelschlepp. The system is configured to guarantee the power supply to the base of the crane, a few meters above the water level, at any time, and to withstand regular exposure to salt water. The system must also guarantee the necessary stability required due to the ship’s movements in rough seas.

When planning started for the solid stainless steel cable carrier, construction space restrictions on the vessel’s deck necessitated an adaptation of the design of system and its supporting structure. This led to a solution developed in close co-operation with the client’s various technical departments, using 3D simulations to comply with construction space specs and to model the impact of the harsh conditions.

Production of all parts of the cable carrier was strictly controlled and inspected to ensure the required quality. Due to the environmental conditions and the potential risks posed by a failure of the cable carrier, each screw was subject to a burden-of-proof of meeting the customer’s needs.

To ensure the reliability, stability and functionality, the entire cable carrier system was installed and tested at Tsubaki Kabelschlepp’s facility, witnessed by AXTech and its end-customer Statoil during a factory acceptance test. The test set-up and process were subject to stringent safety precautions. Within the scope of testing, a high-pressure test was stipulated of the hoses while moving the cable carrier. In this instance, the tubes were filled to a rating above 450 bar to simulate actual conditions on board.

Tsubaki Kabelschlepp was also responsible for installation and commissioning of the system: due to time pressures and installation costs at the offshore location, the company was asked to speed up the installation from the originally estimated 15 days. It responded by engineering the steel structure in a way that facilitated pre-assembly in a construction hall in order to subsequently raise these various parts onto the ship in the shortest possible time and with only three lifts. In this way, both the assembly time and the resulting costs were drastically reduced.

The stability and load-carrying capacity of the system were tested in advance using modern calculation programs to ensure the safe lifting process from land to ship. Using a highly variable mounting system, the entire system was installed on board the North Sea Giant quickly and safely and below the predetermined tolerance conditions. The vessel has since been operating offshore for two years successfully with the new crane system.