Platform support vessels equipped with ROVs could be used to help contain blowouts more rapidly. New standards are emerging to ensure that BOP rams lock in a well as fast as possible. 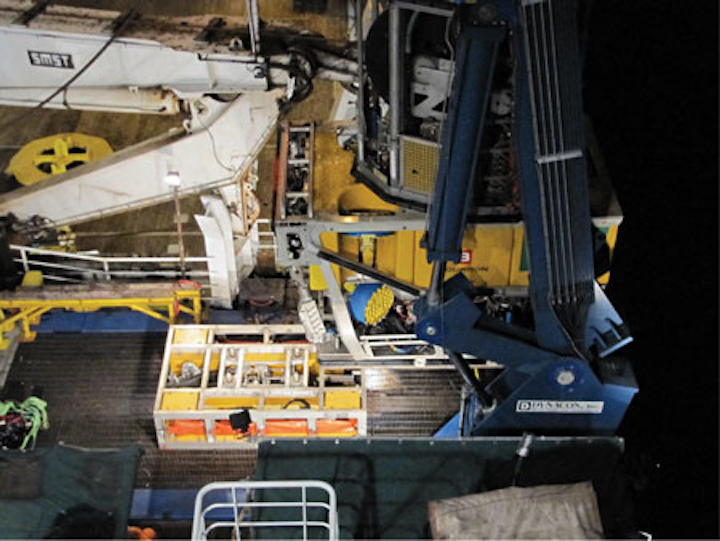 Platform support vessels (PSVs) equipped with ROVs could be used to help contain blowouts more rapidly. New standards are emerging to ensure that BOP rams lock in a well as fast as possible. As a double safeguard, rig operators are considering stationing ROVs on support vessels to undertake blowout prevention if the rig crew are unable to activate the BOP at the wellhead.

FollowingDeepwater Horizon, the American Petroleum Institute (API) issued a new industry standard in 2013 (standard 53) that introduced tighter norms for BOP response. In particular, it called for BOP equipment to be capable of closing off the well pipe using shear rams in less than 45 seconds: after this period, the build-up of flow across the rams can negate the capabilities of the elastomer seals to secure the integrity of the well.

This created challenges for ROV operators and skid manufacturers. BOP equipment on the seafloor can provide hydraulic fluid to generate sufficient pressure in the rams to close a pipe. However, it is more difficult for ROVs to generate the same flow and pressure.

BOURBON has recently completed the integration of its HD ROVs, supplied by FMC Technologies Schilling Robotics, to interface with a BOP intervention skid. This has entailed using the main hydraulic circuit of the HD ROV to provide maximum flow and pressure from the high-efficiency 150-hp hydraulic power unit.

Another consideration is configuring the ROVs to carry a BOP skid 365 days a year, if need be. Supporting the skid, which typically weighs around 1.5 metric tons (1.65 tons), is not an issue as buoyancy neutralizes the effect of its weight in water. Typically, ROVs can handle loads weighing up to 3 metric tons (3.3 tons).

However, the skids have to fit comfortably below the vehicle so that they do not impede its day-to-day operations. For the time being, BOURBON is adapting its own solutions and ROVs to standard skid designs, but its partners are working on a new skid design that will combine compactness, maintainability, and performance.

The next priority is to ensure that the ROV/skid combination can function in the conditions for which it was designed. This involves comprehensive testing and dry runs both in a controlled onshore environment and offshore. This will be followed by a deepwater test staged with a major oil company in which the BOP skid will be deployed and attached to an operational wellhead. Although there have been independent tests of the ROV and of the pump, only by testing the integrated system in actual seabed conditions at the wellhead can the operator be certain that the equipment will work as it should.

During a live test with a UHD ROV, each stage of the BOP lock-in operation was conducted, stopping only at the point at which the shear ram would have to be activated to cut the drill pipe. Future studies will include how to increase fluid flow in order to shorten the time taken to lock in the BOP.

With continuing pressure to reduce capex, increasing PSV/ROV support to allow a BOP skid to be on permanent stand-by during well operations may not be a priority for some operators or contractors, especially if existing equipment on the rig is deemed adequate. However, the environmental and financial costs of theDeepwater Horizon accident suggest that this extra safeguard may well prove to be worth the added investment.

If BOP skids do become more widely used, the opportunity for the industry to collaborate on standardized products, parts and maintenance should also grow, leading to deployment of skids anywhere in the world at potentially lower cost.