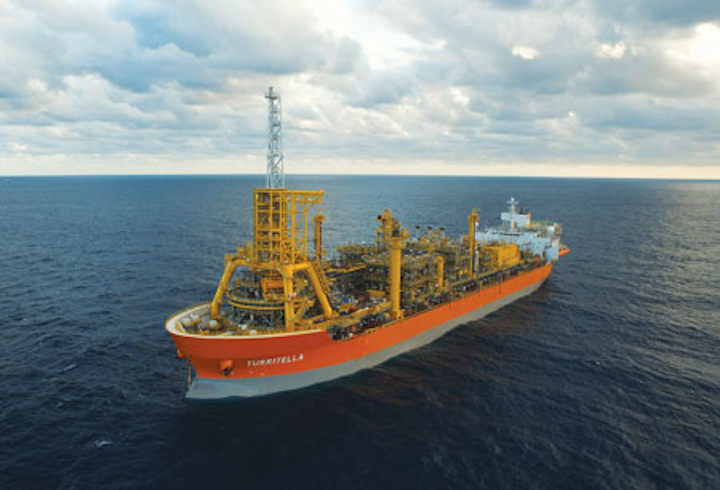 In 2005, the Transocean semisubmersibleDeepwater Horizon drilled the discovery well in Walker Ridge block 508 in 9,576 ft (2,919 m). Later that year another Transocean vessel, the Discoverer Spirit drillship, pushed the Stones-2 well to a true vertical depth of 28,560 ft (8,705 m). This well confirmed the presence of several hydrocarbon-bearing sands in the Lower Tertiary. In 2008, the Stones-3 exploration well reasserted the multiple oil-bearing sands. Stones is estimated to contain more than 2 Bboe in place.

In May 2013, Shell, 100% owner and operator, sanctioned the Stones project. The phased development consists of two subsea production wells tied back to an FPSO vessel. Six further production wells will be added later, and multi-phase seafloor pumping is planned for a later phase. The reservoir depth is about 26,500 ft (8,077 m) below sea level and 17,000 ft (5,181 m) below the mudline. By the end of 2017, first phase production is expected to reach 50,000 boe/d with recoverable reserves of 250 MMboe. Tankers arrive every few days to transport crude oil from the FPSO to US refineries along the Texas and Louisiana coast. The associated natural gas is transported by pipeline into the closest gathering system.

According to the operator, the project features a more cost-effective well design, which requires fewer materials and lowers installation costs; this is expected to deliver up to $1 billion reduction in well costs once all the producers are completed.

The centerpiece of the Stones project is theFPSOTurritella. Not only is this Shell’s first FPSO in the Gulf of Mexico, but also it is the deepest production unit ever installed.

In July 2013, Shell Offshore Inc. contracted SBM Offshore to supply and lease an FPSO under an initial 10-year charter. This is the first project awarded as part of the enterprise framework agreement, signed by SBM Offshore and Shell in March 2012, for the supply of medium and small FPSOs on a lease-and-operate basis. In September 2013, SBM Offshore hired Keppel Shipyard to convert a Suezmax tanker into a SBM Offshore Generation 2-design FPSO. The yard’s work scope included refurbishment and life extension works; upgrading of living quarters; fabrication and installation of the internal disconnectable buoy system and topsides module supports; as well as the installation and integration of topsides modules.

TheTurritella, the second FPSO in the Gulf of Mexico, has a processing capacity of 60,000 b/d of oil and 15 MMcf/d of gas treatment and export. The hull is able to store 800,000 bbl of crude oil. The vessel features a turret with a disconnectable buoy (buoyant turret mooring) that allows it to weathervane in normal conditions and disconnect from the vessel upon the approach of a hurricane. This detachable capability allows the FPSO to quickly resume production once calm weather returns. According to SBM Offshore, at 82-ft (25-m) tall, 82-ft in diameter, and weighing 3,150 metric tons, not only is this the world’s largest disconnectable buoy, but also it is the first with steel lazy wave risers -- steel pipe with in-line buoyancy that absorbs the vessel’s motion and boosts riser performance at extreme depths. The buoy is secured to the seabed by suction piles and nine mooring lines consisting of chain and polyester, arrayed in three bundles of three. The mooring system also incorporates the ability to adjust line tension during operations by use of an in-line mooring connector.

Once theTurritella arrived in the Gulf in January 2016 and the buoyant turret mooring was recovered by the FPSO, InterMoor’s work scope consisted of chain final tension adjustments through the in-line mooring connector system, subsequent cut and removal of excess chain, and riser pull-in rope stretching and transfer to the FPSO. Acteon sister companies worked alongside InterMoor on the project, which was completed in June. UTEC provided the positioning survey for the vessel and Mirage custom-designed and fabricated the diamond wire cutting saw and clamping system.

As part of the second phase of development, OneSubsea will supply subsea processing systems. Following a technology qualification program, the company will deliver the industry’s first 15,000-psi subsea pump system, which will be tied back to the FPSO. The subsea processing systems scope includes a dual pump station with two 3-MW single-phase pumps and two subsea control modules, a topsides power and control module, a barrier-fluid hydraulic power unit with associated spares, as well as installation and maintenance tools. Manufacturing and testing is under way in Horsøy, Norway. Delivery is expected in 2018.