Rubber components from Trelleborg Bakker have been designed to safeguard the performance of Remora ASA’s HiLoad offshore loading system. 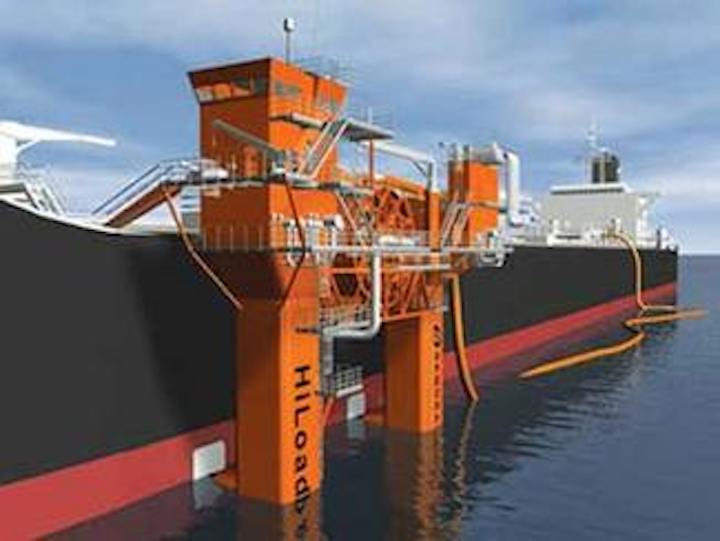 Rubber components from Trelleborg Bakker have been designed to safeguard the performance of Remora ASA’s HiLoad offshore loading system. During cargo transfers from FPSOs, the components damp the impact between the HiLoad and tanker, effectively ‘locking’ them together and thereby avoiding structural damage to the tanker hull.

The L-shaped HiLoad can be attached to virtually any tanker without modification, and with no requirement for manual operation in the wave zone. The system operates in similar fashion to a forklift truck picking up a pallet, its horizontal part being driven beneath the ship.

As the HiLoad unit is de-ballasted and starts moving towards the tanker bottom, seals contact the hull to form six closed compartments, or cofferdams. Water in the cofferdams is then drained, with air admitted via an open-air vent to the surface - this ensures that pressure of the trapped air becomes atmospheric (1 bar).

Hydrostatic pressure acts on the top of the HiLoad pontoon and is transferred to the tanker hull through the Trelleborg Bakker rubber sealing components. By engaging the attachment system, the HiLoad becomes “locked” to the tanker with several thousand tons of clamping force, ensuring it does not come loose during operation. Subsequently, the HiLoad and the tanker act as a homogenous unit  so even when subjected to strong waves, winds and currents, there are no opposing forces between the two structures that could either damage them or impair efficiency of the offload operation.

Unlike some other offloading systems, HiLoad can also be deployed at night or in poor weather. This can be a major advantage to FPSO operators, as minimizing downtime during the offloading operation brings significant cost benefits.

Trelleborg Bakker engineered the materials for the rubber components that are integral to the attachment and the locking process to operate in pressures up to 4 bar and in temperatures from 0 to +45° C (32 to +113° F). The components are based on proven technology with Gina seals installed on immersed tunnels.