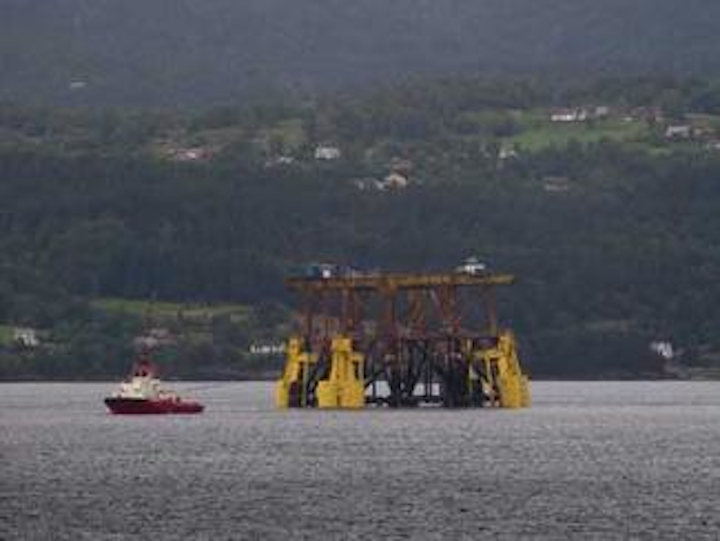 Last year Aker Solutions successfully deployed a new jacket removal method to remove the DP2 jacket from Total’s Frigg field in the Norwegian North Sea. With the aid of buoyancy tanks, the jacket was floated clear of the seabed and towed ashore without major incident.

Once parked in the sea off Aker Solutions’ decommissioning site at Stord in western Norway, the jacket was cut into pieces before disposed on land.

The patented re-floating technique thereby has proved itself as an alternative to conventional heavy-lift methods to remove redundant jackets.

“The flotation operation went perfectly, and from an HSE point of view, everything was fine,” says Serge Vivet, Total E&P Norge’s deputy project manager for the Frigg Cessation. “Aker Solutions did a really good job, and I hope the method will be used again.”

Contractors have invested a lot of time, money, and mental energy in trying to develop cost-effective alternatives to conventional heavy-lift methods of removing offshore platforms, with financial support from Total and other oil companies. So far Aker Solutions’ method is the only one to have been applied in the demanding conditions of the North Sea.

Jan Rødseth, the company’s project manager for the DP2 removal program, confirms that other companies have expressed interest in the method, which it will presenting this year both at conferences and to the Norwegian Oil Industry Association (OLF).

Aker Solutions is grateful to Total, he adds, for the opportunity to develop and apply the re-floating technique.

This came about in 2004 when a consortium led by the company was awarded the whole scope of the Frigg Cessation project, including removal of the DP2 jacket. The assignment was won against competition from established heavy-lift and new single-lift contractors.

Aker already had experience, including re-floating in 2001 of Phillips’ Maureen platform, a steel gravity-base structure in the UK sector. The platform then was towed across the North Sea to Stord for disposal. Some personnel from the Maureen project also were involved in the DP2 project and others were consulted.

The eight-leg DP2 jacket, installed in 1976 by barge-launch and ballast into position, weighed around 9,000 metric tons (9,920 tons) and stood 123 m (404 ft) tall, with a footprint of 62 x 43 m (203 x 141 ft). Removal by heavy-lift would have meant cutting it into two or more pieces underwater. In the event it was re-floated with the module support frame (MSF) still attached, with a heavy-lift removal the frame probably would have been lifted separately.

Aker Solutions’ procedure is simple in concept but proved to be more complex than expected during detailed engineering, according to Vivet.

This re-floating method uses four buoyancy tank assemblies (BTAs), one attached to each corner leg. Each BTA consists of two cylindrical buoyancy tanks, each measuring 53 m (174 ft) long and 6.6 m (21.7 ft) in diameter, fixed together side by side. All tanks are divided into an upper and a lower compartment, with a series of valves allowing sea water entry during ballasting, and pumping in of pressurized air to expel water during deballasting.

On the upper end is an equipment and instrumentation room for implementing ballasting and de-ballasting, and for operating the clamps and pull-in jacks that attach the BTA to the jacket leg. Operations are controlled and powered remotely from a command vessel through an umbilical and hoses. These were connected directly to the BTA during the attachment operation, and via a manifold installed on the MSF during the re-float and tow.

The overall height of each BTA is 65 m (213 ft), the weight in air about 1,000 metric tons (1,102 tons). Total tank volume is 3,625 cu m (128,016 cu ft). The units were built and outfitted by Bladt Industrier in Denmark. The clamp systems and jacks were supplied by IHC, and the rubber elements by Trelleborg Viking in Norway  the latter were used as fenders and placed within the clamps and upper and lower guides to deflect loadings.

The first BTA was delivered to Aker Solutions for sea trials in 2007, and then returned to the yard for some modifications.

The mating operation to position a BTA to one of the corner legs without any damage to the integrity of the jacket was not easy, especially as a positioning accuracy of ±15 mm (0.6-in.) was required, and the weight of each assembly now included 3,000 metric tons (3,307 tons) of ballast water.

Each BTA was guided into position using lines attached to a vessel on either side; the offshore support vesselBotnica, acting as the command vessel, and Nordica. A pull-back line was attached to a small tug stationed behind the BTA.

An upper and a lower guide at the top and bottom of each BTA directed the assembly into position on the leg. Contact first was made at the lower guide. As contact was achieved at each guide, the mating clamp automatically closed around the leg, reducing horizontal movement. Pull-in jacks were activated to further reduce movements.

The BTA now was de-ballasted until the firm contact of 600 metric tons (661 tons) uplift was established between it and a hinged bracket structure at the top of the leg  calculations indicated that the legs would not be able to take the bending moment generated by the BTAs during refloating, so a bracket was welded to each leg to take this loading.

The pull-in jacks now were operated again, pulling the BTA into the correct position, tight against the leg. By activating the two friction clamps in the mid-section of the BTA, the main holding force was established. The pull-in and friction clamps were operated from the command ship once the mating clamp closed. A clear learning process was observed in the operation of docking the BTAs and locking them into place, according to Rødseth. From 40 hours for the first one, the time was reduced to 24 hours for the fastest one.

With all four BTAs attached to the jacket legs, the control cables and hydraulic hoses were routed through the manifold pre-installed on the MSF. This was one of the riskier points in the operation as it involved landing personnel from small boats. An additional access ladder was pre-installed to facilitate disembarkation and re-embarkation. There were no incidents during this operation.

Before re-floating began, the towing vessels attached lines to the jacket to ensure it remained stable. At this point, the jacket was held in place by just four of the original 20 piles, the others having been previously cut. With only 600 metric tons (661 tons) of buoyancy from each BTA before the last piles were cut, the jacket was resting firmly on the already cut piles  enough to hold it stable without causing any sudden movement when the final pile was severed.

Once the jacket was no longer fixed to the seabed, the BTAs were further de-ballasted to raise the deepest part of the platform to the towing height of 10 m (33 ft) above the seabed. It took eight hours to achieve lift-off from the piles and another six hours to reach 10 m clearance from the seabed. The weight of the jacket floating in the water, including the MSF and marine growth, was around 11,600 metric tons (12,787 tons).

During the tow, two vessels pulled from in front, one of them theNordica, while two vessels, one on either side, ensured the jacket did not drift from the chosen course. The rear of the convoy was brought up by Botnica, which surveyed all the pipelines crossed to establish that no damage had been caused. Pre-tow and post-tow surveys were carried out, the latter to confirm that no objects had been dropped on the way.

The journey to Stord, a distance of 120 nautical miles, took two and a half days. On July 16, the convoy reached its destination, and the jacket was set on the seabed where the water depth was 90 m (295 ft). In early November, after the BTAs had been removed, demolition began using one of Smit’s inshoreTaklift cranes. The MSF was lifted off first and transported to shore. Then the structure was cut horizontally into pieces weighing about 1,000 metric tons (1,102 tons), with each piece taken to shore by barge.

The re-float and tow were done on schedule, says Rødseth. A significant amount of preparatory work was necessary, some of it in connection with the BTA method: all obstructions on the legs where the BTAs were to be attached, including pile-guides, anodes, electrical cables, and marine growth, had to be removed. Some preparatory work was done independent of the removal, such as the securing of loose items, and the disconnection of pipelines and cables which were protected by a concrete saddle at the foot of the jacket.

In addition the piles had to be cut 1 m (3.28 ft) below the mudline. This was demanding and required a seabed excavator to clear an area large enough to allow access to the ROV with the diamond-wire cutting spread. All subsea operations were performed diverless.

“Although this method needed a lot of offshore jacket preparation, the BTA installation, the refloat of the jacket, and the towing went extremely well,” says Vivet. “The advantage of the method is that no heavy-lift vessel support is needed. The method has been demonstrated to be attractive but needs to be followed up with an effective way of transferring the jacket to the disposal quay.”

Vivet believes the best solution would be to land the jacket in one piece  demolition operations are safer and more cost-effective onshore. During the project Aker Solutions started development of a reverse launching method using strand jacks on the quay to tilt the jacket and enable a barge to float underneath. The work, which included model testing in France, was partly funded by Total. However, work stopped before conclusion when the team opted to dissect the jacket in the water.

The BTAs are available for re-use. With their dimensions, they could re-float jackets weighing between 6,000 and 18,000 metric tons (6,614 and 19,842 tons), depending on the floating capacity in the legs, says Rødseth. Further, BTAs with different dimensions and lifting capacities also could be built.