Electromagnetic data (EM) can be a valuable resource for identifying exploration targets. 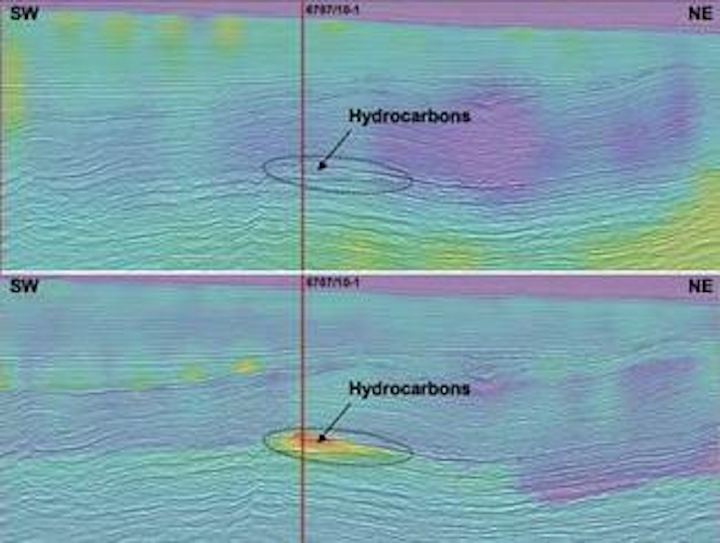 Electromagnetic data (EM) can be a valuable resource for identifying exploration targets. However, the industry needs to develop expertise in processing and interpreting such data, according to Rocksource Chief Executive Officer Trygve Pedersen.

Rocksource is one of Norway’s newest oil companies. On its establishment in 2004 it acquired initial EM research developed at the University of Bergen, along with two key figures in this discipline, professors Jonny Hesthammer and John Howell, now vice presidents for technology and production.

The company’s processing department is in Bergen. Its payroll of 47 includes 30 G&G professionals, 16 with doctorates. “Our idea was to convert the basic research into applications which we could use as an oil company,” says Pedersen. “We believe we have now developed a set of tools which give us a competitive advantage in making exploration decisions.”

Rocksource’s expertise lies in proprietary techniques and software, including advanced inversion algorithms, which it has developed for handling EM data for decision-making purposes. Allied to this are strong seismic interpretation and reservoir management skills. It is crucial, in Pedersen’s view, to be able to integrate different data  including EM, seismic, and well data  to derive the optimum picture of the subsurface. “There is no single data source which gives perfect information,” he says.

And even when all sources of information have been fully exploited, there will still be no 100% certainty that drilling will yield hydrocarbons. Rocksource sets its sights a little lower, and in Pedersen’s view more realistically. “If you can increase the chance of success from 1-in-5 to 3-or 4-in-5, that’s game-changing,” he says.

Rocksource’s work processes have been verified with numerous well and seismic data sets, with encouraging results. In one case, the company was given access to the EM data for a structure that had been drilled. The operator’s own interpretation using conventional EM processing yielded no significant response, but when Rocksource put the data through its own work-flow and algorithms, it obtained a very nice match with the structure.

Pedersen says he is surprised to see few companies putting serious effort into understanding EM as part of the work processes. After all, it is an accepted fact that expertise needs to be developed for handling seismic data, so why should this not be the case with EM also?

Hydrocarbons are resistive, and the resulting resistivity contrast to surrounding rocks causes energy to be reflected back to EM receivers on the seabed. But positive readings can come also from salt, carbonates, and volcanic rock. The reliability of the interpretation also can vary significantly, depending on diverse factors such as the depth below the seabed and the geological complexity.

It is possible therefore to end up with false-positives  the interpretation of a hydrocarbon reservoir where none exists  or false-negatives, i.e. failing to identify hydrocarbons due to ambiguous or misleading data. Pedersen believes that Rocksource’s disciplined approach enables it to avoid such false turnings. This includes detailed pre-acquisition analyses to ensure that the EM data provides the results required for decision-making.

The proof will come when the company starts to drill. Although it has not yet reached that point, it has taken steps concerning the two licenses it was awarded in Norway in 2006. On the basis of EM surveys, it has decided, together with its partners, to relinquish production license PL 441, covering blocks 3/2 and 5 in the south of the Norwegian North Sea, as no satisfactory indication of hydrocarbons was found.

In the case of PL 416, however, covering block 31/8, interpretation of the EM data was positive for the main prospect, Breiflabb, being hydrocarbon-rich. This led the partners to commit to a 3D seismic survey, the results of which will form the basis for a drilling decision.

The company was awarded three mature acreage licenses in Norway’s recent APA 2007 round, including its first as operator. On one of these licenses an EM anomaly associated with the main target already has been identified.

Organic growth tends to be slow, so Rocksource is looking to accelerate the process by forming partnerships with big companies. In January, for instance, it signed a co-operation agreement with ONGC. The Indian state oil company also has strong faith in the potential of EM, and has acquired EM data over numerous prospects offshore India. The partners are looking to apply Rocksource’s expertise in prospective areas on ONGC’s extensive acreage, while also evaluating possible joint applications in India’s upcoming licensing round, NELP VII.

Another way forward is through business development projects. Rocksource is offering to perform an EM survey on third-party acreage in the Norwegian sector which it identifies as prospective, in exchange for involvement if the survey produces positive results.

The company has also secured cash flow by transferring North Sea processes to the New Ace gas field in Texas. Here it devised a new development plan using a complete 3D geomodel incorporating seismic and well data, and identified fresh reserves at Drews Landing. By January production, which had dwindled to 50 boe/d, was back up to 2,100 boe/d.