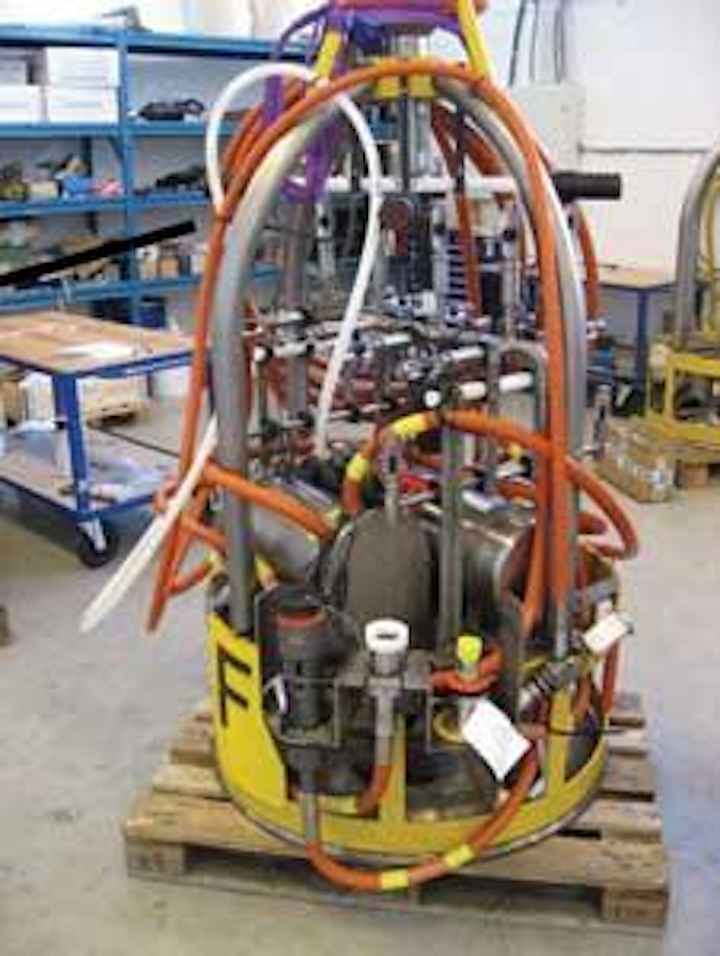 Bjørge’s Naxys technology for subsea leak detection and condition monitoring is finding acceptance in the Norwegian sector. Development of this technology started around 10 years ago, according to managing director, Cato Bjelland. Naxys is named after the company that first developed it, which was acquired by Bjørge in 2005.

The product portfolio consists primarily of monitoring systems using acoustic and electro-magnetic sensors. The initial development was an acoustic leak detector. When a leak develops, a stream of fluid is created. This leads to pressure fluctuations that generate an acoustic field which propagates in the water and can be detected by a hydrophone.

By using hydrophones and some local analytical capability, the direction from which the sound is coming can be identified. This is indicated by dividing the area around the sensor package into sectors of 20º.

The same sensors can be used for online monitoring of subsea equipment such as pumps which generate an acoustic field as they vibrate. This field is converted by the Naxys software into a frequency spectrum. Once the baseline pattern of the frequency spectrum associated with normal functioning has been identified, departures from normal functioning can be detected as deviations.

The technology also includes electro-magnetic antennas. These sense the electric field generated by electric equipment such as a motor driving a pump. Analysis of the readings makes it possible to identify patterns of normal functioning and also deviations.

More information can be generated by combining the acoustic and electro-magnetic data, says Bjelland. In the case of an electric motor, for example, an increase in the slippage factor may indicate malfunction.

Data analysis is in real-time by software installed in the Naxys module. The signals are transformed from time to frequency domain by a Fourier transformer. Analysis of the spectrum can be made the basis for intelligent decisions, such as sounding an alarm or triggering an automatic shutdown in the event of patterns indicating a malfunction or accident.

When the limit of the system’s memory has been reached, the accumulated data has to be transmitted to the surface. This may be either through a dedicated fiber-optic cable or via a connection to the subsea control pod and then through the existing communication system.

As seabed-to-surface communications capacity grows, driven in part by the need for systems like Naxys, the growing volume of information can become the basis for expanded functions, says Bjelland.

The system was tested in situ by having an ROV create an artificial leakage, and responded as intended. Through FMC, leak detection and condition monitoring systems are to be supplied to the subsea production systems for the second phase of Ormen Lange development, the Shell-operated Ormen Lange Southern, and to StatoilHydro’s Vega project.

Another Naxys technology is available for pipeline monitoring. This application was initially developed for monitoring the behavior of free spans on Norsk Hydro’s Ormen Lange pipelines. Sensor packages consisting of a tri-axial accelerometer, a processor, and a flash memory are held in clamps attached to the pipeline at intervals. These packages communicate with a master package installed on the seabed about 50 m (164 ft) from the pipeline. Both the clamp packages and the master package have a transponder and a clock so their position relative to each other is known at all times.

By monitoring the position of the clamps from the master package, vibration of the pipeline can be detected, as well as its strength. The vibration mode can also be identified, as each mode has a characteristic wavelength or frequency.

Energy for the sensor packages is from lithium batteries. Measurements are taken only as required. The power requirement is small, so the system can function for a good couple of years. Other sensor packages such as metocean meters can be included in the master package to monitor, for example, parameters such as current and salinity.

The Naxys pipeline monitoring system also has been ordered for Ormen Lange Southern. The systems installed so far have been used only for offline monitoring, with the data being streamed to the surface at intervals. It is now being developed for online use, Bjelland says.

The company also is developing a subsea test facility in the fjord close to its works in Bergen in western Norway. It is due to be fully up and running by year-end. Given the current rapid development of subsea technology, it is widely felt in the industry that there is a lack of suitable subsea test facilities, and Bjørge plans to make its facility available to third parties.