Prosernat, a subsidiary of Heurtey Petrochem and IFPEN, has long experience developing glycol-based regeneration systems for offshore and onshore projects such as Ormen Lange in the Norwegian Sea. 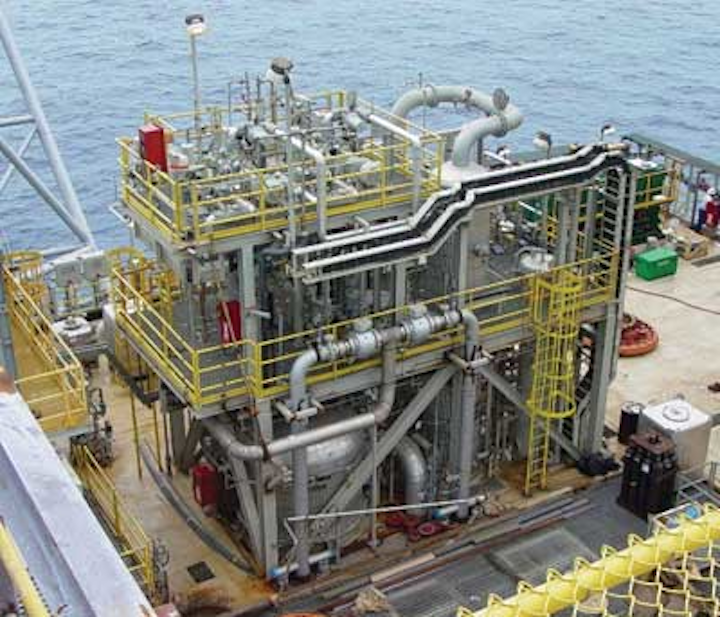 In the early days of deep-sea production, the formation of hydrates in deep-sea gas flowlines was typically inhibited by injecting TriEthylene Glycol (TEG) or methanol at the subsea manifold. However, this often led to gelling of the TEG at the manifold or in the delivery umbilical, and the recovery of only small volumes of methanol.

CCR Technologies (CCR) was instrumental in moving the offshore flow assurance mindset away from TEG and methanol toward MonoEthylene Glycol (MEG) as the preferred hydrate inhibitor for multi-phase tieback production lines. The Calgary-based company initially developed mobile reclaiming units to purify and reclaim high-value chemicals for refineries in the late 1980s. Its first application of the technology offshore was in 1999 at Shell's Mensa WD-143 project in the Gulf of Mexico, the world's deepest offshore development at that time.

The Mensa MEG Reclaiming Unit (MRU) remains in service today, and CCR has since engineered additional offshore installations at the Na Kika and Red Hawk fields in the Gulf, and others at onshore terminals in Hammerfest, northern Norway, processing gas from the Snøhvit subsea-shore project in the Barents Sea, and on Sakhalin Island in eastern Russia, handling production from the offshore Sakhalin II fields. The largest MRU worldwide is under construction at Saudi Aramco's Wasit Gas Plant in Saudi Arabia, treating a rich MEG capacity of 4 x 66 cu m/hr.

In subsea developments, the injected MEG is contaminated by salts (from formation water), water (formation and condensed water), and other unwanted by-products such as pipeline scale. The water can be removed by a conventional MEG regenerator (kettle re-boiler style), but this still leaves other contaminants such as salts and solids in the regenerated lean MEG. Over time, these will build up and deposit on process components, causing accelerated corrosion in topside equipment and subsea pipelines.

Conventional regeneration of glycols at elevated pressures involves boiling at an appropriate temperature with a heating medium that will concentrate the MEG to its original level for re-use as the hydrate inhibitor. However, the higher temperatures required for the reclamation can cause thermal degradation of the glycols and contribute to corrosion through the formation of acid degradation products. Eventually the salts remaining in the glycol increase to unmanageable levels.

As a solution, Prosernat proposes CCR's proprietary vacuum distillation process with a novel heater design. With this combination, elevated film wall temperatures and long residence times do not occur and bulk fluid and skin temperatures are kept close to each other, inhibiting scaling tendencies. The CCR design also operates with free salts in the heater loop that gently polish the exchanger and piping internals, further reducing any scaling tendency. The technology can control the free solids content in its recirculation heater loop to within 1 wt%, depending on requirements and the chosen solids disposal route, the design can be adjusted to provide virtually-liquid free solids to fully-dissolved salt solution concentrates for final disposal.

Each individual MEG regenerator and reclaimer unit takes into account the rich MEG physical and chemical composition, the projected volumes, and the targeted quality of lean MEG to be returned subsea. Typical configurations (with benefits and drawbacks) can include:

Configuration 1 results in the lowest capital and operating cost, as there are no salts or contaminants in the rich MEG other than the condensed water from production. However, this configuration also provides the lowest flexibility to react to changes in the formation water. As soon as any contaminants such as formation salt enter the system, they will begin to accumulate and foul the regenerator. The good news is that a reclaimer can be retrofitted into the system as long as plot space and utilities are available.

Configuration 2 can best be applied when the amount for formation salts is relatively low. This configuration includes a small reclaimer which processes only a portion of the lean MEG exiting the regenerator. The system can be adapted to accommodate a small future increase in formation salts.

Configuration 3 is similar to Configuration 2, except that here the reclaimer treats 100% of the lean MEG exiting the regenerator. This system is almost immune to changes in salt levels in the formation water, and can be operated as a slipstream unit (like Configuration 2) at any time without any changes to the equipment design.

Finally, Configuration 4 is an integrated unit combining the regeneration and reclamation processes into a single step. It is best suited to applications where the flow rate of rich MEG is relatively low compared to the level of contaminants in the feed to the unit. Pre-treatment (removal of low soluble salts) is not needed.