Anti-wear coatings specialist Technogenia is working on new processes to improve the durability of drilling tools. 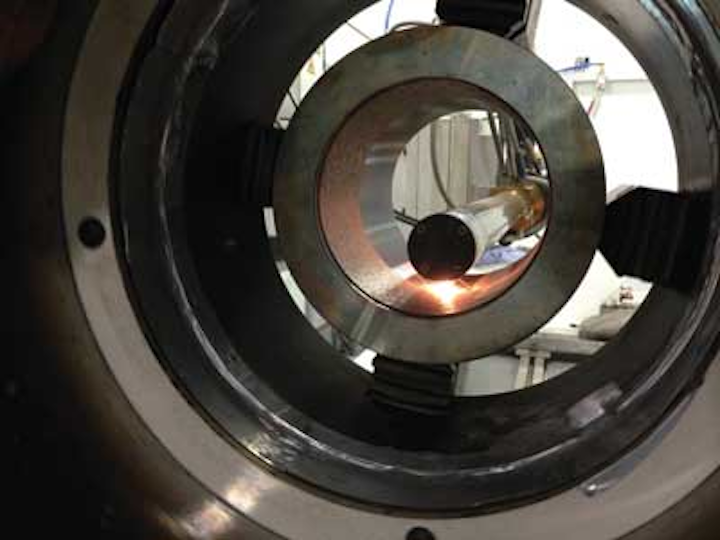 Anti-wear coatings specialist Technogénia serves a range of industries, with the drilling sector accounting for nearly two-thirds of its $36-million turnover.Guy Maybon founded the company in 1979, initially focusing on fused tungsten carbide production using high-temperature induction furnace synthesis. In the mid-1980s, Technogénia introduced its patented "cold crucible" induction fusion system that involves spraying a liquid phase of tungsten carbide. The resultant carbide grains, known as Spherotène, are spherical particles ranging in size from 40-2,000 microns, claimed to provide hardness of up to 3,000 HV. The absence of oxidation in the process leads to improved weldability of the derived products, the company adds, and improved resistance to shocks compared with deposits made from crushed or jagged particles. Other claimed advantages include compactness, with a minimal mean free path between the spheres in the weld deposit (leading to minimized erosion of the softer matrix) and a low level of cracking.

During the late '80s and early '90s the company introduced the Technocasting process that provides tungsten carbide wear protection for components with complex shapes, and started research into carbide deposition using laser technology. This culminated a decade later in the Lasercarb process, which deploys a continuous 4-kW diode laser to melt the deposition powder (NiCr or another material) on the machined component, forming a strong metallurgical bond between the deposits and the base metal. The deposits are said to be dense, precise and easily reproducible, with a high level of abrasion resistance.

One of the company's more recent innovations is an internal cladding process, designed to provide improved abrasion resistance, and which won GEP's Prix de l'Innovation in 2008. According to sales strategy manager Hervé Maybon, "a kind of arm goes inside a tube and does the hard facing job internally. This is particularly suited to the radial bearings used for downhole motors employed in offshore horizontal drilling."

Maybon continued: "We are also working on an alternative nickel/steel/cobalt matrix for our deposition process to improve resistance to shocks, erosion, and abrasion. Additionally, we are looking to improve the quality of our spherical tungsten carbide particles in terms of the resultant hardness. And following requests from our customers, we are thinking of adding diamond particles to the tungsten carbide for certain applications."