Heerema Marine Contractors has announced that it will retire at the end of the year its semisubmersible crane vessel Hermod. 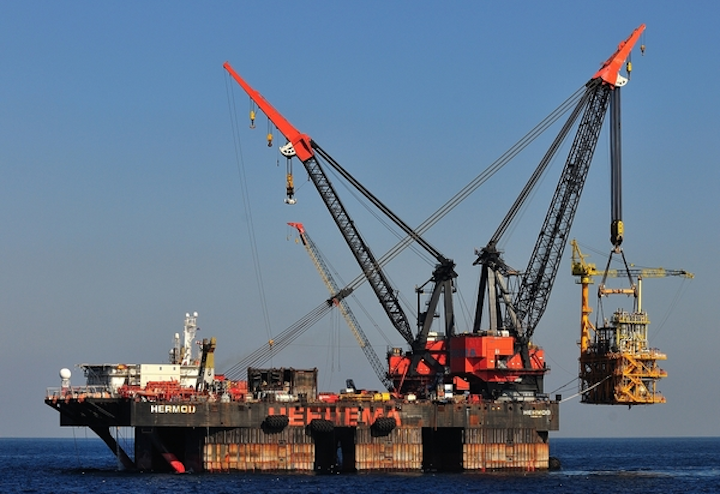 LEIDEN, the Netherlands– Heerema Marine Contractors has announced that it will retire at the end of the year its semisubmersible crane vessel Hermod.

Designed and constructed in the 70s, theHermod and her sister vessel Balder were the first semisubmersible crane vessels of its kind in the offshore construction industry. The semisubmersible concept was developed with the aim to extend the operability in the harsh North Sea environment and to deliver superior lifting capacity. This, the company says, allowed it to work faster and during more months of the year than the conventional mono-hull crane vessels of the time.

After delivery by the Japanese Mitsui yard in 1978, theHermod’s first job was the installation of the Piper A platform on the United Kingdom continental shelf. She executed her first project outside the North Sea in Brazil in the mid-eighties, followed by projects in the Gulf of Mexico, Southeast Asia, and Africa.

HMC pointed out that throughout her career, theHermod worked in more than 25 countries and was involved in several “first-of” installation projects including:

The heaviest lift performed by theHermod was the Peregrino topsides in Brazil in 2010 with a dry weight of 6,287 mT.

HMC said that the demolition of theHermod will be performed in a safe and responsible way, in accordance with the Hong Kong International Convention for the Safe and Environmentally Sound Recycling of Ships and in line with the European Union Ship Recycling Regulation.

The company has contractedDockwise to transport the vessel to the Zhoushan Changhong International Ship Recycling yard for dismantling and recycling. The Hermod will be loaded onto the Dockwise Vanguard in the port of Rotterdam, the Netherlands, and will be transported to Zhoushan, China.