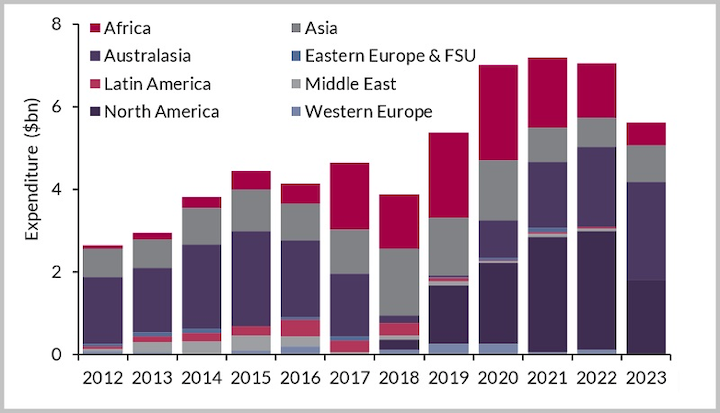 The sanctioning ofEni’s Coral South FLNG unit signaled the second wave of liquefaction vessels expected to be ordered over the forecast period. The start-up of pioneering projects, and the deployment of the first converted LNG carrier to an FLNG unit, will serve as a proof-of-concept, supporting future investments.

Given the strong fundamental drivers – increasing gas consumption due to economic growth, fuel switching, and energy security – the outlook for the import vessels will remain strong over the 2018-2023 period. Despite near-term concerns due to challenging market conditions, the analyst says, the incentive to useFLNG units to develop gas reserves in remote places remains compelling.

However, Westwood says that a downside risk to the forecast remains, as operators continue to evaluate various alternative development options, including the use of existing onshore infrastructure, which may provide a more economically viable development option or concepts influenced by local political interventions.

According to the “World FLNG Market Forecast 2018-2023,”North America will account for the largest share of the market at 29%, with expenditure amounting to $11.1 billion over the forecast.

Liquefaction vessels are expected to account for 70% of global FLNG expenditure over the forecast, with import facilities representing the remaining 30% of the market.

With 28 import vessels currently in operation, Westwood expects an additional 47 import vessels to be commissioned over the forecast period, with expenditure on import vessels amounting to $11.2 billion. This represents an increase of 68% compared to the 2012-2017 period.