Frontiers are often a state of mind - even an older, well-explored basin is a frontier to a fresh set of geo-eyes. 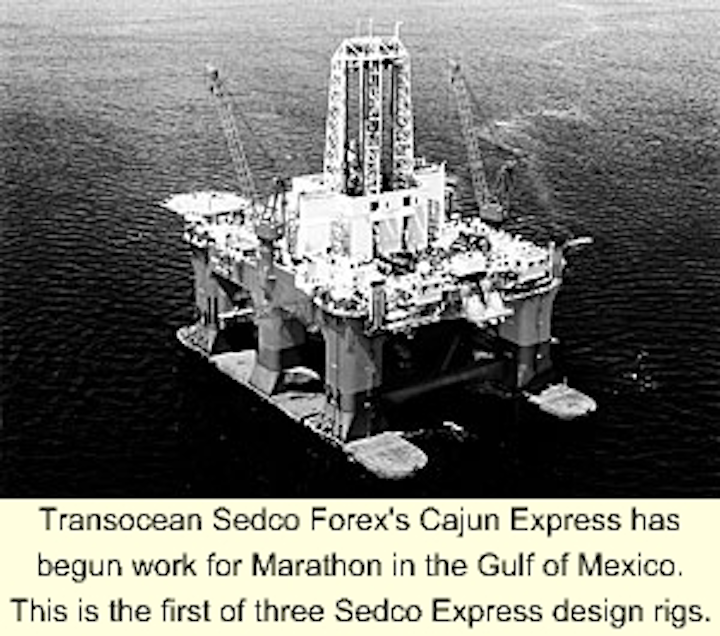 Transocean Sedco Forex (TSF) has amended its contract with Elf Angola over the newbuild Sedco Express semisubmersible. The amendment relates to the date for possible early termination of the contract due to late delivery of the rig and total expected revenues over the duration of the contract. The companies have moved the date for termination back from May 28 to December 28, in exchange for a reduction in TSF's expected revenues over the three-year contract in the rig by $23 million, to an estimated $165 million.

But in a new twist, the contract allows for TSF to recover some of this lost revenue during operation through performance goals. Under the new deal, TSF can recover a maximum of $3.7 million of the revenue reduction during the initial six months of the rigs operation through the achievement of minimum monthly performance goals. In addition, the company can earn additional revenues during the term of the contract through a performance-based system.

The new Sedco Express design is touted by TSF as one of the most efficient rigs in the world, reducing total well construction time by 25% and total well construction cost by 30%. This new contract with performance goals is a way of saying "put your money where your mouth is." It may be difficult to meet these goals with a brand new design coming straight out of the shipyard, but the opportunity to make some of the money back is an offer that TSF can't refuse. Not to mention, it gives the company a chance to prove their design with much more at stake.

TSF expects to deliver the Sedco Express on or around the middle of the year. The rig currently is undergoing thruster installation off the coast of Brest, France and has begun its final commissioning and equipment testing. The rig is rated for 7,500 ft water depths and will work off Angola.

On a happier note, the first of the Sedco Express rigs, the Cajun Express has been completed and delivered to Marathon Oil in March for a contract in the Gulf of Mexico. The rig was completed at Singapore's Promet Private Ltd shipyard. Further, TSF made two positive moves with BP Amoco. The company received a letter of commitment from BP Amoco for the Discoverer 534 drillship for two firm wells and one optional well in the Gulf of Mexico beginning this month. The rig is expected to work 180-220 days with revenues of $26 million.

In a separate deal TSF agreed to cancel the remaining 14 months of a contract with BP Amoco for the Transocean Amirante semisubmersible for $25 million in cash.

R&B Falcon's new Deepwater Nautilus semisubmersible has left the Hyundai Heavy Industries (HHI) Shipyard in Ulsan, South Korea and should arrive in the Gulf of Mexico to begin work this month. The Deepwater Nautilus is a fifth-generation moored ultra-deepwater semisubmersible. The rig measures 114 meters in length by 78 meters in width by 106 meters high. It is rated for 8,000 ft water depth operation and 30,000 ft drilling depth.

The rig was constructed by Hyundai using a unique new technique in which it was built on the ground, rather than in a drydock and mated onshore. Each structure of the vessel was built separately and then lifted using HHI's "super-lifting" technique and mated together onshore.

BV NMA Maritime and Offshore Contractors of Rotterdam have signed on for exclusive marketing and management of Cosco's two new semisubmersible heavy lift vessels. The new vessels will be DP class 2 and represent the only semisubmersible heavy-lift vessels to be equipped with dynamic positioning. The vessels will be optimized to perform cable laying, pipelaying, and work vessel operations.

The vessels are under construction at the Guangzhou Shipyard in China and should be delivered in October 2001. Although they will be managed and marketed by NMA, the vessels will remain a part of Cosco's fleet. NMA currently manages an international fleet of 13 vessels, including eight heavy-lift vessels ranging from 180 metric tons up to 500 metric tons, two Ro-Ro vessels, and two dock vessels.

Tidewater, the owner and operator of the world's largest fleet of support vessels, has decided to add to its present fleet of 625 vessels. The company is undertaking a $4.3 billion newbuild program. William O'Malley, Chairman of the company said that the new vessels will be "directed to the highest end of the market and cover operational capabilities the company does not presently possess." Tidewater said the newbuilds will include very large anchor handling towing supply vessels and large platform supply vessels, capable of working anywhere in the world. Delivery of the new vessels is expected to begin in about two years

Harvey Gulf International Marine has signed a contract with a Florida shipyard to build two towing vessels for its offshore rig moving division. The new ships will measure 150 ft by 47 ft by 20 ft. Each will be powered by two EMD 20-710G7B turbo units with a 1,000 hp bow thruster. Also, the tugs will have 155 tons maximum continuous certified bollard pull. The company also is in negotiations with a Louisiana shipyard to begin constructing a third vessel immediately.

Marine Shuttle Operations has signed a memorandum of understanding with the Italian Ministry of Industry and various other Italian governmental entities to finance the first Offshore Shuttle. The Offshore Shuttle will be equipped to perform decommissioning, installation, and transportation of offshore oil and gas structures without extensive cutting or dismantling. The financing will be in the form of equity, debt, and government guarantees and subject to numerous material conditions.