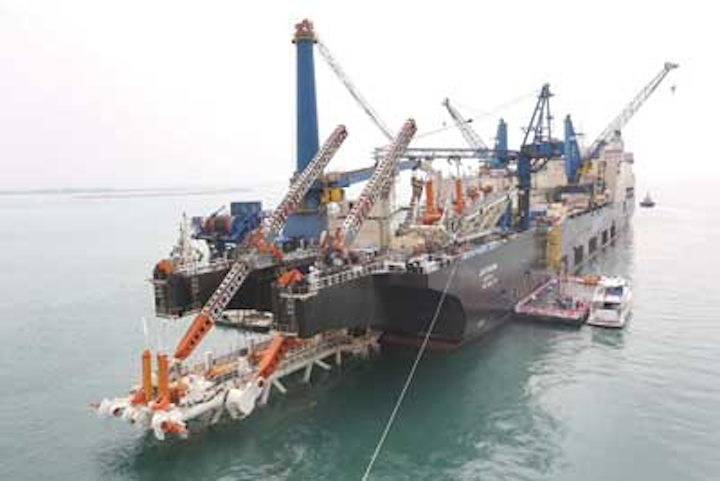 Vessel starts work on Walker Ridge in Gulf of Mexico

With all these issues in mind, Saipem has engineered and constructed its latest flagship vesselCastorone, which can perform S-lay in shallow waters and steep S-lay in deepwaters (more than 2,000 m/6,562 ft), switching to J-lay mode for ultra-deepwaters (up to and more than 3,000 m/9,842 ft) or where the project requirements limit pipe bending and longitudinal stresses. This versatility has been achieved through numerous distinctive features such as a DP-3 dynamic positioning system designed for pipelay; a high bollard pull to counteract pipe bottom tension; and a ramp system with pipe roller supports that is fully remote-controlled without having to abandon the pipe, and capable of attaining a near-vertical ramp exit angle.

The vessel is classified Ice Class AO (IA Baltic), allowing it to handle S-lay of trunklines even in arctic conditions. Its transit speed is 13 knots, and its storage capacity is around 20,000 metric tons (22,046 tons), with the possibility to upgrade to unmanned loading and offloading of pipe joints.

The stinger is designed to handle any pipe diameter and water depth through continuous control of overbend stresses in the pipe. The stinger comprises three articulated, adjustable sections allowing a change of configuration from shallow to ultra-deepwater without abandoning the pipe - another unique feature. Up to seven triple joint work stations may be used to assure a high production rate. Pull capacity is 750 metric tons (827 tons), with a maximum holding capacity for flooded mode of 1,500 metric tons (1,653 tons).

The vessel's design allows for the future installation of a fixed tower for double-station, triple-joint J-lay in ultra-deepwater. A fast switchover from S-lay to J-lay will be possible offshore and while serving the same project to best accommodate the route and water depth needs.

In J-lay mode the pipe is laid through a vertical ramp, positioned to allow a more natural laying configuration. As a result, a lower lay tension is required, leading to reduced on-bottom tension. In addition, J-lay is less impacted by weather, and pipe stresses are maintained well within the linear elastic limit.

The J-lay tower will be installed over a moonpool close to the center of the vessel and is part-foldable, allowing passage under bridges with a maximum height of 67 m (220 ft), ensuring access through restricted areas such as the Bosporus Strait connection to the Black Sea. The system can handle J-lay of triple joints 36.6 m (120 ft) long, which are supplied directly by the onboard prefabrication line. Two working stations allow parallel welding and field joint coating.

The J-lay tower is designed to operate with a fixed vertical angle that allows full weathervaning of the vessel while traversing oceans or harsh environment areas. This improves the vessel's station keeping, limiting weather standby periods, and therefore allowing high production rates to be sustained.

Into the firing line

At the portside and starboard, two gantry cranes lift line pipe brought from supply vessels in DP mode or from cargo barges or vessels moored alongside. Pipe is received from deck loaders and then transferred up the vertical elevator to internal holds capable of storing more than 20,000 metric tons (22,046 tons) of pipe. The pipe jointing system is fully automated and can operate with the minimum man-machine interface, which enhances safety. The system can handle both 12-m (39-ft) and 18-m (59-ft) long single joints, with a separate line dedicated to handling 36-m (118-ft) long triple joints previously assembled onshore.

Once the pipe has reached the prefabrication area, it is moved to two triple joint plants either side of the firing line. Here three 12.2-m (40-ft) long single pipes are beveled and welded together, forming initially a double and then a triple joint. Following welding, the joints undergo a non-destructive test (NDT) check followed by field joint coating. The full 36-m long pipe string is then conveyed to the S-lay or J-lay firing lines via elevators. There are two identical fabrication plants portside and starboard. The production rate guarantees output of more than 1.5 times the lay-cycle.

The main firing line, around 250 m (820 ft) long, is in the center of the vessel. This is the first S-lay vessel to weld 36-m joints along the firing line after subsequent move-ups of 36 m. It can accommodate up to seven work stations for higher productivity; only six work stations are deployed along deepwater sections, however, where a steep ramp configuration is necessary, close to vertical departure angle.

There are two main sections in the firing line. The first, situated upwards of the second tensioner on the bow side, has three work stations for welding and first and second tensioners. It is straight and horizontal up to the stern side of the second tensioner. This section includes five track-equipped pipeline supports ensuring constant alignment between the line-up tables and the first tensioner and two adjustable roller supports.

The second section extends downward of the stern side of the second tensioner up to the stinger. It encompasses four work stations for NDT control, weld repairs, and field joint coating. Five adjustable supports, designed for 100-metric ton (120-ton) static and 150-metric ton (165-ton) dynamic, guarantee the selected curvature to the pipeline. Three 250-metric ton (275-ton) tensioners and a 750-metric ton (827-ton) A&R winch are provided on the launch ramp.

The ramp system, designed by Saipem, provides a suitable configuration and the vertical and lateral support needed for the pipeline. The optimum lay configuration can be easily determined as a function of changing depths, pipe thickness, and weights via an accurate adjustment of the ramp angle and roller height. All maneuvers can be performed with pipe laid on supports. Basically, the ramp system comprises three main elements with a respective length of 40 m, 42 m, and 39 m (131 ft, 138 ft, and 128 ft), all connected rigidly via hinges. The steep radius of curvature that can be achieved allows pipelay in ultra-deepwater in a shape close to vertical and therefore comparable with J-lay.

For S-lay, the ramp system comprises three sections independently settable with a series of rollers on each section, allowing a specified curvature and exit angle to be imparted to the pipe. Saipem has additionally developed an algorithm to optimize the sequence of steps to be performed for passing from one ramp configuration to another, which will improve pipe safety and pipelay productivity.

Triple joints leaving the twin pre-fabrication lines are alternately loaded onto the S-lay firing line before being transferred to the string elevator feeding the J-lay tower via a combination of conveyors and elevators. The tower is designed to accommodate two work stations, the upper of which is equipped for welding and NDT tasks, while the lower station is equipped for NDT and field joint coating, configured in line with the client's requirements.

The J-lay tower flute extends 20 m (66 ft) just below the tower. It is installed inside the moonpool, beneath the safety clamp of the hang-off clamp. The flute comprises four roller levels coated with polyurethane to sustain and lay the pipe, two steel roller levels for the A/R cable, and a safety steel ring at the bottom to avoid excessive deflection of the cable.

Castorone's DP system is compliant with fully redundant Norwegian Maritime Directorate Class 3 and ABS rules. The vessel's redundancy and station-keeping allow it to withstand very severe environments for shallow and deepwater pipelay. Saipem has developed a simulation tool to analyze simultaneously the vessel's motion, DP system performance, and the structural behavior of the pipeline during laying. Furthermore, the tool allows simulation of the interaction between pipelay and DP control for safety purposes.

This is an adapted version of an article first printed in Impiantistica Italiana.p