As a concept, floating liquefied natural gas (FLNG) has been around for nearly four decades - long enough for many to question, only a few years ago, whether circumstances would ever push the technology beyond that stage. 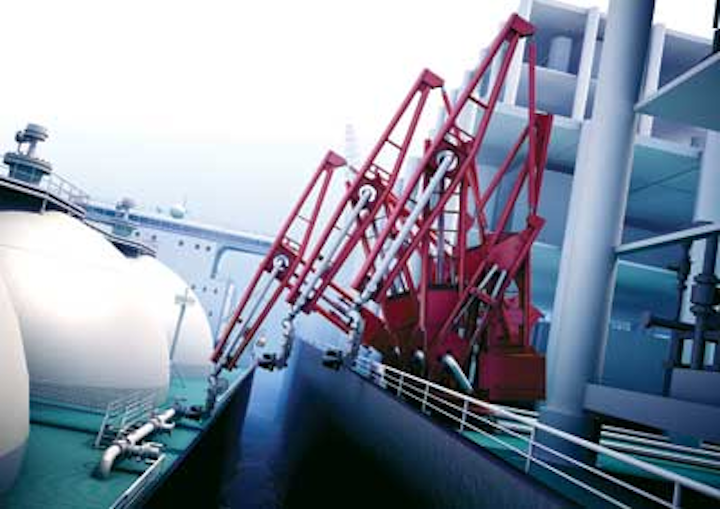 Steel cut on two projects, with more in the works

As a concept, floating liquefied natural gas (FLNG) has been around for nearly four decades - long enough for many to question, only a few years ago, whether circumstances would ever push the technology beyond that stage. Now, with two major projects in the works and many more under consideration, FLNG's place in the energy mix of the future seems assured.

A number of factors have helped launch the technology, most notably a healthy and growing demand for LNG. Production techniques have made remote, "stranded" gas fields economically viable. And engineers have successfully addressed the three major FLNG hurdles: containment, loading at sea, and replicating onshore liquefaction plants on a floating vessel, where space is limited and finding the correct safe design and center of gravity are crucial.

Space and safety were critical challenges in the effort to take LNG production offshore, says Victor Alessandrini, FLNG business development manager for Technip. "Onshore, you do not have a lot of issues, because you have lots of space. But in offshore configurations, things are very confined, very congested. What I always say is, onshore, you can use a 2D approach, but offshore it's a 3D approach. And much more complex, compared to onshore LNG plants."

Technip was enlisted to conduct design, engineering, procurement, construction, and installation for the two FLNG projects that have been sanctioned: Shell's Prelude development offshore Western Australia, in a consortium with Samsung Heavy Industries (SHI), and the Petronas-operated FLNG facility at the Kanowit field offshore Malaysia, in which Technip has teamed with Daewoo Shipbuilding & Marine Engineering (DSME) for the EPCI effort. Several FLNG projects have entered the front-end engineering and design or pre-FEED queue, including ExxonMobil's Scarborough project, Woodside Petroleum's Browse development, and Inpex's Abadi project off Indonesia, among others. A design competition is under way for a Petrobras-operated FLNG unit offshore Brazil with a capacity of 2.7 MM tons/yr of LNG.

"There are other projects ongoing with pre-FEED that will be sanctioned before Prelude and Petronas are operating," notes Alessandrini. "So I think that companies are not necessarily waiting for these two projects to be completed before moving forward."

Shell cut first steel on the Prelude substructure in October 2012, and started work on the topsides the following January. The vessel will be 488 m (1,600 ft) long, 74 m (240 ft) wide, and carry enough topsides equipment to process 3.6 MM tons of LNG, 1.3 MM tons of condensate, and 0.4 MM tons of LPG per year. Even considering the floater's massive proportions, Alessandrini says, fitting such a large liquefaction plant into a limited footprint - and on a vessel moored in a region subject to swells and typhoons - has been "a learning experience" that offshore teams have been able to achieve through the development cycle of technology.

"We have been building LNG plants for 40 or 50 years, but there was always available space," he says. "Now, we have to put all this equipment in a confined space, and how you do that determines the success of the project. You do it with a combination of LNG technology and an understanding of the offshore environment."

Loading LNG onto carriers from a floating structure, likewise, is considerably more complicated than traditional loading from near-shore, fixed jetties. The operation must be carried out between two vessels in motion; moreover, in cases like Prelude, the drop from the deck of the FLNG unit, where the loading arms are installed, to the intake manifolds on traditional LNG carriers can be 10 m (33 ft) or greater.

To address the "gap" between deck levels, FMC Technologies developed a new loading arm that builds on the company's existing Chiksan marine loading technology but eliminates the base riser that supports the articulated assembly. Instead, the arm is mounted on a turntable at deck level, allowing the length of the arm to be reduced by one-fifth while giving it the range of motion needed to reach the deck of the carrier below. A control system analyzes and anticipates the dynamic motion between the vessels to prevent undue stress on the carrier's manifolds. FMC has dubbed the new system OLAF, for Offshore Loading Arm Footless.

"You cannot create too many mechanical efforts on conventional carrier manifolds," explains Laurent Poidevin, president and general manager of FMC Technologies SA, the company's Sens, France-based division, where the loading arms for Prelude are being manufactured. "Manifolds cannot accept many mechanical loads. We have to make sure that the system that we connect on those manifolds will be absolutely self-supported and free-balanced."

The loading arms for Prelude are scheduled to be delivered to SHI's shipyard in Korea in early 2014.

When Shell sanctioned Prelude in 2011, the company made it clear that the project was not a one-off but rather something that would be replicated for other FLNG projects. The first sister vessels could be put to work at the Woodside-operated Browse project, where Shell last year increased its equity stake with the acquisition of Chevron's interest in several blocks offshore Western Australia. The partners have discussed a two-stage development program that could eventually include three FLNG units serving the Brecknock, Calliance, and Torosa fields. Woodside this year ditched plans for an onshore LNG processing plant at James Price Point in favor of what the company has said is a more economically feasible FLNG solution.

"It is less costly to have an offshore liquefaction plant that an onshore plant," Poidevin says. "The permitting process is probably easier. And building LNG tanks onshore is something that takes a lot of time, maybe three to four years of work. Offshore, storage installation is like what we have on LNG carriers, so this is something common, and easier to manufacture."

Liquid transfer will continue to be a challenge, however, as projects move into increasingly harsh environments. LNG carriers will be moored parallel to the Prelude vessel during loading operations, but that configuration will not be an option in seas where wave heights exceed 4.5 m (15 ft), Poidevin says. In those conditions, a tandem, or bow-to-stern configuration will be necessary for loading, with a space of 70-115 m (230-377 ft) between the vessels. FMC Technologies has developed and qualified a tandem loading system called the Articulated Tandem Offshore Loader, or ATOL. Scarborough, in 900-m (2,953-ft) water depths in the Carnarvon basin, will probably require such a system, he notes.