Teekay's new Samba class of shuttle tankers is due to come into operation soon for BG Group in Brazilian waters. 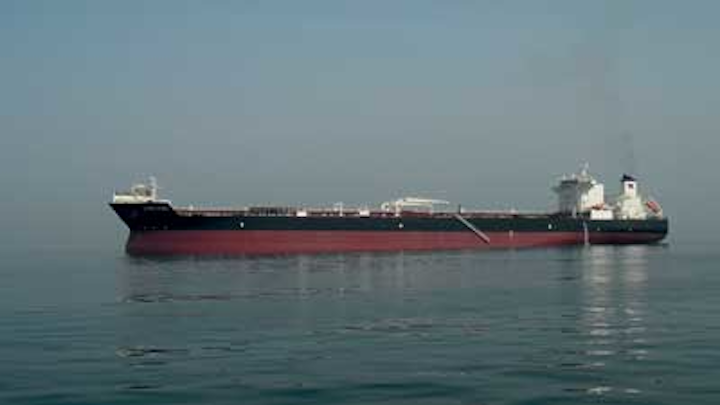 Teekay's new Samba class of shuttle tankers is due to come into operation soon for BG Group in Brazilian waters. Four vessels have been ordered, the first specially designed for this sector and, in Teekay's view, the most efficient and eco-friendly to date.

The first of the four units,Samba Spirit, was due to start sea trials in late April, after which it was expected to sail to Brazil and begin operations for BG around mid-year. Lambada Spirit is expected to arrive during 3Q followed by Bossa Nova Spirit and Sertanejo Spirit toward the end of the year.

Teekay has had a presence in Brazil since 2002, operating fleets of shuttle tankers and FPSOs, said Alex Tischendorf, managing director of Teekay do Brasil. However, the Samba class vessels bring another dimension to its activities. The vessels represent its first shuttle tanker contract with an international oil company and its first newbuilds for this sector. Current operations in Brazil involve either vessels previously used in the North Sea or converted tankers, and are all exclusively for Petrobras.

The Samba project dates back to early 2011, when BG invited proposals for four shuttle tankers to ship oil from its Brazilian fields – the company is a partner in the Petrobras-operated presalt fields in the Santos basin. The enquiry incorporated BG's own basis of design, with functional specifications and some very strict requirements, said Johan Eidem, manager for Teekay's shuttle tanker projects. Further demands, including Petrobras' shuttle tanker technical requirements and the Teekay Offshore loading system specification, also formed part of the mix from which the specs for the newbuilds were distilled. The design was developed in the company's Stavanger office, the center for its shuttle tanker business.

Teekay signed a time-charter contract with BG in June 2011, committing the vessels for 10 years with options. At the same time the company, which had been working with several yards on the project, signed a shipbuilding contract with South Korean yard Samsung. ABS was selected as the classification society after a competitive bidding process.

The 282-m (925-ft) long vessels are Suezmax size, with 1 MMbbl storage capacity, and equipped with DP-2 station-keeping capability. The DP system is said to be highly robust, with 11 MW of thruster capacity spread between two azimuth thrusters and one tunnel thruster forward and one of each type aft, in addition to powerful auxiliary generators, and an integrated control and monitoring system.

Such a powerful system is required to meet the operational mode off Brazil. Unlike the North Sea, where FPSOs weathervane around an internal turret with the shuttle tanker following, offshore Brazil most FPSOs are spread-moored in a fixed position. While loading, the shuttle tanker must therefore maintain a fixed position relative to the FPSO, in the face of waves, wind and, in particular, currents that can be strong and variable.

The design embodies more class notations than usual, which reflect the scope of BG's requirements. These include ENVIRO+, which denotes a high level of environmentally-friendly performance, including a green passport. Several applicable features include a ballast water treatment system, a first for Teekay newbuilds, and a fixed inert gas system for the ballast tanks.

Another feature is the VOC (volatile organic compounds) mitigation system for minimizing emissions during loading. The same system is included in Teekay's Explorer class shuttle tanker, also built by Samsung, of which three are working for Statoil in the North Sea. Efficient fuel consumption is another element of the ENVIRO+ notation.

The Samba class design has a novel hull form, with unusual features around the stern and propellers. "The hull form gives us the best fuel consumption of any of our designs," Eidem claimed. The vessels are equipped with two-stroke MAN engines, said to deliver strong performance both in transit and DP mode. A specialized paint is used on the rudder to minimize friction with the surrounding water.

The bow loading system has 8,000 cu m/hr (282,517 cu ft/hr) capacity. The loading and discharging system is versatile, including a single-point mooring system in the bow to comply with BG's request for loading from a mono-buoy. Discharge is also possible through the bow loading system. This enables transshipment of cargoes at sea in DP mode, making it the first shuttle tanker with a qualified design with this capability.

The new vessels will lift BG's share of crude from its deepwater presalt discoveries in the Santos basin, which should eventually make the company the second largest producer in Brazil. These reserves are being developed with a large number of FPSOs – 15 units are planned in the first phase of development alone, according to BG, which in turn implies an increased need for shuttle tankers.

The Samba class development could therefore provide a solid base for further expansion of Teekay's shuttle tanker operations in Brazil. The company currently has 10 units operating in the sector, but by year-end the arrival of the Samba class vessels will take the number to 14.

Although the coming ramp-up in Brazil's offshore oil production has not taken place as quickly as expected, by around 2015/2016 additional capacity is likely to be needed, Tischendorf said. Teekay plans to respond to future requirements, whether from BG, Petrobras, or other players.