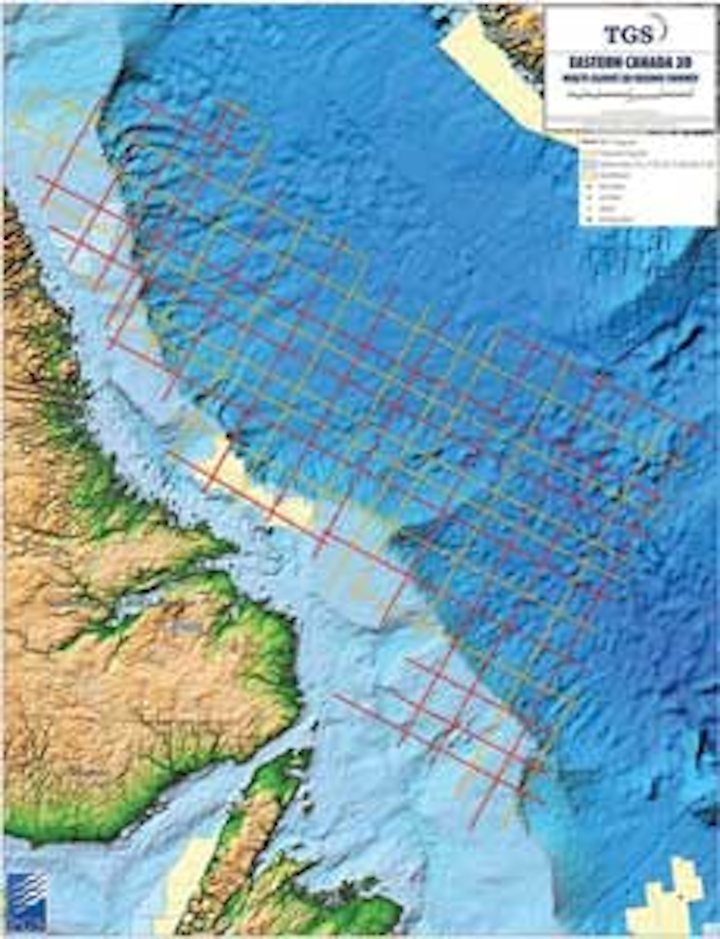 TGS has signed an agreement with Colombia's Agencia de Hidrocarburos (ANH) to acquire a new 10,000-km (6,214-mi) proprietary 2D survey offshore Colombia. Approximately 6,400 km (3,977 mi) of data will be acquired in the Caribbean and 3,600 km (2,237 mi) in the Pacific. The seismic data will be acquired by the M/V Shatskiy starting in early 4Q 2012 and will provide a new regional view of the deepwater geology of Colombia. The proprietary contract with ANH also includes TGS processing and interpretation services of the 2D data.

Europa Oil & Gas has provided an update on its licensing options LO 11/07 and LO 11/08 in the South Porcupine basin offshore western Ireland. Reprocessing is under way of key seismic lines over both prospects and will be followed by a rock physics and 2D inversion study to calibrate the seismic response. Earlier seismic mapping shows potential for large stratigraphic closures of up to 120 sq. km (46 sq. mi) for Mullen and 244 sq. km (94 sq. mi) for Kiernan. The two prospects are supported by amplitude anomalies on 2D seismic data. Other studies indicate potential for an additional lower Cretaceous source rock as well as the proven Jurassic source rock. These license areas cover a total area of around 2,000 sq. km (772 sq. mi), in water depths of 700-2,000 m (2,296-6,561 ft.). Both were awarded under the 2011 Irish Atlantic Margin licensing round. Europa has identified two large prospects, Mullen in LO 11/07, 200 km (124 mi) off southwest Ireland; and Kiernan in 1,780 m (5,840 ft.) of water in LO 11/08, 145 km (90 mi) from the southwest coast. Both are in the lower Cretaceous clastic play, which also generated the undeveloped Burren oil discovery. Europa also continues discussions with potential farm-in partners.

Schlumberger has added high-definition spectroscopy to its Scanner Family rock and fluid characterization services. The Litho Scanner service measures an enhanced suite of elements, including carbon, magnesium, and aluminum, in real time to help provide a detailed description of complex reservoirs, including unconventional, shaly sand and carbonate. In addition, this latest wireline service provides a stand-alone quantitative determination of total organic carbon (TOC), critical for the evaluation of shale reservoirs.

CGGVeritas has agreed to acquire Fugro's Geoscience Division, excluding the existing multi-client library and nodes businesses. CGGVeritas says this will make it a fully integrated geoscience company with a leading position in the high-end integrated geology and geophysics and reservoir market. The transaction will also strengthen and extend its existing equipment and acquisition businesses, in particular with the addition of four high-end 3D vessels. The agreement also includes strategic partnerships which will benefit from the leading positions both parties have in their respective markets:

DNV has developed a new class notation for seismic vessels in consultation with key industry players such as WesternGeco, PGS, and Fugro-Geoteam. The need to have enhanced redundancy and proper deck arrangements to ensure continuous operation without loss of speed is the backbone of these new technical requirements.

Any interruptions in the ship's forward movement can complicate the seismic data processing, and continuous operations to avoid any downtime of key functions are of the utmost importance. With expensive seismic streamer equipment mobilized at sea, sudden loss of service speed may lead to severe consequences, since damage to cables can impair the whole seismic vessel operation.

The new notation focuses on increased availability of the vessels during critical phases of the seismic operations. As well as vessel operators, DNV has consulted seismic handling and high-pressure equipment suppliers to ensure that all current and future industry challenges are comprehensively addressed.

The maintenance of propulsive power is a key issue. The class notation has therefore taken the DNV concept for redundant propulsion one step further so that any failure on board will not lead to loss of more than 50% forward thrust. This is sufficient to maintain a minimum speed of a few knots and will protect any high cost air guns and streamers deployed.

Seismic vessels typically operate for many months continuously without seeking harbor. The class notation requires a deck arrangement that facilitates side-by-side transfer for crew and resupply from a seismic support vessel.

Beyond this, the class notation also sets a requirement for the bridge arrangement to ensure good view to the streamers and any workboats that are in the area during normal operation. High pressure systems are also addressed in the class notation to ensure that deck operations can be carried out safely by the crew.