Fincantieri Offshore is working on an alternative concept for a ship-shaped compressed natural gas carrier that could economically transport gas from stranded fields, compressed onboard to a pressure of 166 bar (2,407 psi), to a standard onshore unloading station or an existing regasification plant up to 1,500 mi (2,414 km) away. 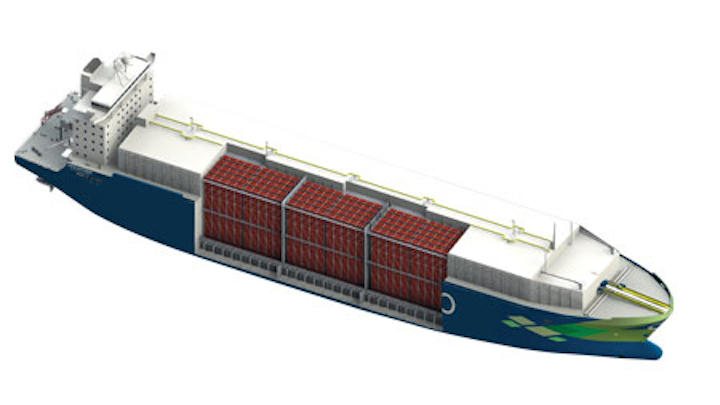 Floating LNG vessels are emerging as a solution for harnessing gas from mid-size fields remote from offshore infrastructure. But there are many smaller offshore fields that do not justify the huge vessels that Shell and Petronas have commissioned for their current projects off Australia and Malaysia.

Fincantieri Offshore is working on an alternative concept for a ship-shaped compressed natural gas carrier - theCNG32000- that could economically transport gas from stranded fields, compressed onboard to a pressure of 166 bar (2,407 psi), to a standard onshore unloading station or an existing regasification plant up to 1,500 mi (2,414 km) away.

Aside from providing a market for gas that might otherwise sit in the ground, the concept opens other potential benefits to offshore operators. One is avoiding the expense of installing a gas pipeline in the case of an oil field with associated gas, or having to re-inject the gas into the reservoir. Another is an economic means of disposing of gas from extended offshore well tests, ensuring compliance with restrictions on flaring.

There are numerous competing compressed natural gas (CNG) concepts, but according to Roberto Gonan, Head of Basic Design at Fincantieri Offshore, none are sufficiently matured to be considered for industrial production and vessel applications.

Next to the cargo holds, the mid-body portion of the ship features a double hull and a double bottom, the inner part of which is used for ballast water tanks. Toward the aft section is the accommodation block, housing 21 crew members, in a superstructure above the main deck containing the engine room. Two 4.5-MW Azipod propulsion units combined with a bow thruster maintain the ship’s position during offshore tandem loading operations. Power is provided by three diesel generators with dual-fuel engines, each outputting around 4.3 MW. A back-up generator is stationed beside the accommodation block above the main deck.

The fore part of the vessel has a bulbous bow. Here the CNG handling system and compressor are located, above the main deck and forward of the cargo holds.

“At present we are working on various issues. These include refining the thermo-fluid dynamic study, and assessing the ship’s different working conditions (loading/unloading/emergency release and so on). In addition, we are fine-tuning the prototype gas rack with the potential supplier of the pressure vessels, and we are finalizing safety aspects such as the FMEA analysis.”

The compression system has been designed to allow the ship to receive gas at various pressures and store it in metallic pressure vessels. The main components are the compressors, similar to those used in re-liquefaction systems in LNG carriers; thermal expansion valves; coolers; heaters; and remote control valves.

“Recent market studies for high-pressure vessels mostly foresee the application of materials not yet tested for CNG being transported at 250 bar and also envisage very high material costs. The solution we are proposing is intended to achieve the best compromise between the size of the vessel and the quantity of gas transported, at the same time eliminating upstream any possible issue relevant to time-to-market and proven technology. Our design is ready to build, and we want to use the highest quality standard components available today for the compression/storage system, in terms of pressure vessels, valves, pipes and so on.”

Gonan stressed that this is not a “one size fits all” concept. “Each project would need to be approached on a case-by-case basis. In addition, it is more practical to think in terms of a fleet of CNG vessels, rather than a single carrier, in order to maximize efficiency.”

Prior to entering the ship for compression, the produced gas would need to be pre-processed. Any hydrogen sulfide would have to be eliminated for safety reasons and any carbon dioxide would have to be kept below a certain percentage in order to guarantee the calorific properties of the gas and the heaviest hydrocarbons separated while under pressure.

“The compression system we have designed includes scrubber equipment dedicated to cleaning the gas of heavier hydrocarbons and liquid phases,” Gonan said. “Depending on the amount and characteristics of these quantities, the design of the pre-processing system will require different sizing, equipment, and configuration complexity.”

Arrangements for loading/unloading are provided in the forward part of the ship, comprising two manifolds with longitudinal bow connections suitable for offshore tandem loading. A hawser would be deployed to secure the ship and flexible hoses during cargo transfers. Transversal connections - two portside and two starboard - are also arranged forward for cargo transfer at the port quayside reception terminal.

Cargo loading/unloading would typically be completed in less than a day, Gonan estimated. “This assumes the gas would be received from the source (i.e the offshore production platform) at 60 bar, and delivered to the onshore terminal at 60 bar as well.” Offshore tandem loading operations could be performed even in rough seas, he added, although this remains to be validated in tank tests.

Aside from the gas containment system and associated equipment, the shape, layout, and facilities of the ship are similar to those of a standard LNG carrier, Gonan said. In terms of safety, “while LNG is a cryogenic liquid at -162°C [-259.6°F] carried at the ‘boiling point,’ and therefore continuously generating boil-off gas, the CNG is a stable fluid contained inside the pressure vessels at the ambient temperature condition. As for the CNG storage, the 166 bar pressure in our design is in line with, or even below that of the typical maximum used for transportation by road.”

On arrival at the reception terminal, the ship could directly transfer its cargo into the onshore network if the latter is configured to receive the gas within a reasonable timeframe. “In this case very limited facilities would be needed at the reception end,” Gonan suggested, “such as gas metering, odorization, and a Wobbe index correction system. Alternatively, the ship could be used as a storage facility, remaining at the terminal as long as necessary. If this is not possible or not economically viable, onshore storage would have to be considered.”