Ensco has ordered the fourth in a series of ultra-premium, harsh environment jackups from Keppel FELS. 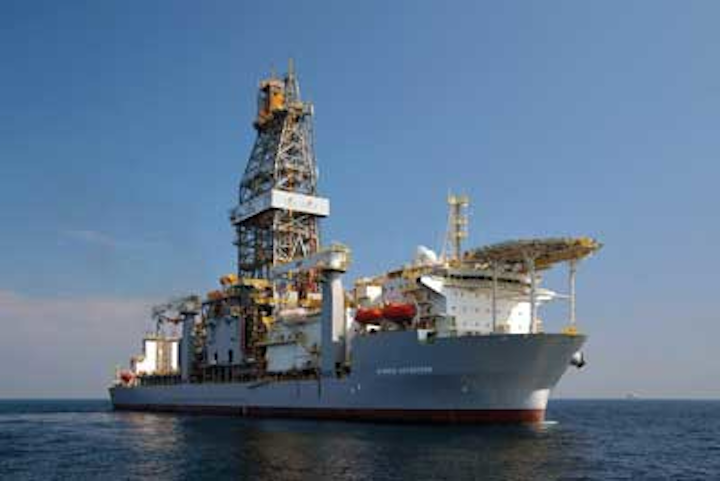 Ensco has ordered the fourth in a series of ultra-premium, harsh environmentjackups from Keppel FELS. The ENSCO 123 is scheduled for delivery in 2Q 2016 at a cost of around $285 million. The first of the KFELS Super A Class rigs, ENSCO 120, was delivered in 2013 and is under contract to Nexen for work in the North Sea. Ensco's contract with Keppel FELS includes an option for one additional rig.

Mitsui, Mitsui O.S.K. Lines (MOL), Marubeni Corp., and MODEC have formed a joint venture to supply the FPSOCidade de Caraguatatuba MV27to Petrobras and its partners in the Carioca area offshore Brazil. The FPSO, chartered for 20 years under an agreement signed in December, will be deployed to the BM-S-9 block in 3Q 2016. The facility is scheduled to have a processing capacity of 100,000 b/d of oil, 177 MMcf/d of gas, and oil storage capacity of 1.6 MMbbl.

Keppel Offshore & Marine has announced a roster of construction projects for 2014 in its Singapore and Nantong, China, shipyards. The contracts are worth a combined $150 million.

The Singapore yard is expected to wrap up refurbishment and life extension work on an FPSO for ONGC's Cluster 7 field offshore India in 3Q 2014. The unit is operated by Armada C7, a joint venture of Bumi Armada Berhad and Shapoorji Pallonji Group. Keppel's work scope includes an upgrade of the living quarters, fabrication and installation of an internal mooring system, and installation and integration of topside process modules. The yard will also perform repair and refurbishment work on the FPSONingaloo Vision, which serves the Apache Corp.-operated Van Gogh field in Australia's Exmouth basin, and will fabricate an external turret for a West Africa-bound FSO for EMAS AMC.

Prosafe has been awarded new contracts for the semisubmersiblesSafe Concordia, Safe Astoria, and Safe Regency. Petrobras has agreed to a three-year, $179-million contract extension for Safe Concordia, which was deployed to the Campos basin Marlin development in 2011 to support the FPSO P-37. The Safe Astoria accommodation vessel will be provided to Swiber Offshore Construction for operations in Indonesia's Natuna Sea offshore gas gathering facilities. The 60-day, $6.9-million contract includes extension options for four additional weeks. Mexico's Cotemar Group signed an $86-million bareboat contract for the Safe Regency. The contract period runs through the end of 2017.

Chevron has entered a $255-million contract with Fred. Olsen Energy subsidiary Dolphin Drilling for theBlackford Dolphin semisub. The contract will begin in early 2Q 2015 and run for a minimum of 572 days. Chevron, which will deploy the rig to the UK North Sea, has an option to extend the contract for 300 to 700 days.