This month Infield Systems looks at offshore capex distribution in Australia up to 2018. 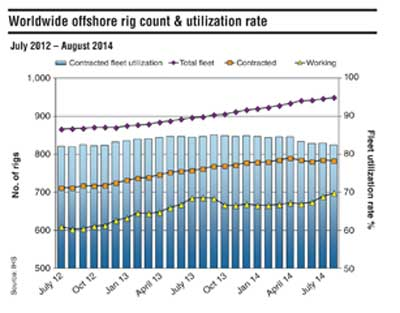 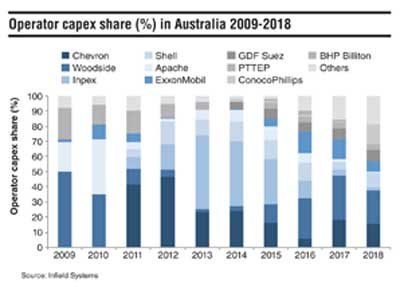 This month Infield Systems looks at offshore capex distribution in Australia up to 2018.

Australia will continue to attract significant offshore investment, with key operators Woodside, Chevron, Inpex, and Shell projected to account for a combined 60% of the country's capex. Woodside-operated developments are expected to require the highest levels of offshore expenditure, with the Browse resources – which will require the use of three FLNG FPSOs – projected to account for almost 39% of the company's Australian offshore investment over the timeframe. Chevron will continue to invest in the Greater Gorgon Area, while its Wheatstone project is anticipated to be the most capital intensive field development that the IOC will develop over the 2014-2018 period. Inpex's Ichthys field, which requires an FPSO and semisubmersible platform, is anticipated to require the largest offshore investment in Australia over the next five years. While Shell's Prelude FLNG project is likely to account for almost 70% of the operator's Australian offshore capex to 2018, with the FLNG FPSO anticipated to be installed toward the end of the timeframe.

The floating platforms market in Australia is projected to see significant levels of investment to 2018, supported by the growth of FLNG – upon which Australia is anticipated to capitalize in order to exploit remote offshore gas reserves – as well as the development of other various floating developments such as the Ichthys, Equus, and Laverda projects. Likewise the pipelines market is also projected to require significant investment during the timeframe, driven by a number of subsea developments which are required where deeper waters prevent the use of fixed platforms and thus require the use of subsea production equipment, and long export pipelines including the Ichthys and Poseidon export lines. With increased levels of offshore activity in Australia the demand for subsea infrastructure, and thus expenditure demand, will undoubtedly increase over the next five years.
– George Griffiths, Senior Energy Researcher, Infield Systems