Despite growing concerns about a possible offshore drilling rig oversupply scenario, owners continue to place shipyard orders to build more jackups, semisubmersibles, drillships, and tender-assisted rigs. Since last year's update, 103 additional rigs have been ordered. By far, the most new orders have been for jackups, which accounted for 77 of the total. Drillships were next with 18 new orders, followed by six semis and two tender-assisted rigs. 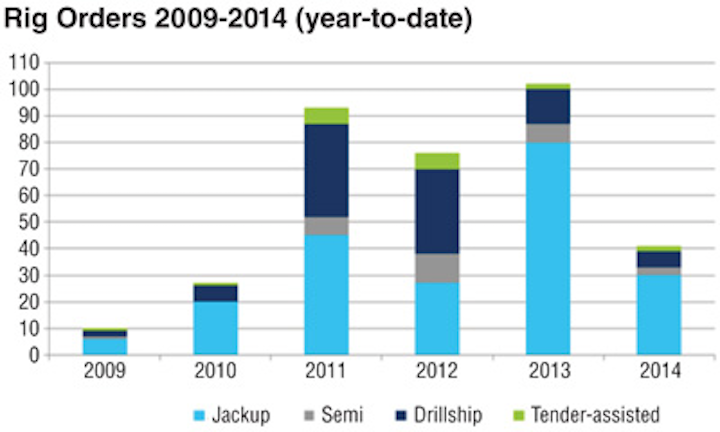 Despite growing concerns about a possibleoffshore drilling rig oversupply, owners continue to place orders to build more jackups, semisubmersibles, drillships, and tender-assisted rigs. Since last year, 103 additional rigs have been ordered. By far, the most new orders have been for jackups, which accounted for 77 of the total. Drillships were next with 18 new orders, followed by six semis and two tender-assisted rigs. The latest data can be seen in this year's worldwide MODU construction/new order survey.

The bulk of the new rig order awards have gone to Chinese shipyards, which is a testament to the country's pursuit of an increased slice of the offshore rig-building pie by using its attractive rig-financing offers. As expected, Singapore and South Korea remain popular spots to build rigs. Meanwhile, the United Arab Emirates is growing its rig-building business as well, having achieved seven new orders in the past year. Construction has begun on 38 of the 103 orders.

Accounting for those currently under construction or being rebuilt as of June 3, 101 are jackups, 35 are drillships, 18 are semis, and 7 are tender-assist rigs, for a total of 161 units; plus the semiOcean Apex, which is being rebuilt. Around this time last year, 131 rigs were under construction or being rebuilt. Since then, 61 rigs have been delivered. Throughout the remainder of this year, 51 rigs are scheduled for delivery. However, the past year has seen slippage due to delivery delays of third-party supplied equipment, so it is likely that some of the units scheduled for shipyard delivery late in the year will be pushed into early next year. The rest of the currently under-construction rigs have anticipated due dates out to 3Q 2017.

China and Singapore are building predominately jackups, whereas South Korea's main projects are drillships. South Korea is also responsible for building nearly half of the 19 semis currently under construction. Of the seven tender-assist rigs being built, five are under construction in China and two in Malaysia.

Only 26 of the rigs under construction were not built on a speculative basis. Rather, they were ordered with a firm drilling contract already in hand. That leaves 135 rigs ordered without contracts that need to find work prior to delivery in order to avoid zero-rate idle time. So far, 25 of them have secured assignments. However, some of the other 110 rigs are actually being built with a specific target market or customer in mind, such as the jackups being built for Mexico's Grupo R, Oro Negro, Perforadora Central, and Perforadora Mexico. All of the rigs are aimed at the Mexican market, namely state-owned operator PEMEX.

The further the delivery date is in the future, the less aggressively the rig is likely to be marketed, especially when day rates seem to be making a market correction and either slowing their growth rate, or in some cases trending lower. Contractors would prefer to wait it out in the hopes of catching the next upward wave rather than locking in a rate during a plateau or decline.

Rig owners continue to prefer higher-specification rigs. This is a direct result of their desire to remain competitive in a market in which oil companies are focusing on prospects that are increasingly difficult to drill.

Looking at the 35 drillships currently under construction, all but two are ultra-deepwater (>7,500 ft/2,286 m) rigs. Many of these drillships are being built either with two BOP stacks or with the capacity to add a second stack should the operator require it. The number of rams on each stack has also been trending up since the April 2010 Macondo accident put the spotlight on BOPs. Presently, the majority of the ultra-deepwater drillships under construction will have either six- or seven-ram stacks. Before Macondo, the highest-specification rigs typically had five or six rams.

Derrick capacity is another important spec that is trending up, with many units now being built with 2.5 MMlb capacity derricks. Additionally, as rigs are working in deeper waters farther from shore, the need for increased free deck space grows. New ultra-deepwater drillships are generally being built with variable deckload capacities upwards of 20,000 tons.

The push toward higher-specification units also exists within the jackup segment. Of the 101 currently under construction, only 12 will be rated for water depths less than 350 ft (107 m). The most popular water depth rating for under-construction jackups is 400 ft (122 m). In addition, four units are being built with a rated water depth capability of 492 ft (150 m), three for Maersk Drilling and one for Noble Corp. The higher-spec jackups are mostly being marketed to theNorth Sea and Norwegian markets, while the lowest-spec units are primarily targeted at operations in the Middle East and offshore China.

Finally, this building boom does not involve only the major rig contractors. Nearly 40 different companies are building rigs. Only one company has double-digit rigs under construction. Seadrill has 11 units being built, comprised of four jackups, two semis, and five drillships. The next most active rig contractor is Ensco with six, followed by Grupo R and Maersk with five each. Notably, the largest offshore rig contractor, Transocean, only has three units currently under construction.