Reducing the weight of an offshore platform's topsides is critical when considering the overall economics of a project. Designing and fabricating topsides that reduce the number of modules required – thereby reducing the weight – helps control costs and schedules during the early phase of design. To help with this task, operators are searching for the newest software to incorporate all of the topsides requirements during the designing process. 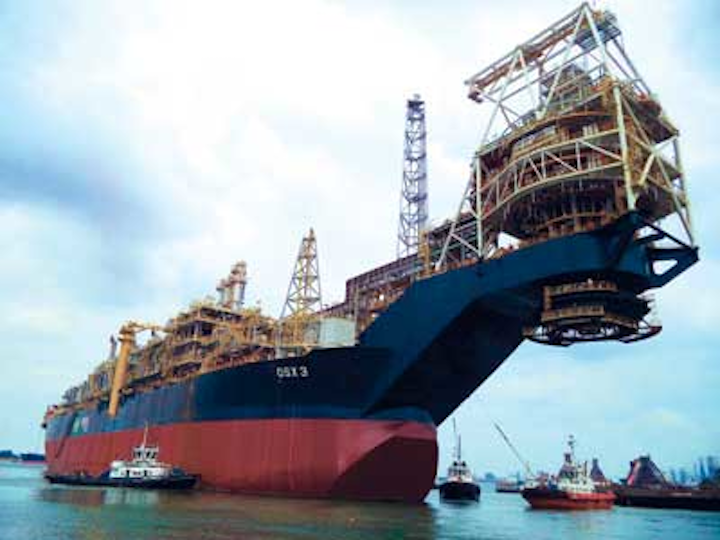 Reducing the weight of an offshore platform's topsides is critical when considering the overall economics of a project. By designing and fabricating topsides that reduce the number of modules required, thus, reducing the weight helps control costs and schedules during the early phase of design.

To help with this task, operators are searching for the newest software to incorporate all of the topsides requirements during the designing process.

In 2011, MODEC, Inc. received an engineering, procurement, construction, and installation contract for the supply of an FPSO,OSX-3, to be used within block BM-C-39 of the Campos basin, offshore Brazil, on the Waikiki Pero Inga fields.

The company turned to L&T-Valdel Engineering, headquartered in Bangalore, India, to provide modularization design for the FPSO topsides. The company had to complete the design of 15 modules and 10 pipe racks within 12 months – two to four months quicker than for similar projects. The scope of work also included the performance of pre-service analysis of lift, load-out, and barge transportation, and in-service analysis of operating, survival, no-shutdown, ship damage, and ship transportation conditions.

"An EPC project always demands a very tight schedule and optimization – two things that are basically contradictory," explained Sharad Jain, lead structural engineer, L&T-Valdel. "The biggest challenge was to complete the project on time; the first steel drawings were to be issued in four months, while optimizing the design."

"Basically we had only four months to perform optimization, analysis, and have final AFC (approved for construction) drawings," said Jain.

SACS is an integrated suite of software that supports the analysis, design, fabrication, and installation of offshore structures, specifically FPSO topside structure. The software is designed to improve infrastructure operational safety, and minimize risk while ensuring compliance for a broad range of structures. STAAD.Pro is a structural analysis and design engineering software that was used for the vessel's tertiary steel. The software enabled the team to standardize the pipe supports used throughout the project, which helped the team to complete the project within the stipulated time.

SACS helped L&T-Valdel find optimum structural arrangements for the topside while various utilities were used to reduce the steel quantities while ensuring safe design. The company had to analyze all static and dynamic loads on the module under pre-service and in-service conditions. This required consideration of the various conditions these modules would experience during their in-service tenure such as ship acceleration, ship damage, ship deflections, and the support conditions considered – analyzing load combinations for heave, pitch, roll, heel, trim, hog, and sag, plus all eight wind directions. A total of 175 analyses were required for 25 modules.

"Modeling the modified joints solved the failure problems that would otherwise have required a whole section to be replaced," Jain said. "This helped in cutting down the steel weight. To provide minor axis stiffening for the overall structure, the software was used to change the properties of a previously modeled deck plate instead of adding a truss or trimmers. These measures not only reduced steel weight but also required less fabrication work at less cost."

Additionally, the software improved design accuracy and visual clarity, which reduced onsite construction time and material. Optimizing the layout of pipe racks spanning 98 ft (30 m) each and reducing their height, helped to achieve a reduction in the total weight. It also identified local failures in sections and plates. By modeling modifications rather than replacing entire sections, the total steel weight per module/pipe rack was reduced by 10%. The software's model viewer provided a clear visualization of lifting arrangements and detected structural clashes, helping to avoid major rework.

"In the present industry dynamics, effective cost management is the only mantra for competitiveness and sustainability. Engineering software has emerged as the principle tool to reduce the engineering cycle time and achieve desired results," said Jain.

STAAD.Pro was used to design thousands of pipe supports, monorails, equipment supports, stairs, and other tertiary steel, enabling the team to standardize the pipe supports.