Fincantieri has introduced two new drillship concepts, both designed to cater for future needs in ultra-deepwater and harsh environments. 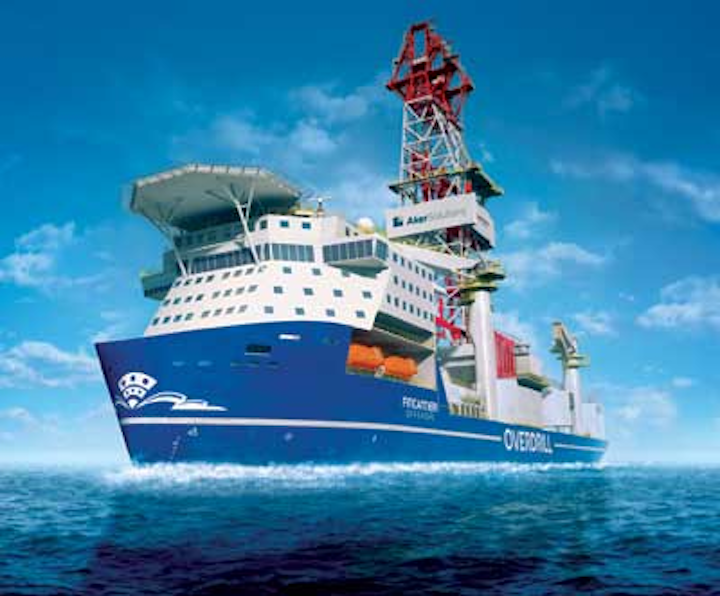 Fincantieri has introduced two new drillship concepts, both designed to cater for future needs in ultra-deepwater and harsh environments. Overdrill and Proxima share many features, but are targeted at clients with differing demands. Of the two, Proxima offers also a higher level of technical innovation of the drilling system.

Two years ago, the Trieste-based shipyard group was looking to enter the ultra-deepwater drilling sector after forming a new offshore business division. Previously the group, better known for cruise and naval vessels, had built three drilling semisubmersibles and one jackup for Saipem. Late in 2012 an opportunity arose to bid for two new drilling vessels. Although Fincantieri missed out, the offshore team decided instead to formulate a proposal for its own in-house designs.

"We had been working on our own concepts for around a year," says Giuseppe Coronella, executive vice president of the offshore business unit. "We had been in touch with the major players – drilling contractors, global oil and gas companies – about their future requirements for ultra-deepwater in remote regions. Drillships are better suited to this sector than semis because of their higher variable deck load.

"We learned that the clients needed vessels with more deck space and a more variable deck load, and capable of operating with higher dynamic and static loads. They also wanted the capability to handle dual BOPs and to pave the way for a possible upgrade of their equipment. One example is the desire to accommodate the 20,000-psi BOPs that most clients are thinking of installing once the drilling vendors have fine-tuned the technology.

"In addition, we noted the need for improved drilling capabilities and performance to extend operational time with heavier, larger-diameter casings. Also, there are requirements to drill through HP/HT (high-pressure/high-temperature) reservoirs more safely, with control of kick-back in higher-pressure, deeper and complex wells, and to be able to operate with a higher degree of efficiency in remote areas." The initial result was Overdrill, designed in co-operation with Aker Solutions, followed last year by Proxima.

The two concepts have similar dimensions – both drillships are 208 m (682 ft) long, with a breadth of 40 m (131 ft) and a variable deck load of 32,000 metric tons, and both can operate in DP-3 mode drawing on 33 MW of thruster power in water depths of up to 12,000 ft (3,658 m). Compared with other deepwater drillships either in operation or under construction, the variable deck load is about 30% greater, Fincantieri says, while the maximum drilling depth of 50,000 ft (15,240 m) is said to be an improvement of 25% over the competition. Both vessels also provide more than 4.5 million lb of riser tensioning capacity, and can accommodate two 20,000-psi BOPs.

These and other shared characteristics make them suited to operations in ultra-deepwater scenarios. However, they are targeted at a different audience. "Clients have their own visions of how they want to use these vessels," Coronella explains. "Some want less risk in innovation, and Overdrill responds in that sense. With Overdrill, the focus has been on integrating advanced but proven drilling systems inside the hull in order to lower the center of gravity, which leads to greater stability. We have 'squeezed' the size of the vessel but improved drilling performances, safety, automation, and ergonomy of the processes on board. Proxima also incorporates some integration, but here we have focused on innovation in the drilling systems and the way of drilling."

The standout feature is the cylindrical-shaped, lean drilling towers designed by Castor Drilling Solution in Norway that provide a 3.3 million-lb dual-derrick system (32% above other drillships, Fincantieri says). Other novelties include the energy-efficient hydraulics system for the lifting winches; two moonpools instead of one; a retractable thruster system; and a riser handling system integrated beneath the weather deck.

The impact of these and other innovations in the vessel layout are said to include improved efficiency and safety and increased sea-keeping capacity, with less weather downtime and lower thruster power to maintain the vessel's position. In transit, Proxima can reach a speed of more than 14 knots, claimed to be at least 22% above the norm for traditional drillships with a similar power capability.

"Drilling in deeper water, combined with the need to reduce the time for drilling and completing these wells, requires longer and larger diameter casing strings up to 22-in. diameter," says project manager Luca Ambrosio. "On our vessels the variable deck load is designed to support the additional weight of these casing strings and to strengthen the part of the vessel where they are stored. We also need to provide the derrick with sufficient lifting capability to lift these strings, which we have done on both drillships. In addition, we have increased the capacity in terms of weight for the setback. The average for the industry is 1,200-1,500 metric tons, whereas our vessels have a capacity close to 2,000 metric tons."

The slanted drilling towers, adapted from equipment used by the offshore wind sector, are fully retractable, allowing maintenance of all tower components using a deck crane. They are located on the main drilling deck, positioned on one side of the bottom of the double-hulled ship. There is a second, more open deck at drill floor level which extends the working area from the pipe deck located aft to the accommodation block, leading to improved visibility with less risk of dropped objects.

One of the benefits of the lean towers profile and the position of the setback from the drill floor is reduced impact from lateral wind forces, says senior designer Gianni Scherl. The lower setback location also lowers the ship's center of gravity, allowing it to operate in slightly rougher seas.

The drilling towers incorporate multiple lifting wires for redundancy/safety purposes, operated by low-speed, low-noise hydraulic lifting winches that provide a higher tripping speed varying from +20% to +70%, depending on the lifting load. The compensating system is located beneath the winches at drill floor/cellar deck level.

According to Coronella, "the hydraulics system for the lifting winches is in our opinion a major step forward. It is designed with a buffer regeneration system that supplies power to lift the top drives of main and auxiliary hooks, but also accumulates energy during lowering of top drive, hooks or hoist. The normal standard load is 1 MW, but if peaks four times this amount are needed, the buffer responds by providing the required energy." This is made possible, adds Ambrosio, by means of a pressure vessel, which recovers the energy released by the hydraulic motors acting as brakes during the lowering of the top drives; it is installed in parallel with the hydraulic power unit (HPU). "Compared with a conventional electric drawworks, this system can provide the same lifting capacity but with lower consumption of total power."

Fincantieri's studies found that the single 30-m (98-ft) moonpool amidships on a typical drilling vessel often results in sloshing and wave generation inside the moonpool. This combination can add to the resistant forces acting on the vessel during transit, slowing it down. As a counter-measure, Proxima has been equipped with two smaller moonpools with smaller cylindrical openings, 26 m (85 ft) apart. Hydrodynamic analysis/model tests have confirmed lessened resistance in transit and a reduction in sloshing. "This explains Proxima's 14-knot transit speed, which is 2 knots faster than traditional drillships with similar power," Ambrosio says. According to Coronella, these are benefits that drilling contractors focused more on exploration have been asking for.

Proxima, like Overdrill, has total installed power of 45.5 MW and 33 MW of thruster power. "We did not aim to reduce the overall power installed, but to use it better to achieve improved performance," Ambrosio explains. "We used two theoretical models for examining dynamic position/sea-keeping, and our tank trials confirmed our analysis. Our aim is not to expand power consumption, but to give the contractor more extended vessel operating time. If as a result you can perform the operation quicker, that also increases the vessel's green credentials."

Fincantieri has gathered together a network of specialist companies in Italy and elsewhere for its drilling projects under the umbrella Polo Offshore. One resultant innovation on Fincantieri Drillship Designs is the integration of the riser hold into the hull, beneath the weather deck and the automation of the riser handling. "Inside the riser hold there is a lifting device that is used to lay down the riser in the catwalk before introducing it into the derrick," Coronella explains. "The need for this arrangement arose because most standard drilling vessels concentrate automation inside the derrick, and we noticed that there is still space for extending the automation to the entire process which starts from the riser handling.

"Our presentations have drawn interest in adaptation of this system also for use in other vessels." Another innovation that has created surprise, Coronella says, is the mechanically-driven retractable thruster system, again part of the integration philosophy. The arrangement does not foresee the use of canisters to interface the thrusters with the hull, leading to a weight saving of around 400 metric tons. "This connection is possible because of the design of the structure around the thruster system. It means that in open seas you can retract the thrusters close under the hull, and empty the thruster tunnel to work out the typical inspection and maintenance activities."

Fincantieri has staged roadshow presentations on the two new drillships, with many favorable comments, according to Coronella, particularly on the level of innovation. "Many contractors say they like our designs, but you don't have a track record in drillship construction. So we have responded by developing full-scale 3D virtual-reality mock-ups of Proxima and Overdrill that makes the audience feel as if they are really inside the vessels. It is very useful, as it provides the participants with remote controls for the equipment that they can 'operate' via tablets in their hand, providing them with extra assurance."

If the group is successful in winning a contract to build a drillship, it plans to do this at its various shipyards devoted to the offshore projects with equipment provided by its network of suppliers. Historically, the cost-fixated industry has assigned drillship construction almost exclusively to the Far East, but Coronella says, "we are able to deliver to our clients the ship of tomorrow which, there is no doubt needs to have a significant content of innovation and customization, while our competitors leverage mainly on their standard products.

"If clients stick only to the conservative approach on drillships, there will be more standard vessels, yet reports suggest that there are too many standard drilling vessels on the market, with drilling contractors worried about not providing work for their fleets. These 'standard' vessels will not serve coming requirements in remoter areas such as ultra-deepwater Mozambique or the Arctic. Without greater innovation, you may not be able to work in these regions."