As the world's production, market prices and variable demand have remained in flux, so too has the activity for floating production, storage and offloading vessels. But, due to several inherent advantages, this vessel type has more options to see active service than other floating production system types. These advantages include operating flexibility, range of water depth, conversion possibilities, and storage capacity range. 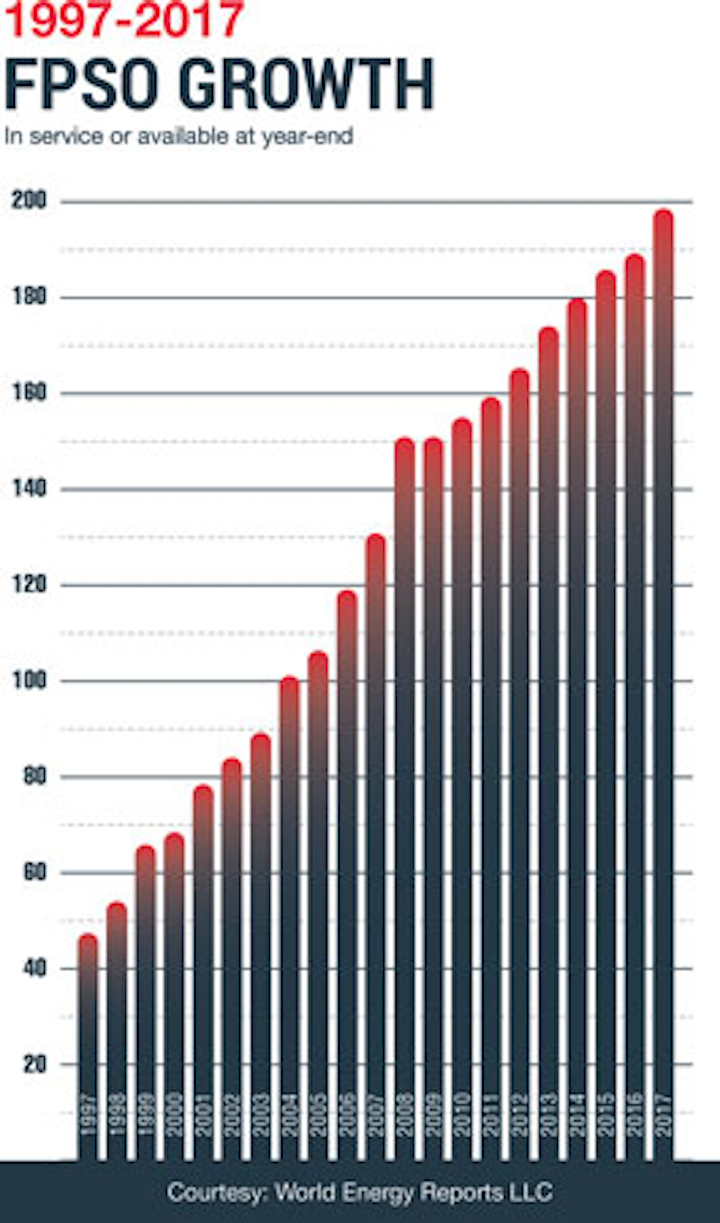 As the world’s production, market prices and variable demand have remained in flux, so too has the activity for floating production, storage and offloading (FPSO) vessels. But, due to several inherent advantages, this vessel type has more options to see active service than other floating production system types. These advantages include operating flexibility, range of water depth, conversion possibilities, and storage capacity range.

In comparing year-to-year vessel counts,Offshore’s 2017 Worldwide Survey of Floating Production, Storage and Offloading units poster has shown a growth from 169 active vessels in 2016 to 178 FPSOs either in operation as of July 1, or slated to reach first production by the end of 2017. The survey results have also shown an increase in worldwide vessels available awaiting redeployment, currently numbering 19 FPSOs. That count has continued to rise, even in the short period from Offshore’s Deepwater Solutions & Records for Concept Selection poster (May 2017), which included FPSOs and recorded 17 non-operating but deployable vessels.

The mix of the FPSO vessels in service has not changed appreciably. In 2016, the percentage of active vessels owned by a contractor company for lease to a producer was 52%. The remainder were owned by production companies for their own use. In 2017, that percentage of FPSO contractor-owned vessels for lease was approximately 51%. The percent of active FPSOs converted from vessels formerly serving as very large crude carriers (VLCC) has remained relatively constant year-to-year when compared to newly built vessels entering into service, 71% in 2017 vs. 70% in 2016.

According to statistics provided byWorld Energy Reports, 12 FPSOs have been sanctioned and are at some stage of construction for delivery in 2018 or beyond. Their statistics reveal that the majority of these planned vessels, 55%, are destined for water depths greater than 1,000 m. The balance are intended for water depths less than 1,000 m, but these still total approximately 45% of planned vessels, demonstrating the FPSO water depth versatility.

Vessel design commonalities can be cost effective and have prompted the industry to standardize on vessel storage capability and throughput, wherever possible. For example, two FPSOs destined for deployment offshore Angola in 2018 are currently being converted by Saipem for use in identical water depths and storage capability. Similarly, Petrobras is still proceeding with construction of vessels from a standard conversion template; these vessels will operate offshore Brazil with installations from 2017 to 2019. Petrobras’ most recent tender for VLCC conversion, if approved, will add a fifth vessel to the Buzios complex, joining four others on order, each with 180,000 b/d production capability.

Oil and gas price fluctuations are not only difficult to project, but they often require short-term decisions for increasing or curtailing production. FPSOs generally offer a cost-effective solution, especially for marginal fields and changing price conditions. As noted, FPSOs can be converted from previously used storage vessels tankers. It is estimated that single-hull conversions can be accomplished at a cost of 10% of newbuilds and, depending on the extent of the required conversion, can be available for service within a two-year timeframe - normally 20% less time than for construction of a newbuild FPSO. 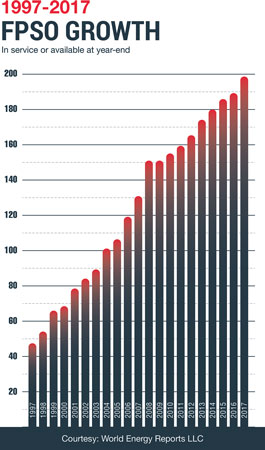 Reservoir economics have contributed to a growth in the number of vessels taken from service and listed as “available” by their owners, awaiting contracts to resume production. Because of their mobility, leased FPSOs are normally the fastest and least expensive means of reaching first production, especially in smaller or marginal fields. Their future redeployment, however, is not a certainty. Once industry conditions rebound sufficiently to make these vessels attractive for reuse, however, there are potential hurdles that must be addressed.

Technical and constructability issues could be a problem for vessels to return to the active fleet. Of the 19 available vessels noted in this year’s annual FPSO survey and poster, more than half are fabricated with a single hull. While this feature makes them considerably less expensive and quicker to convert, their usefulness, once converted, can be compromised. Since they are already in maturity from previous service, their structure makes them more susceptible to fatigue and a shortened useful life. That single-hull construction, in the US Gulf of Mexico and other production regions, makes them unacceptable to regulators and certification agencies.

Several vessels have undergone multiple redeployments and are nearing the end of their useful life. For example, the Petrojarl 1 is awaiting its 11th reassignment since its first service 30 years ago. Its next assignment, offshore Brazil, is the first of its redeployments outside of the North Sea.

This factor could be beneficial due to the less demanding environment to which it is going. However, to determine their serviceability, available vessels undergo a thorough cost/benefit examination to determine if they are indeed redeployable or should be permanently decommissioned and scrapped. Depending on the selected field for reuse, a stacked vessel needs to be thoroughly inspected and found structurally and commercially suitable with its existing mooring, accommodations, topsides modules, and anticipated turret loads. Altering these components can lead to significant expenditures and installation delays.

Other issues can hamper the cost of refurbishment and re-introduction of an out-of-service vessel. Reservoir characteristics of a new field could impact the effectiveness of the topsides facilities. Fluid viscosity, pressures, temperatures, and suitability of current gas compression and dehydration can require replacement or addition of upgraded capabilities.

Flow rates vs. storage capacity have to be analyzed. While many conversions are from VLCCs with large storage capability, smaller storage vessels can require de-bottlenecking and more frequent production offtakes from the FPSO to shuttle tankers, diminishing the commercial feasibility.

All offshore oil and gas businesses are being prompted by the Internet of Things (IoT) to shift their operational paradigms into the digital world. FPSO contractors and producers are no exception. Their goal is to increase productivity and reduce costs, but there is no “one size fits all” solution. Rather, FPSO operators are continually adapting and fine tuning their assets in real time using trend analysis and data analytics. These cutting-edge tools and software can be valuable predictors of potential failure by incorporating repair history, operating conditions and fleet data. The analytic tools can also determine probable root causes and estimate remaining useful life of topsides components.

Many FPSO owners and operators are incorporating IoT and these digital tools into their vessels while idle and upgrading their systems on newbuild vessels. The end result, if data is integrated within their organizations, could be substantially increased production efficiency and dramatically reduced operating costs.