US Secretary of the Interior Ryan Zinke has announced the next step for developing the 2019-2024 national outer continental shelf oil and gas leasing program. 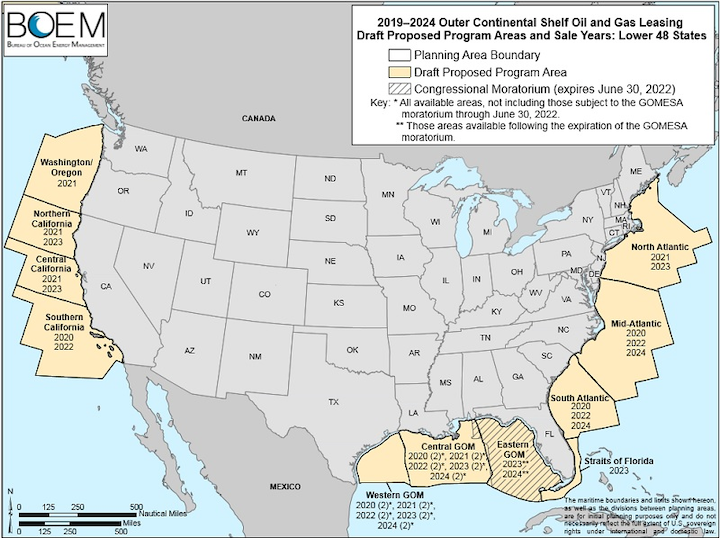 WASHINGTON, D.C. – US Secretary of the Interior Ryan Zinke has announced the next step for developing the 2019-2024 national outer continental shelf (OCS) oil and gas leasing program.

The draft proposed program (DPP) makes more than 90% of the total OCS acreage and more than 98% of undiscovered, technically recoverable oil and gas resources in federal offshore areas available to consider for future exploration and development. By comparison, the current program puts 94% of the OCS off limits.

Secretary Zinke said: “Responsibly developing our energy resources on the outer continental shelf in a safe and well-regulated way is important to our economy and energy security, and it provides billions of dollars to fund the conservation of our coastlines, public lands and parks.

“Today’s announcement lays out the options that are on the table and starts a lengthy and robust public comment period. Just like with mining, not all areas are appropriate for offshore drilling, and we will take that into consideration in the coming weeks. The important thing is we strike the right balance to protect our coasts and people while still powering America and achievingAmerican energy dominance.”

The draft proposed program includes 47 potential lease sales in 25 of the 26 planning areas. This is the largest number of lease sales ever proposed for the national OCS program’s five-year lease schedule.

This is the first time the majority of the Eastern GoM planning area would be available for leasing since 1988.

No sales are proposed in the North Aleutian basin planning area that has been under Presidential withdrawal since December 2014.

Release of the DPP is an early step in a multi-year process to develop a final national OCS program for 2019-2024. The draft proposal was informed by about 816,000 comments from a variety of stakeholders, including state governments, federal agencies, public interest groups, industry, and the public.

In conjunction with the announcement of the DPP, the Department of the Interior is also publishing a notice of intent (NOI) to prepare a draft programmatic environmental impact statement (EIS), in accordance with the National Environmental Policy Act.

Public meetings will be held around the country starting on Jan. 16, 2018, to receive comments on the DPP and to inform the draft programmatic EIS. Using the information received from these public meetings, BOEM will prepare a proposed program (PP), which will be published for public comment, to be followed by a proposed final program (PFP).

In addition, the department will prepare a draft programmatic EIS to be published concurrently with the PP, and a Final EIS with the PFP.

The DPP and the NOI will be available for public comment for 60 days following the publication of the documents in the Federal Register.

The 2017-2022 five-year program will continue to be implemented until the new national OCS program is approved.

Acting BOEM Director Walter Cruickshank said: “American energy production can be competitive while remaining safe and environmentally sound. Public input is a crucial part of this process, and we hope to hear from industry groups, elected officials, other government agencies, concerned citizens and others as we move forward with developing the 2019-2024 national OCS program.”