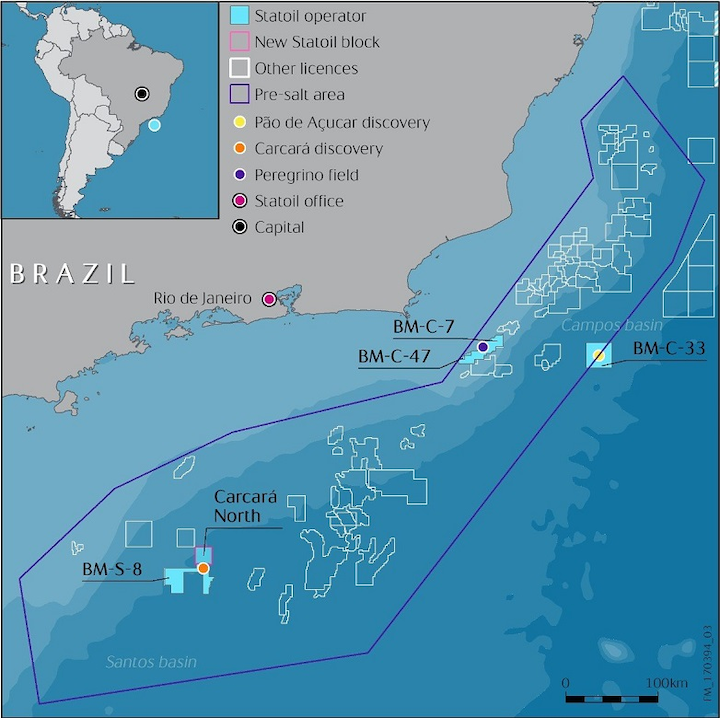 This involves the partnership paying the government a percentage of profits from oil revenues, minus production costs and royalties.

The offer of surplus in profit oil to the federal government was the sole criterion the licensing agencyANP adopted to define the winning bid, Petrobras said.

For the presalt Entorno de Sapinhoá block in the central Santos basin – a newly unitized area adjacent to the Sapinhoá development – Petrobras’ partners are Shell and Repsol Sinopec.

In August, Sapinhoá was Brazil’s second largest field in terms of oil and gas production at 325,000 boe/d.

Petrobras will pay a total signature bonus of R$ 1.14 billion ($371 million) representing 0.5% of the investments anticipated in the 2017-2021 Business and Management Plan.

Aside from this block,Shell bid successfully for two further 35-year production-sharing contracts (PSCs) for presalt blocks in the Santos basin, and will pay total signing bonuses of around $100 million.

Andy Brown, Shell’s Upstream Director, said: “These winning bids were submitted after our thorough evaluation and add strategic acreage to our already leading set of global deepwater growth options…Our deepwater expertise is well-suited for the opportunities that lie ahead.”

Prior to the bids, Shell had confirmed plans for $10 billion of investments into the early 2020s for its existing development projects off Brazil, citing deepwater as its upstream growth priority.

The company first participated in a PSC in the country in 2013 when it joined the Petrobras-led Libra consortium. Its Brazil deepwater production was recently averaging 330,000 boe/d.

Statoil,ExxonMobil and Petrogal Brasil were the high bidders for a PSC for the Carcará North block in the Santos basin, with a collective signature bonus of around $910 million.

The three partners have also agreed to various subsequent transactions in the adjacentBM-S-8 block to align their equity interests across the two blocks that together encompass the Carcará oil discovery.

For Statoil, the potential consideration for selling half its 66% stake in BM-S-8 to ExxonMobil could reach $1.55 billion. And following the future closing of its acquisition of the 10% interest in the block held by Queiroz Galvão Exploração e Produção (QGEP), Statoil has agreed to transfer a further 3.5% to ExxonMobil and 3% to Galp for around $250 million.