Harvey forces more shut-ins, evacuations in the Gulf of Mexico

Personnel have been evacuated from 98 production platforms in the Gulf of Mexico in response to Tropical Storm Harvey, according to the Bureau of Safety and Environmental Enforcement. 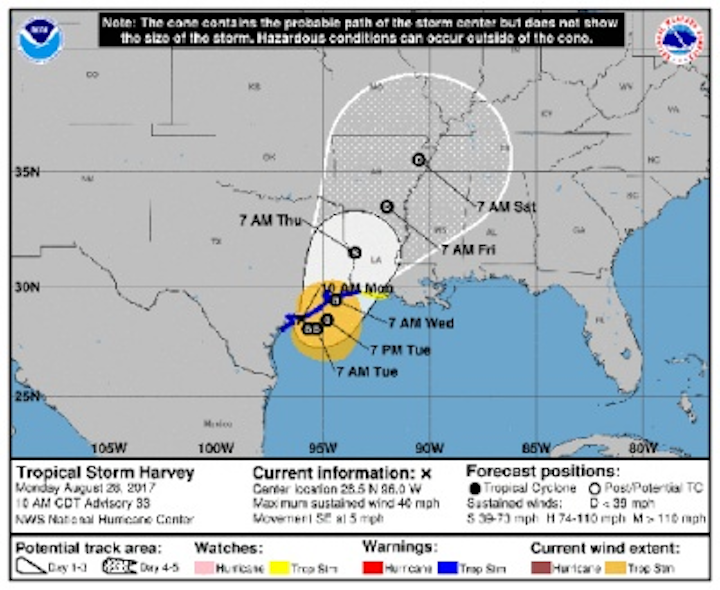 NEW ORLEANS — Offshore oil and gas operators in the Gulf of Mexico continue to evacuate platforms and rigs in response to Tropical Storm Harvey, according to the Bureau of Safety and Environmental Enforcement.

Based on data from offshore operator reports submitted as of 11:30 CDT today, personnel have been evacuated from a total of 98 production platforms, 13.3% of the 737 manned platforms in the Gulf of Mexico.

Personnel have been evacuated from five rigs (non-dynamically positioned (DP) rig), equivalent to 50% of the 10 rigs of this type currently operating in the Gulf. No DP rigs have moved off location out of the storm’s path as a precaution.

Operators have also updated their Gulf of Mexico operations.

On Sunday, Anadarko reported that crews have returned to the Lucius platform and it expects to restart production as pipelines permit. Production has resumed at its Constitution, Heidelberg, Holstein, and Marco Polo facilities.

The company added that personnel will not return to the Boomvang, Gunnison, and Nansen spars in the western Gulf until Tropical Storm Harvey has cleared the way for a safe return.

On Saturday, Exxon Mobil Corp. reported that all personnel have been evacuated from offshore facilities affected by the storm. The Hoover and Galveston 209 platforms are shut in, as is the Hadrian South subsea production system.

BP says that its four production platforms continue to operate in the deepwater Gulf.

ConocoPhillips says that production from its Magnolia platform is unaffected.

Shell announced via social media that the US Coast Guard visually confirmed the structural integrity of the Perdido spar during a flyover on Saturday.