As Tropical Storm Harvey moves east into Louisiana, oil and gas operators in the Gulf of Mexico are responding both on and offshore. 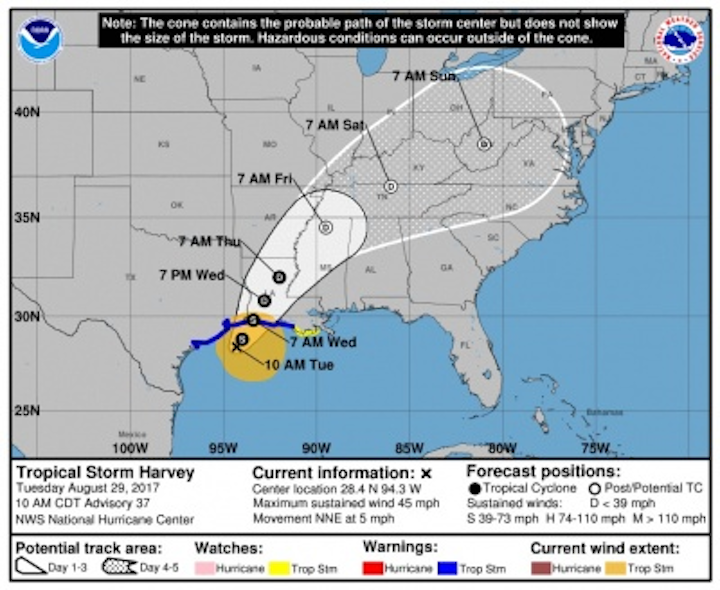 HOUSTON and NEW ORLEANS– As Tropical Storm Harvey moves east into Louisiana, oil and gas operators in the Gulf of Mexico are responding both on and offshore.

According to the Bureau of Safety and Environmental Enforcement, based on data from offshore operator reports submitted as of 11:30 CDT today, personnel have been evacuated from 102 production platforms, 13.84% of the 737 manned platforms in the Gulf of Mexico.

Personnel have been evacuated from five rigs (non-dynamically positioned (DP) rig), and no DP rigs have moved off location.

Anadarko reports that production has resumed from the Lucius spar platform. It added that Boomvang, Gunnison, and Nansen in the western Gulf will remain shut in until the weather permits the safe return of its personnel to these facilities.

Operators have also increased their support forrelief efforts in Houston and surrounding Texas communities that have been impacted by the storm.

BP and the BP Foundation have donated $750,000. The donation, which will help provide flood victims with food, water, health services and shelter, will be divided equally among the American Red Cross, Community Foundation of Greater Houston, and United Way of Greater Houston.

The BP Foundation said that it also will match dollar for dollar donations that company employees make to these organizations or a local disaster relief organization of their choice to support relief efforts.

John Mingé, chairman and president of BP America in Houston, said: “The impact this unprecedented storm has had and continues to have on our employees and neighbors in the greater Houston area and across Texas is heartbreaking. But we know that Texans are not only resilient, but also compassionate, and that we will all work together to recover from this.”

In addition, ExxonMobil announced that it has increased to $1 million its support for relief and recovery efforts in Houston and other Gulf Coast communities.