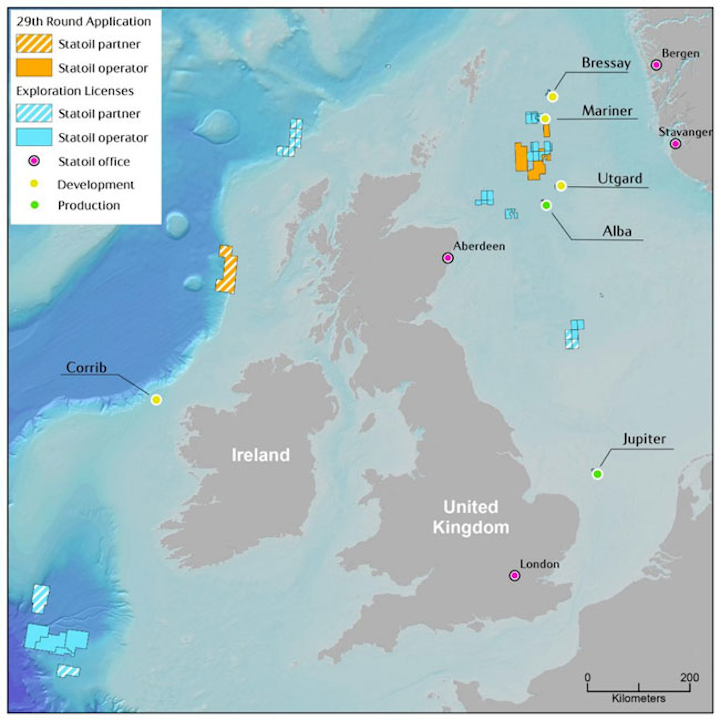 The UK’s 29th offshore licensing round

STAVANGER, Norway – Britain’s Oil & Gas Authority has awarded Statoil six licenses, five as operator and one as partner, under the UK’s 29th offshore licensing round.

The five operated licenses are all in the northern North Sea. Statoil and partner BP have committed to three firm exploration wells in this area.

The other license, which Esso Exploration operates, is west of Scotland.

Statoil says it is lining up one of the most active exploration campaigns in UK waters this year, with three exploration wells due to be drilled during the summer.

PartnerJersey Oil and Gas commissioned ERCE to review the latest geological, geophysical, and petrophysical interpretations of the license.

ERCE estimates prospective resources of 162 MMboe at Verbier, and 124 MMboe for the Cortina prospect.

Verbier is along the northern flank of the Buchan High. Well 20/5a-10Y, drilled by Talisman in 2006, penetrated 46 ft (14 m) of oil-bearing Upper Jurassic sandstone in the Kimmeridge Clay Formation, the ‘J64 Sands,’ at a location along strike from this summer’s planned well.

Cortina is around 6 km (3.7 mi) to the east. The trap is broadly similar to Verbier, but lies at a greater depth.

It comprises stratigraphic and dip-closure in the east, north, and west, with fault-seal required toward the south. Like Verbier, the seismic image suggests a fan-shaped deposition.