The semisubmersible Eirik Raude is drilling the phase 1 wells for the Jubilee field development. 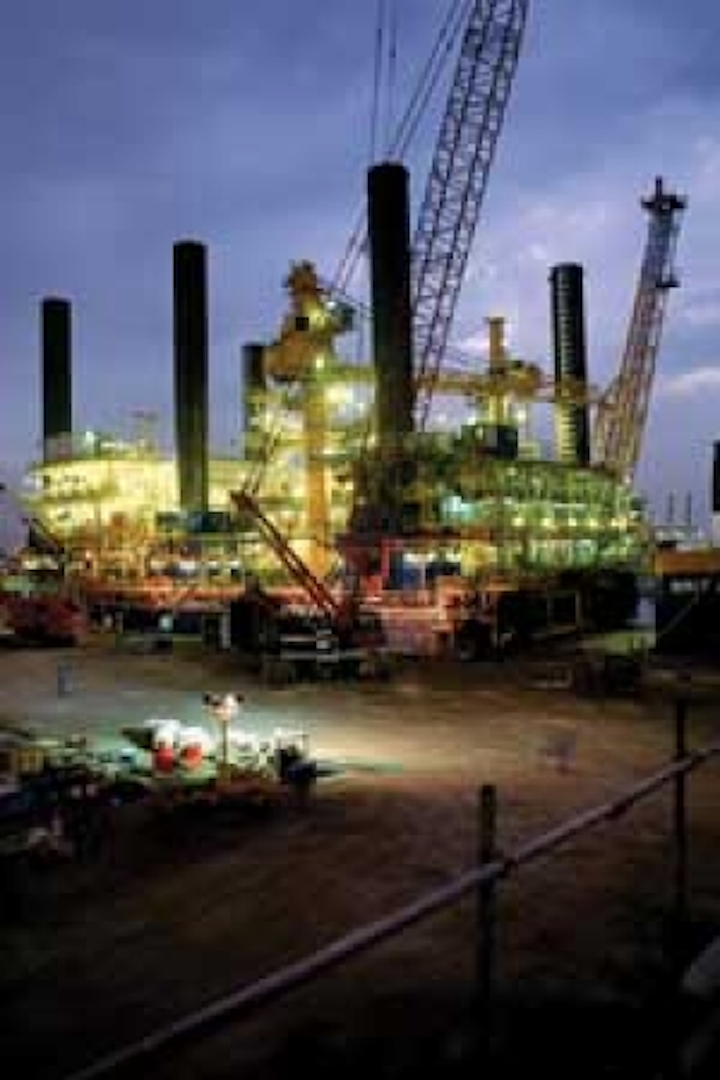 Africa keeps growing in offshore production and also in areas for exploration. On the production front, Angola and Nigeria are familiar names now being joined by Ghana, among others. For exploration, such unexpected names such as Kenya and Guinea are popping up.

The latest plans for the $3.1-billion Phase I of Jubilee offshore Ghana call for first oil before the year is out. According to operator Tullow Oil, this first phase has nine production wells reaching 120,000 b/d of oil with six water injection and two gas injection wells maintaining the drive.

Tullow also says there might be more to come from the Greater Jubilee area. The Sapele and Dahoma satellite exploration projects are to the southeast of Phase I and the first steps in exploratory drilling are in progress.

With all the Phase I drilling complete at Jubilee, the downhole equipment for production and water/gas injection are being installed by theEirik Raude, and an FPSO for the field is in construction at Singapore. Earlier this year work on installation of the process modules, external turret, and commissioning were proceeding on schedule. The subsea equipment is ready for installation, says Tullow, and work on installation of flowlines, seabed piles, manifolds, and control umbilicals is in progress.

At the end of last year, Tullow awarded Technip two contracts for Jubilee. One included the engineering and fabrication of seven 10-in. (25-cm) diameter and two 8-in. (20-cm) diameter risers with a combined length of 27 km (17 mi). The second was for engineering, fabrication, and installation of 48 km (30 mi) of production and gas/water injection flowlines; installation of 26 km (16 mi) of umbilicals, nine flex-risers, plus the subsea manifold and riser base. Technip also will connect the flowlines to the wellheads and subsea manifolds, then test the complete system.

Tullow has ordered 19 subsea trees from FMC for Phase I, and FMC also supplies the manifolds.

The overall development plan for Jubilee Phase I was approved by the government of Ghana last year. Those plans are being fulfilled with the FPSO scheme delivering 120,000 b/d of oil at full flow. The FPSO also will inject up to 230,000 b/d of water and have a gas export and re-injection capacity total of 160 MMcf/d.

Tullow’s initial equity in Jubilee, which it will operate, is 34.70%. Other partner interests are Kosmos Energy (23.49%), Anadarko Petroleum (23.49%), Sabre Oil & Gas (2.81%), EO Group (1.75%), and the Ghana National Petroleum Corp. (GNPC) (13.75%, of which 10% is carried interest).
Elsewhere, Angola continues to make progress and more is expected. According to the US Energy Information Administration, the short- and medium-term production prospects are good. Just based on existing discoveries, EIA says production capacity from offshore Angola could reach 3 MMb/d of oil by 2015. The following table shows where EIA is looking for that production to come from, and when.
Source: EIA
Just recently, Total started to develop its four-field CLOV project in deepwater block 17 off Angola. Development drilling is scheduled to start in 2012 with first oil in 2014. CLOV is 40 km (25 mi) northwest of Dalia in water depths from 1,100-1,400 m (3,609-4,593 ft) and consist of Cravo, Lirio, Orquidea, and Violeta fields.

While Total is looking at similar technological schemes to those it has used already off Angola, the FPSO might have a twist. According to Total, the processing and storage system will be designed to handle two types of oil. The Cravo-Lirio Oligocene production is 32-35º API crude and the Violeta-Orquidea production is 20-30º API. Thirty-four subsea wells will tieback to the CLOV FPSO, which will have an oil processing capacity of 160,000 b/d and storage capacity of around 1.8 MMbbl.

Mafumeira Sul will feature a central production complex comprising three platforms, linked by two bridges, and a flare tower. Oil and liquefied petroleum gas will be exported to the Malongo Oil Terminal and theSanhaFPSO, respectively.

The Mafumeira field is in block 0, in water depths ranging from 150-160 ft (45.7-48.7 m). The new infrastructure will provide for future development of additional fields in the southern Malongo area.

Off Gabon, Canadian Natural Resources is drilling from its second platform in the Olowi field. The company says it plans to drill a total of six wells from Platform B and then go to Platform A for additional drilling.

The scope includes the design of the jacket and topsides to process gas condensate for the offshore facility in 243 ft (74 m) of water. Belinda is being designed as a gas cycling project to extract condensate and re-inject the gas.

Switching sides of the country, Cove Energy has agreed to farm into five contiguous deepwater blocks offshore Kenya. Blocks L5, L7, L11A, LLB, and LL12 cover over 30,500 sq km (11,776 sq mi). All are operated by Anadarko. Cove and Anadrako already are working in an exploration campaign off Mozambique. The blocks cover Kenya’s entire deep offshore fairway, and contain numerous hydrocarbon play types. Cove describes these as typical deepwater hydrocarbons plays, with seismic indicating turbidite fan channels in structural and stratigraphic traps similar to those off Mozambique. Cove will pay DEPCO $15.5 million, inclusive of acquisition costs, reimbursement of DEPCO’s previous investment on the blocks, and funding for the forward exploration phase through June 2012. 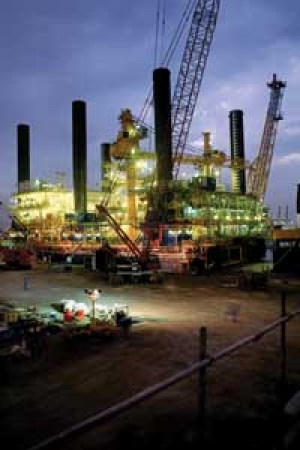