Petrobras has agreed to sell its stake in the BM-S-8 concession in the Santos basin to Statoil Brasil Óleo e Gás. 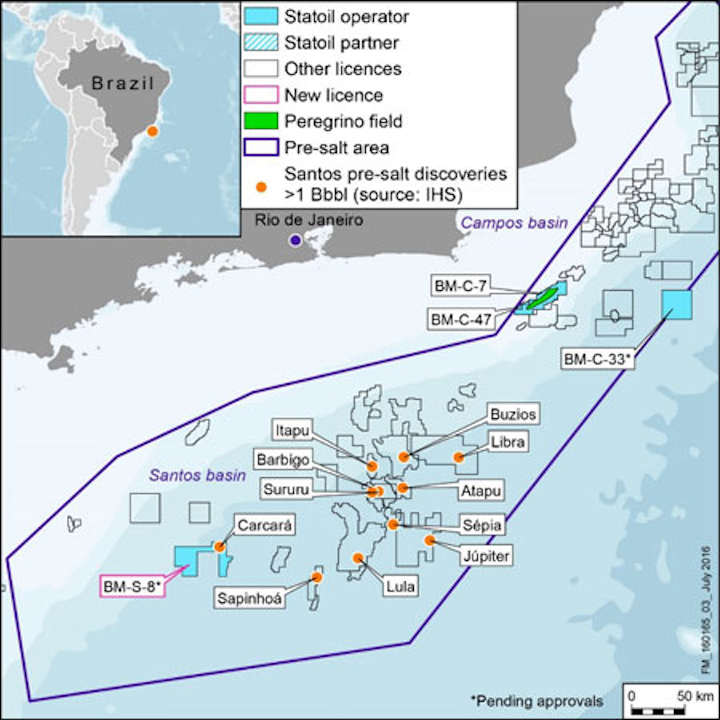 RIO DE JANEIRO – Petrobras has agreed to sell its stake in the BM-S-8 concession in the Santos basin to Statoil Brasil Óleo e Gás.

The base price is $2.5 billion, of which 50% will be paid once the transaction has closed.

The block includes a substantial part ofCarcará, one of the world’s largest finds of recent years, according to Statoil.

Carcará was discovered in 2012, on the geological trend of the nearbyLula field and Libra area. It contains 30° API oil with associated gas in a thick reservoir with good properties.

It straddles both BM-S-8 and open acreage to the north that is set to be offered in a license round next year. Statoil claims to be well positioned to operate a unitized Carcará field following this transaction.

The company estimates recoverable volumes in the BM-S-8 license at 700-1,300 MMboe, with strong exploration upside. The license is in its final exploration phase with one remaining exploration commitment well to be drilled by 2018.

Petrobras and Statoil are also negotiating a memorandum of understanding concerning a long-term strategic cooperation focused on theoffshore Campos and Espirito Santo basins, and further cooperation on gas technology projects in the Santos basin.

The deal is part of Petrobras’ 2015-2016 Partnership and Divestment Plan and completion is subject to the customary prior conditions, including the right of first refusal from other partners in block BM-S-8 and approval by the responsible authorities.