With the mature Parque das Conchas and Bijupira/Salema projects entering new phases of production, their operation continues to provide valuable regional lessons and innovations for Shell's future in Brazil, as the government plans for the first release of the huge Libra field's presalt exploration blocks in October. 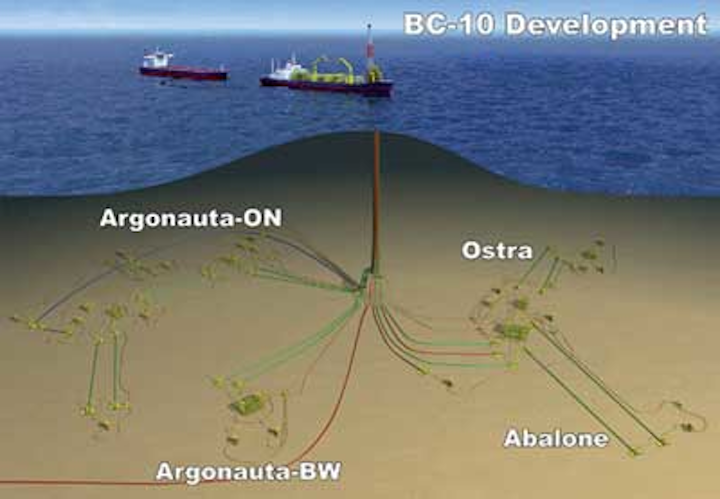 With the mature Parque das Conchas and Bijupira/Salema projects entering new phases of production, their operation continues to provide valuable regional lessons and innovations for Shell's future in Brazil, as the government plans for the first release of the huge Libra field's presalt exploration blocks in October.

The long-planned ramp-up at Shell's two main offshore operations in Brazil sees the Parque das Conchas, also known as BC-10, and Bijupira/Salema projects both heading into second-phase production, with a third phase at BC-10 planned for 2014. The BC-10 project, in partnership with Petrobras and India's ONGC, is the first full-field development to be based on subsea oil and gas separation and pumping. It will also be the site of the first full life-of-field 4D seismic monitoring system in Brazil - and the deepest installation of its kind in the world - following a multi-million-dollar contract with OYO Geospace (now Geospace Technologies) last year.Offshore met with Kent Stingl, the company's vice president of deepwater production and development, to learn more about the pioneering techniques being employed to maximize the productivity of Shell's operations in Brazil.

Offshore: Parque das Conchas and Bijupira/Salema are both mature assets, but how have they followed the planned course up to now?

Stingl: When we first discovered BC-10 back in 2000, we saw a clear path forward for a two-phase development of the project. We decided that the Ostra and Argonauta fields would form Phase 1, since combined they could produce close to 100,000 barrels a day. Given the inherent steep decline curve, this made the most sense. Rather than have all the fields come online at the same time and start to produce 250,000 barrels a day, then see it drop sharply down to 50,000, we installed the ... Espirito Santo FPSO and opted for a phased development. We had a peak of 93,000 boe/d back in early 2010, and that is now in decline, and Phase 2 will come in to produce a peak of around 28,000 boe/d.

The FPSOFluminense is 10 years old and has produced 100 MMbbl of oil from Bijupira/Salema. We're now producing around 20,000 boe/d and have just funded the redevelopment well, plus we have a rig that is going to drill four more wells there and boost production up to around 35,000 boe/d.

This third phase, however, was not something we envisaged in the original plans for Parque das Conchas. It was a case of making the best of what we already have, and forms a nice synergy with Phase 2, which will be online towards the end of this year. Our brand new, state-of-the-art dual derrickNoble Bully II drillship is fresh out of Singapore, and as soon as it is finished drilling the Phase 2 wells, it will be deployed for Phase 3.

Offshore: So there is a combination of forward planning and having the flexibility to be able to maximize your resources when opportunities arise?

Stingl: Phase 2 production was planned for the end of 2013, but we had a rig in the area, so we thought we would look elsewhere for opportunities within our block, and in 2010 made a further discovery.

This will be our fastest development from discovery to oil (forecast for 2016), and so we named the field Massa, after the Formula One driver (Felipe Massa). It will have a subsea tieback to the Argonauta B-West field, so it was a natural step and not so technically challenging, allowing it to mature very quickly.

FPSOs are usually brought in as a temporary facility to last five, six, or seven years. But we hadEspirito Santo designed to last for 25-plus years, because we knew that, even though there would be a steep decline, production life remains very long. That hub design means that you have additional capacity built in, and can explore fresh opportunities to fill it.

The timing, then, is such that as Phase 2 starts to decline, Phase 3 comes in to fill a lot of that capacity, so it's a nice way to maximize the use of the vessel and have a very continuous operation. The timing is perfect to maintain a consistency across the planning of resources.

Offshore: What have been the specific challenges of the production at BC-10?

Stingl: BC-10 is a weak aquifer/depletion drive, so we had to artificially boost the pressure to improve recovery efficiency. What we came up with, along with FMC Technologies, was a system of submersible pumps on the seafloor that give an extra 2,000-psi boost, and which is, in fact, what makes the whole operation economically viable.

To avoid problems from burn-out and corrosion, which can require rig interventions costing $50 million on top of lost production, we developed MOBOs, or modules of boosting, where several pumps are clustered together to allow for some redundancy. The system has worked flawlessly since we installed it.

Offshore: How do you see the industry right now in Brazil, given the lack of new block leases for the five years up until 2013?

Stingl: Without the lease, for five years nobody has had access to these Libra hydrocarbons, but fortunately we had other opportunities to develop in the meantime, which has really helped us and given us time to learn how to operate efficiently in Brazil.

Offshore: Will Brazil have the resources to cope with the huge expansion of the industry over the coming decade?

Stingl: Offshore, we use 90% local content. But Brazil has the largest new discoveries in the world, and Petrobras is the largest deepwater operator, so they have so much work that the industry cannot train them quickly enough. We really have to be innovative on how we stretch people and train them and get them the skills that they need to mature more quickly.

Wood Mackenzie have been estimating those requirements, and are predicting a need for 10-15 FPSOs for the Libra area alone, and production rates could be1 MMb/d across hundreds of wells. When you think about them costing $100 million each, and that's just Libra, and Petrobras already has other developments on production now and expanding, its astounding the growth that's required for all these developments.

Brazil has a very mature industry today. They'll always be behind, but that's good in a way because there'll always be a demand for talent, and it brings steady growth, which is essential. This is a good, steady development program, and these are high-quality oil reserves, so there's a consistency that helps.