Despite the occasional setback – political and exploratory – the Black Sea continues to draw interest from international oil companies, including heavy hitters such as ExxonMobil, Total, Shell, and Repsol. 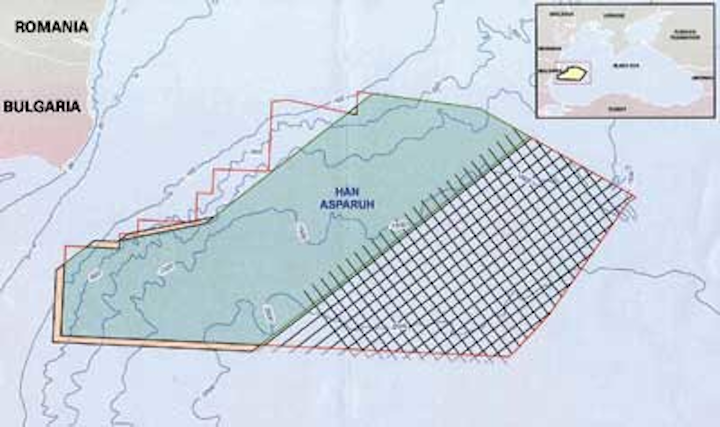 Despite the occasional setback – political and exploratory – the Black Sea continues to draw interest from international oil companies, including heavy hitters such as ExxonMobil, Total, Shell, and Repsol. Fewer than 100 offshore wells have been drilled in the Black Sea and, until recently, its deeper waters remained mostly unexamined by seismic surveys.

In efforts to counter a drop in onshore production while reducing their reliance on imports from Russia, countries that border the Black Sea have launched bid rounds and entered production-sharing agreements with operators. Following is a country-by-country look at some recent developments in the underexplored region.

In September, Ireland's Petroceltic International announced the successful tieback of the Kaliakra discovery well in the shallow-water Galata exploration block. The well, which reached flow test rates exceeding 12 MMcf/d, was drilled by theGSP Prometeu jackup and tied back to the existing Kaliakra pipeline.

Petroceltic earlier reported that the Kamchia-1 exploration well, also in the Galata concession, had been P&A'd after encountering sands with "sub-commercial gas saturations." The well was drilled by theGSP Prometeu to a depth of 2,887 ft (880 m).

Following the Kaliakra completion, Petroceltic mobilized theGSP Prometeu rig to Romania to drill two exploration wells on the Est Cobalcescu and Muridava concessions, in blocks 28 and 27, respectively. The Cobalcescu South-1 well, spudded at the end of August, is targeting two Miocene intervals that that the company says contain a combined 404 bcf of gas. The second well, Muridava-1, has multiple targets in the Eocene, Paleocene, and Creataceous formations with combined resources of 169 bcf. The Muridava concession includes the undeveloped Olimpiskaya discovery.

Petroceltic plans to drill four more exploration wells on the two blocks in 2014.

In late June 2013, OMV Petrom and partner ExxonMobil and Production Romania Ltd. (EMEPRL) announced the completion of a 3D seismic survey over the Neptun Deep block. At more than 6,000 sq km (2,316 sq mi), the survey was the largest recorded in the Black Sea.

The companies enlisted the Diamond Offshore semisubmersibleOcean Endeavor to resume exploration drilling on the block. The rig can drill in water depths up to 2,400 m (7,874 ft) and to a total drilling depth of 10,600 m (34,777 ft). ExxonMobil operates the drilling program for the deepwater section of the Neptun block.

Data from the seismic and drilling campaigns will help assess the size and commerciality of the 2012 Domino discovery and other potential prospects in Neptun Deep. Total costs for the exploration program, including appraisal drilling, could reach $1 billion.

In February 2012, OMV said the Domino exploration well encountered nearly 71 m (233 ft) of net gas pay and that the Neptun prospect could hold 1.5-3 tcf in reserves.

In late 2012, Canada's Sterling Resources announced a gas discovery at its Eugenia-1 exploration well in the Pelican block. The well, drilled in 55-m (180-ft) water depths to a total measured depth of 2,276 m (7,467 ft), encountered 22 m (72 ft) of gas pay concentrated in two Late Cretaceous intervals. The well turned up a further 20-m (66-ft) "zone of interest" within an Eocene limestone section, Sterling said. Eugenia-1 is just west of the Olimpiskaya discovery.

The announcement came just weeks after Sterling released results from an exploration well on the Ioana prospect in the Midia block. While the well encountered gas shows, initial results determined that the reservoir development was poorer than expected in the shallow-water area where the well was drilled and that further seismic and drilling would be required to appraise the larger Ioana structure east of the drill site. Sterling spudded the well in shallower, 91-m (299-ft) water depths because the only rig available at the time was theGSP Jupiter jackup, also used to drill Eugenia-1.

"The Ioana-1 location was defined by 2D seismic data, which has proved successful for the Ana and Doina discovery and appraisal wells, but the complexity of the formations encountered in the Ioana-1 well now suggest that 3D seismic might be needed for reservoir thickness predictions and further drilling on this structure," Sterling said.

Sterling Resources, through its Midia Resources SRL subsidiary, operates the Midia and Pelican blocks with 65% interest. Petro Ventures Europe holds 20% interest, while Gas Plus International has the remaining 15% stake. In late 2012, the company announced plans to sell its interest in a deepwater section of the Midia block to ExxonMobil and OMV Petrom for about $29 million; as of the close of 2Q 2013, the company was awaiting government approval for the farm-down, which it hoped to complete by the end of the year.

"This carve-out and sale of an area in deeper waters allows us to focus on the development and exploration of fields and prospects in shallower waters, where drilling and construction should be less expensive," said Sterling president and CEO Mike Azancot at the time of the announcement.

In September 2012, Turkish Petroleum Corp., or TPAO, announced a gas discovery at the Istransca-1 well in the Western Black Sea license AR/TPO/3920. The well was drilled in 85-m (279-ft) water depths to a total depth of 3,650 m (11,975 ft), recovering gas from Middle Miocene sandstones and proving, as TPAO noted, "the existence of hydrocarbons in the Turkish Black Sea outside the 12-mile territorial waters."

TPAO has reached agreements with international oil companies over the past few years to explore the Black Sea's greater depths. In 2010, Petrobras, TPAO, and ExxonMobil signed a partnership agreement to explore block 3922 (Sinop), where water depths average 2,200 m (7,218 ft). The partners drilled the Sinop-1 well that year with theLeiv Eiriksson semisub. Also in 2010, Chevron entered a partnership with TPAO to explore the deepwater block 3921. The initial exploratory well, Yassıhöyük-1, was unsuccessful.

In February 2013, the Turkish government announced that TPAO and Shell had signed a farm-in and joint operating agreement to explore the deepwater areas of license 3920, site of the shallow-water Istransca discovery. The agreement gives Shell a 50% interest and operatorship of early stage exploration activities, including acquisition of 1,500 sq km (579 sq mi) of 3D seismic and one exploration well over a three-year period, Shell said in a statement.

In June, Reuters reported that TPAO and ExxonMobil were discussing a partnership to explore deepwater in the western Black Sea.

In 2011, ExxonMobil reached an agreement with Rosneft to jointly develop oil and gas resources in the Russian sector of the Black Sea, with an initial focus on the Tuapse Trough, where Rosneft has identified around 70 prospective structures in water depths ranging from 1,000-2,000 m (3,281-6,562 ft). A similar agreement with Chevron reportedly fell through.

As recently as last June, ExxonMobil had agreed to bear the brunt of the estimated $3.2 billion in initial exploration costs for the company's joint ventures with Rosneft in the Black Sea and Kara Sea, in Russia's far north. Drilling in the Tuapse area is scheduled to begin next year, following analysis of seismic data gathered in 2013.

In September, Ukraine signed an agreement with ExxonMobil, Shell, and OMV Petrom to draw up a production-sharing contract to explore the Skifska prospect. At the signing ceremony in New York, Ukraine Energy Minister Eduard Stavytskyi said "practical works" such as seismic gathering could get under way before the end of the year. The agreement includes an up-front payment of more than $300 million and a commitment to spend another $400 million on seismic acquisition and two deepwater wells.