The power-from-shore (PFS) study ABB is performing for the Utsira High area in the Norwegian sector of the North Sea is an important step toward establishment of offshore grids capable of supplying power to multiple platforms or fields. 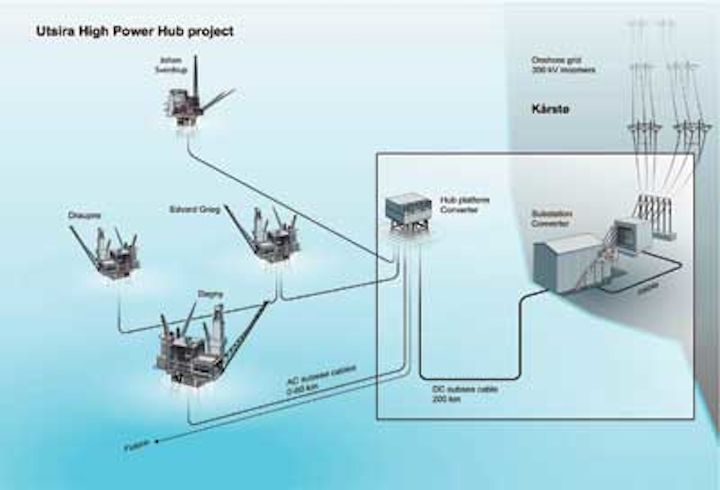 The power-from-shore (PFS) study ABB is performing for the Utsira High area in the Norwegian sector of the North Sea is an important step toward establishment of offshore grids capable of supplying power to multiple platforms or fields.

Although much of the pioneering work for powering offshore oil and gas fields from shore has been prompted by the Norwegian government's tax on carbon dioxide (CO2) emissions generated by offshore installations, it is now the technical and operational benefits of the technology that are generating interest in PFS around the world.

In the Norwegian sector, PFS is in use on BP's Valhall and Statoil's Troll Gas and Gjøa fields in the North Sea. It is being implemented in Eni's Goliat development in the Barents Sea and is part of the plans for Total's Martin Linge in the North Sea. These are all projects in which ABB has been involved. Having previously performed a feasibility study, the contractor is now performing a more detailed study for a PFS grid in the Utsira High region of the North Sea serving four fields – Lundin's Edvard Grieg, Det norske oljeselskap's Ivara Aasen (previously known as Draupne), and Statoil's Dagny and Johan Sverdrup.

The work is part of a study by Statoil on behalf of the four sets of licensees at the request of the Ministry of Petroleum and Energy. The Norwegian government is keen to encourage the use of PFS – all proposed developments are obliged to evaluate it.

It is particularly keen where Utsira High is concerned due to the substantial power needs, favorable distances from shore, and relatively shallow water depths. A recent study by the Norwegian Petroleum Directorate of a PFS grid in the Utsira High region concluded that it was a competitive option compared with local generation. However, the government has made it clear that, at the end of the day, it is up to the licensees to make the decision on commercial grounds.

The basic concept for Utsira High is for an offshore distribution hub platform located near Johan Sverdrup to receive DC power from shore, and convert it to AC form for onward transmission to the various field platforms. The work performed by ABB, which comprises technical studies for the converter system, is due to be submitted at the end of this year.

"The intention is to create a framework for potentially setting up a company or partnership to own and operate the facilities that will feed the receiving platforms with power," Statoil stated when the study was launched.

ABB's scope covers all the electrical facilities, including the land station and connection to the onshore grid, the topsides of the distribution platform, the reception and distribution facilities on the consumer platforms, and the subsea transmission.

The exact power requirement is not known yet, but for the purpose of the study has been specified in the range of 150-300 MW. This is much greater than any of the other PFS projects to date – Valhall's power need is 78 MW, Gjøa's 40 MW and Goliat's 75 MW. Moreover, if a PFS scheme is implemented, it will be the first time high-voltage (HV) power is distributed at sea to multiple oil and gas operations.

Despite presenting some new features in an offshore context, the Utsira High scheme does not require significant technology development, according to Tor-Eivind Moen, product solutions center manager for power-from-shore and subsea electrification at ABB Oil & Gas.

The stepout, some 200 km (124 mi) to the hub platform, is not the longest – that honor goes to Valhall, which is supplied through a 292-km (181-mi) DC cable. The longest AC cable connection in the Utsira High scheme is about 60 km (37 mi), from the hub platform to Dagny – less than the 100 km or so AC cables developed by ABB for Gjøa and Goliat. Nor does Utsira High involve the complications of delivering power to a floating installation, since all the platforms will be bottom-founded installations in waters of no more than 110 m (361 ft). By comparison, both Gjøa and Goliat are floaters in water depths of 350-400 m (1,148-1,312 ft), and developing the dynamic part of the subsea cable for these projects is a demanding technology challenge.

Of the Utsira High developments, Johan Sverdrup will have the largest power requirement. It is also closest to land and will remain in production the longest. The hub platform will therefore be located close to it – possibly just five or so kilometers (3 mi±) away or even at the Johan Sverdrup field center, bridge-linked to the main production platform. In the latter case, AC power could be delivered to the production platform over the bridge-link, removing the need for a subsea cable, and the two platforms could share utilities and accommodation facilities. There will also be a need for power distribution to the other installations on Johan Sverdrup.

A 20-km (12.4-mi) AC cable will carry power to Edvard Grieg, where final processing of production from the nearby Ivar Aasen field will also take place. It would, therefore, make sense for power for Draupne to be supplied via Edvard Grieg rather than each platform being supplied by separate AC cables from the hub platform.

On the hub platform, the main module will be the e-house, the unit in which the DC power is converted to AC. This will be a large and complex module, housing an HVDC unit, plus transformers and switchgear. However, the design task is simplified as no hydrocarbons will pass over the platform, so, although high standards still apply, HSE provisions related to the presence of hydrocarbons, such as explosion-proof requirements, do not apply, Moen points out.

ABB can bring to the Utsira High project the experience it has accumulated in designing facilities for the offshore wind-power market. Some wind-farms are far from shore and involve platforms gathering and transmitting high levels of DC power – to 400 MW and more.

Another complexity in the Utsira High project, though not one over which ABB has any influence, is that the four sets of licensees are working to different schedules. The plan for development and operation (PDO) for Edvard Grieg was approved in June and the field is due onstream in late 2015. Det norske and Statoil aim to submit PDOs for Ivar Aasen and Dagny respectively before year-end, with a late 2016/early 2017 production start in view. Johan Sverdrup, which promises to be a giant discovery, is still undergoing appraisal, though start-up in late 2018 has been mooted.

Edvard Grieg, Dagny, and Draupne will be prepared to start production with local power generation by gas turbine, but the respective platforms will be further prepared for an eventual switch to PFS.

It will be interesting to see if the possibilities of a PFS grid change the assessments made by the individual licenses on a stand-alone basis. In preparing their developments, both Lundin, for Edvard Grieg, and Statoil, for Dagny, concluded that local power generation was preferable to PFS. However, a PFS grid should present much better economy given that many of the costs will be shared.

Supplying power directly in AC form saves the cost of converting it from DC before it is consumed. However, power level and distance is a limiting factor, though the limit has been pushed back considerably in previous projects. Not so long ago, 40-60 km (25-37 mi) was viewed as the limit for the subsea transmission of AC energy, but in recent projects the distance has been considerably extended, with 100-km (62 mi) cables being developed by ABB for both Gjøa and Goliat.

For its Martin Linge development, Total aims to take a further leap forward, transmitting AC power of 55 MW over a distance of 170 km (105 mi). ABB has proposed a solution.

While the early interest in PFS in Norway was driven by environmental tax considerations, there are substantial economic and technical advantages to running offshore installations purely on electricity, says Håvard Devold, group vice president, oil, gas and petrochemicals, ABB Ltd. Gas and diesel turbines are relatively inefficient energy converters in an offshore context, are relatively heavy and space-consuming, and require a lot of maintenance.

Even without opting for PFS, there are significant benefits when operating all equipment on electricity, such as using direct electric drive motors in compression systems, Devold says.

An increasing understanding of the potential benefits of PFS has sparked growing interest both in Norway and elsewhere. Numerous operators in the Norwegian sector have performed PFS studies with ABB's participation for multi-field operations where production is expected to continue for many years, and increasing amounts of power are needed to extract the hydrocarbons from the reservoir and treat them prior to export. These include Statoil's Tampen area in the North Sea, which embraces the Statfjord, Gullfaks, and Snorre fields; its Halten Bank operations in the Norwegian Sea, including the Åsgard, Kristin, and Heidrun fields; and ConocoPhillips' Ekofisk area in the southern Norwegian North Sea, which takes in Eldfisk, Embla, and Tor.

Elsewhere ABB has done PFS studies related to offshore oil and gas production in Malaysia (Petronas), Qatar (Qatar Petroleum), UAE (Adnoc), Saudi Arabia (Aramco), Brazil (Petrobras), Russia, Canada, Egypt, and the US. When making such evaluations, due value has to be attributed to elements such as the CO2 and NOx emissions savings, the HSE benefits, and the amount of gas no longer needed as fuel purposes becomes available for sale.

Norway's recent exploration success in the Barents Sea has raised the question of whether PFS could be successfully deployed in these waters. The technology could also be applicable in the Arctic as part of a subsea solution for producing fields in ice-covered areas where it would be impossible to use surface installations.

Also relevant is the powering of subsea processing operations, whether from shore or a nearby platform. Many companies see development of this technology as vital in the battle to maximize recovery. Floating LNG vessels also represent a potential market segment, with a power requirement of the order of 150-200 MW, says Devold.

"The good news for us is that so many people, companies, projects, governments, and NGOs are now thinking about these applications at a feasibility level, so that acceptance of the technology is maturing and the political will to adopt it is also growing," says Moen.