Operators and drilling contractors are ratcheting up exploration and production activities, which are soon expected to surpass the levels seen prior to the accident. 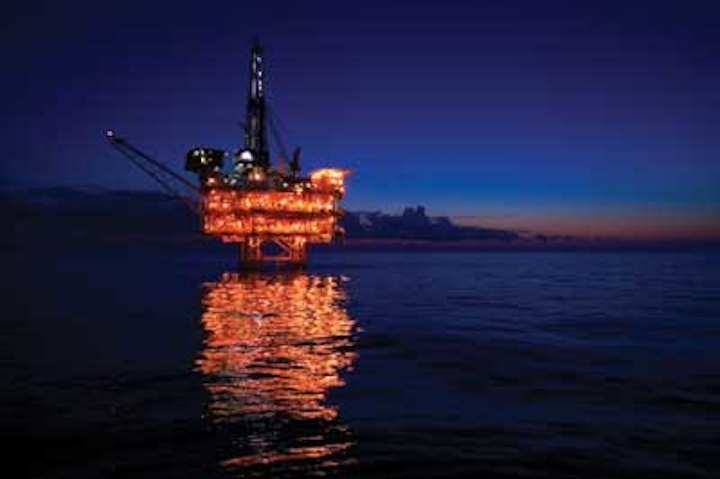 After a period of doubt and uncertainty following the Macondo oil spill, 2012 is proving to be a year of cautious optimism for the oil and gas industry in the Gulf of Mexico.

Operators and drilling contractors are ratcheting up exploration and production activities, which are soon expected to surpass the levels seen prior to the accident.

The continued high demand for oil is driving the resurgence, in tandem with oil prices that remain near $100/bbl.

But the pace of permitting remains mixed. Both shallow-water and deepwater drilling have been held up as the newly formed Bureau of Ocean Energy Management (BOEM) gradually issues new permits.

The drilling permit situation is slowly improving on an absolute number/month basis, but the average rate of permit issuance is still below averages seen prior to the spill. Business group Greater New Orleans (GNO) Inc. found an average of three permits a month were approved from November 2011 to January 2012, compared with nearly six a month in the year before the spill.

In late March, GNO released the 28th Gulf Permit Index (GPI+). The findings generally showed that, through mid-March, approvals for deepwater wells (exploratory and development) were up over the levels of 4Q 2011, but lagging behind pre-Macondo approval rates. The findings also showed that approvals for shallow-water wells have been quite volatile, but are hovering around levels seen in the year prior to Macondo.

The index includes data on deep and shallow-water permit issuance taken from the Bureau of Safety and Environmental Enforcement (BSEE) as well as data on exploration and development plans obtained from the BOEM.

This past February, the number of deepwater permits issued rose sharply, exceeding the monthly average observed in the year prior to the Macondo oil spill. Twenty-two permits were issued in February, representing a 16-permit – or 279% – increase from the average of six permits per month. This number also represents a 15-permit – or 214% – increase from the historical average of seven permits per month over the past three years.

The next month, deepwater permit issuance lagged the monthly average observed in the year prior to the oil spill. Only five deepwater permits were issued in March 2012, representing a one-permit – or 17% – reduction from the average of six permits per month. This number also represents a two-permit – or 29% – reduction from the historical average of seven permits per month over the past three years.

The deepwater rig fleet is on its way to reaching pre-Macondo drilling levels, and is expected to reach that point either by the end of this year or sometime in 2013. Deepwater drilling activity has increased steadily, if slowly, since the Marine Well Containment Co. and the Helix Well Containment Group systems became available for the industry.

Those figures were expected to continue increasing during the year as nine deepwater rigs, including eight newbuild semis and drillships, are expected to begin operating in the GoM during 2012 and 2013. In fact, during the first quarter of 2012, five rigs were already en route to the Gulf, including theNoble Globetrotter I, Pacific Santa Ana, West Capricorn, Ensco 8505, and Stena Forth. Additional rigs scheduled to journey to the Gulf are Dragon Quest, Atwood Condor, Ensco 8506, and Noble Globetrotter II.

With these nine rigs plus the 15 semisubmersibles and nine drillships working at the beginning of February of this year, the deepwater fleet could see as many as 33 deepwater units working by early to mid-2013. Additionally, there are still a few deepwater rigs that could return to the Gulf from international areas, as well as a few rigs still in the Gulf but currently without contracts.

As the industry returns to normal, individual drilling contractors are seeing their rigs move from the idle column to the working column. Noble Drilling, for example, was able to return all five of its active deepwater rigs in the Gulf to their full operating day rates during 2011.

A recent analysis by EIC Consult, the market research and consultancy arm of the Energy Industries Council, predicts that deepwater drilling in the Gulf of Mexico is on its way toward "regaining the momentum" it had before the Macondo incident.

The report indicates that there are 5,981 active leases in the Gulf, and following the issuance of the new permitting regulations, more than 130 new well permits have been granted, mostly in waters greater than 5,000 ft (1,500 m). Plus, there are many more applications pending. 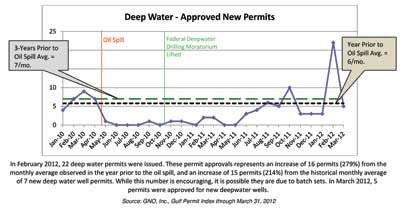 The fields produce from the Lower Tertiary. This development originally was scheduled to come onstream in early 2010; however, the deepwater drilling moratorium delayed the drilling of additional development wells. A problem with the riser system resulted in additional delays.

Other projects scheduled to come online during 2012 include Galapagos, comprised of the Isabela (BP), Santa Cruz, and Santiago fields (Noble Energy) in about 6,500 ft (1,981 m) of water. Anadarko is scheduling three field start ups this year: its Caesar field, West Tonga, and Cheyenne East (in 9,100 ft, or 2,774 m, of water).

In fact, Anadarko recently reported that first production is already flowing from the deepwater Caesar/Tonga development. The company expects production to reach about 45,000 boe/d from the first three subsea wells, with a fourth well expected to be completed later this year in the Phase 1 development.

The Caesar/Tonga development is using the Constitution spar floating production facility, and represents the first application in the GoM of steel lazy-wave riser technology. The development is in Green Canyon blocks 683, 726, 727, and 770.

Among the expected 2013 starts is the Knotty Head field, where Nexen is the operator. During 2014, Anadarko plans to begin production from its Lucius field while Hess is anticipating its Tubular Bells field to come onstream. Chevron scheduled its St. Malo and Jack fields for production start up in this year as well.

The successful penetration of high-quality, oil-bearing sands confirmed the continuity of the reservoir, and validated the company's geologic model and initial resource estimate of more than 200 MMbbl of oil, says Bob Daniels, senior VP, Worldwide Exploration for Anadarko. The company plans to immediately side track the well to evaluate the downdip extent of the field, and plans to initiate pre-FEED (front-end engineering and design) activities to prepare for sanctioning a development project.

While the jackup market was not hit as hard as the deepwater fleet, shallow-water drilling contractors still experienced a decrease in activity following the Macondo blowout. Numbers have been rising of late. On Feb. 1, 2012, 35 jackups were working out of a total fleet of 73 units. However, 28 of those 73 rigs were cold-stacked and not marketed for contract, leaving an effective jackup fleet of 45 rigs. 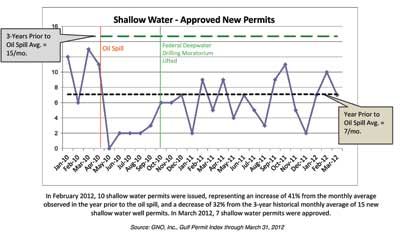 Observers note that shallow-water operators went from a "de facto" drilling moratorium, where permits were being issued at a very slow pace, to a regulatory environment in which drilling permits are beginning to increase.

One of the leading shallow-water operators, McMoRan Exploration Co., recently announced that it is continuing to flow test the Davy Jones 1 well in South Marsh Island block 230, offshore Louisiana. The company reports that initial attempts to perforate and flow test the Wilcox F sand met with a hydraulic equipment malfunction, so McMoRan elected to move up the hole to test another zone using electric-line perforating equipment. This test on the Wilcox D sand get a positive pressure response, and the company plans to perforate the Wilcox C sand and comingle the zones. Future plans for the F sands are being considered.

Elsewhere in the GoM, McMoRan has reached a TD of 34,162 ft (10,413 m) in its Lafitte exploration well on Eugene Island block 223 in 140 ft (43 m) of water. The company logged two potential new hydrocarbon bearing zones in the Upper Eocene section of the well with an aggregate thickness of approximately 65 net ft (20 m). These new Upper Eocene sands correlate to the Jackson and Yegua sections found onshore Louisiana. These are the first hydrocarbon bearing Upper Eocene sands encountered either on the GoM shelf or in the deepwater offshore Louisiana.

Western Gulf Lease Sale 218, the first offshore U.S. sale since the Macondo blowout, was held this past December and attracted what is reckoned to be the highest single bid in any Western Gulf sale. This particular bid also nearly matched a single high bid in a recent Central Gulf Lease Sale, which typically attracts significantly higher bids. ConocoPhillips offered up $103 million for Keathley Canyon block 95, which represented about two-thirds of the operator's total high bids of $157.8 million for 75 tracts, and about 30% of all high bids of $337.7 million submitted during the sale.

Keathley Canyon block 95 attracted seven bids (ConocoPhillips, BP, Hess, Maersk, Shell, Chevron, and Ecopetrol) ranging from $11.5 million to $103 million. Chevron submitted the second highest bid of $84 million while Maersk offered the lowest bid of $11.5 million. BP submitted a bid of nearly $79 million for the block. The block is about 20 mi (32 km) from BP's Tiber discovery in Keathley Canyon block 102 announced in 2009, and estimated at that time to contain more than 3 Bbbl of oil from the Lower Tertiary, one of the Gulf's most productive deepwater trends. Partners in that block when the discovery was made were BP, Petrobras, and ConocoPhillips. The Tiber discovery was drilled by Transocean'sDeepwater Horizon semisubmersible.

The next proposed OCS lease sale schedule covering the five years from 2012-2017 includes a total of 15 sales, 12 of which are in the Gulf of Mexico. These include five each in the Western and Central Gulf, and two proposed sales in the Eastern Gulf that are not currently under Congressional moratorium.