In a year that has seen Petrobras CEO Maria das Graças Silva Foster opt for a more "realistic" approach to the company's forecasts by cutting production targets by 11%, Chevron and Transocean hindered by the courts, and as ExxonMobil and Shell look to divest some of their assets in the region, it appears that 2013 cannot come soon enough for Brazil's offshore oil and gas industry. 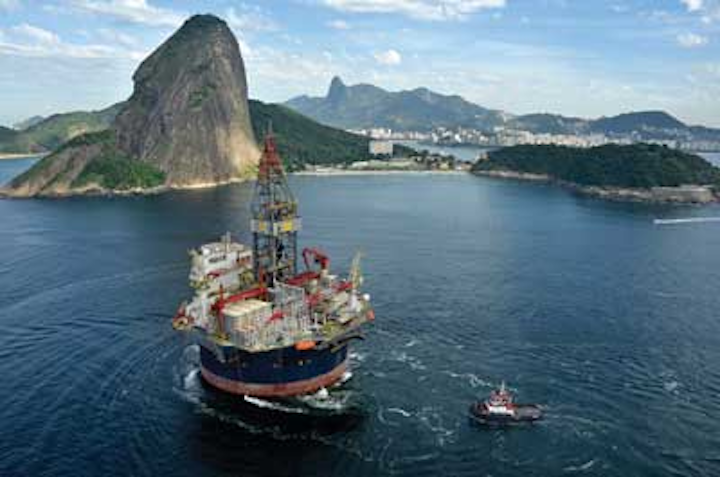 In a year that has seen Petrobras CEO Maria das Graças Silva Foster opt for a more "realistic" approach to the company's forecasts by cutting production targets by 11%, Chevron and Transocean hindered by the courts, and as ExxonMobil and Shell look to divest some of their assets in the region, it appears that 2013 cannot come soon enough for Brazil's offshore oil and gas industry.

One highlight in 2012 came in September during the Rio Oil and Gas show when energy minister Edison Lobão announced that the 11th bid round will be held in May 2013, followed by the first round of presalt licensing in November. That would mark six years since the announcement of the huge, ultra-deepwater discoveries, but the government's ever-present control over the industry could still scupper the plans.

The Brazilian Congress continues to debate the destination of the royalties the auction will generate, which has delayed progress since the 10th bid round in 2008. With an estimated $1 billion set to be generated by the 11th and presalt rounds, states outside of Rio de Janeiro and Rio Grande do Sul are desperate to see their share of the profits increased.

Meanwhile, President Dilma Rousseff is keen to pour the very same financial resources into education, while Rio de Janeiro Governor Sergio Cabral claims that any adjustment in the way the profits are shared could put the city's preparations for the 2016 Olympic Games in jeopardy.

Ideli Salvatti, minister of internal relations, was quick to refute the suggestion that such wrangling could hold up the next auction. "Next year we will have, without a doubt, the necessary tools to expand the exploration [of oil and natural gas]," she said, while reassuring the industry that there would be no renegotiation of existing contracts.

Magda Chambriard, director-general of the ANP, which is ultimately responsible for the licensing format, was less convinced that the schedule was still on course. "The preamble to any auction taking place is the resolving of the royalty distribution question," she said. "For the 11th round to take place in May, that decision has to be made this year because the ANP needs at least 120 days to prepare the auction."

She also stated that despite the National Energy Council's (CNPE) approval of 174 blocks for auction (half onshore, half offshore), likely to be in the so-called "Equatorial margin" farther north than the presalt fields, not all will necessarily be up for offer. "We have been aware of environmental disputes over some blocks for a while now, and it is possible that the ANP, along with IBAMA [environmental group], withdraw some of the blocks in question."

The new bid round will see the laws changed to guarantee Petrobras a minimum of 30% of all rights sold, while a percentage of all output will have to be given to the government rather than made available to the market. The announcement of exactly which blocks will be up for tender has yet to be made, because of the ongoing discussions between the ANP and IBAMA.

For companies of all sizes and positions along the supply chain, the promise of the presalt region's predicted yield of about 100 Bbbl of recoverable crude remains strong enough to make them want to maintain their foothold. Shell's divesting of some older but productive wells looks to pave the way for bids on the fresh blocks. However, any further delays could see Shell concentrate its activities elsewhere, with damaging consequences for Brazil's still-incipient industry. ExxonMobil, which has operated in Brazil for a century, relinquished its only exploration lease in the country, block BS-M-22, 350 km (217 mi) south of Rio, after disappointing drilling results.

Environmental concerns raised by the inherent difficulties of drilling at sea and depths of 6 km (19,685 ft) were intensified following the spill at Chevron's Frade field 370 km (230 mi) off the coast of Rio in 2011.

There remain plenty of reasons for optimism. Petrobras has been bullish with its investments, committing $5.6 billion in spending, which kicked off with the signing of a $1 billion agreement with GE for subsea wellhead systems. The building of FPSO replicates is also well under way, while Sevan Drilling has two newbuild rigs due for delivery at the end of 2013 and the beginning of 2014. Transocean has signed a 10-year deal with Shell to build four new ultra-deepwater drillships.

"Petrobras has been preparing for the expansion of the industry for a long time," said a spokesman. "We have a highly qualified supply chain capable of supplying goods and services to the necessary timeframe, price, and specification. The 2012-2016 Business and Management Plan for $236.5 billion is attracting the attentions of foreign manufacturers, encouraging them to set up in Brazil and helping the national supply market cope with Petrobras' needs."

The pause in exploration in 2012 has also provided an opportunity for companies to prepare for the demands of the next round of bidding, which looks set to hike local content requirements up to about a 60% minimum. The average successful bid back in 2008 was for local content as high as 80%, according to ANP figures. As the industry has expanded, so has the diversity of trained workers. For its part, Petrobras is training staff across 185 different specializations to add to the 90,000 employees already trained.

As Shell's Brazil president Andre Araujo has suggested, the initial negative perception of demands for local content from international companies has been largely reversed. It is now acknowledged that, to keep the industry sustainable, Brazil needs to become a supplier – not just internally, but also to the world.