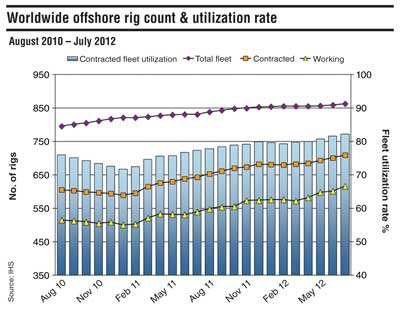 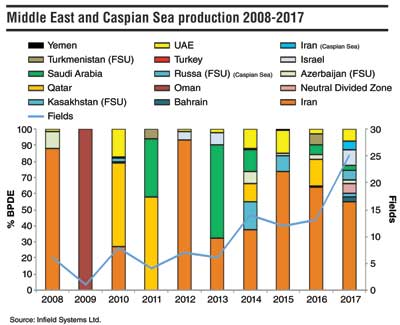 This month Infield Systems focuses on Middle East and Caspian Sea production and expected field developments to 2017. The previous five years have seen this region dominated by Iran, which has held 67% of the region's production additions and 75% of total new field reserves entering the market. During this time 26 fields have commenced production within the region, led by the multi-phase South Pars. Significant production has also been brought onstream offshore Qatar, on the Qatar North field, and on the Karan Gas and Guneshli Deep developments offshore Saudi Arabia and Azerbaijan respectively. From 2013-2017 Infield Systems expects more countries to bring fields onstream. In 2017, 10 countries are expected to commence production on new fields. As a result of this increasing diversity of the region's production, and the large spike caused by Phase 2 of Saudi Arabia's Manifa field in 2013, Infield Systems expects Iran's respective share of regional production to decrease to 51%. Infield Systems expects 70 fields to enter production in the next five years. National oil companies and their subsidiaries are expected to remain the dominant force, and hold 79% of new production additions during the 2013-2017 timeframe. The largest production additions are expected to be from the National Oil Co. of Iran, Saudi Aramco, and Qatar Petroleum. However, Infield Systems also expects some of the key field developments within the period to be brought onstream by consortiums, most notably the North Caspian Operating Co., which is developing the giant Kashagan field offshore Kazakhstan.
– Catarina Podevyn, Analyst, Infield Systems Ltd.