Global expenditure on floating production systems (FPS) will exceed $90 billion over the next five years, according to analysts Douglas Westwood. 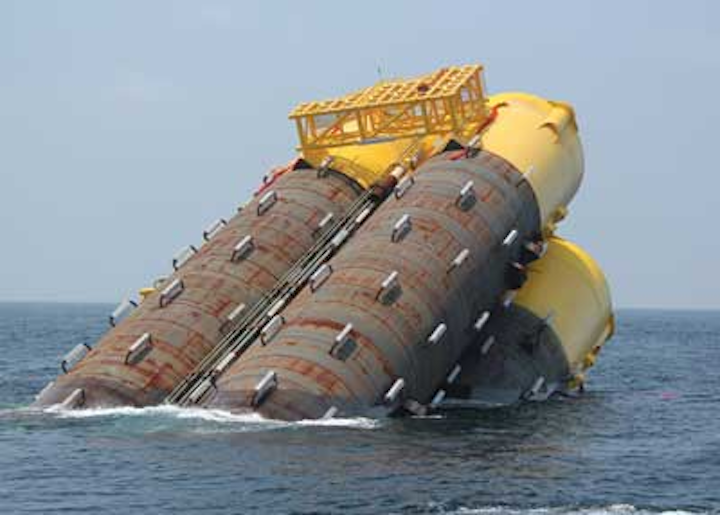 Global expenditure on floating production systems (FPS) will exceed $90 billion over the next five years, according to analysts Douglas Westwood. Their 2013-17 market forecast also foresees construction of 121 floating production units, a 37% increase on the preceding five-year period. Deepwater will account for 63% of the global FPS spend, with Latin America (chiefly Brazil) accounting for 29% of the new installations and 37% of projected capex. Asia, followed by Africa and Western Europe should take up much of the remaining investment, with new FPSOs (94) dominating the sector. However, financing remains difficult for contractors in the FPSO leasing sector and for smaller E&P companies planning projects, due to the debt crisis in Europe.

Shell has started exploration drilling offshore Alaska following a series of safety/environmental measures. The company aimed to drill top holes of two wells on the Sivuliq prospect, 20 mi (32 km) out in the Beaufort Sea, and on the Berger prospect 70 mi (112 km) offshore in the Chukchi Sea, re-entering both when the drilling season re-opens next year.

Pemex has discovered oil in the deepwater Supremus prospect, 250 km (155 mi) offshore Tamaulipas in the Gulf of Mexico. The location is just less than 40 km (25 mi) from the Mexican/US maritime boundary. Reserves could be in the range 75-125 MMbbl.

The CX-15 buoyant tower for BPZ Energy's Corvina field offshore Peru has been installed 1 mi (1.7 km) from the CX-11 platform, in 175 ft (53 m) of water. The structures were due to be connected via a series of subsea pipelines. The semisubmersible transport vesselOsprey delivered the topsides and hull components to the offshore site and was also used for the installation. The hull was initially floated off in a horizontal position then upended via controlled flooding of its lower cavities. More ballast was added prior to mating with the topsides – positioned on a cantilever structure – with the combined hull/topsides subsequently undergoing a wet tow to the Corvina location. Finally, the entire structure was set into the seabed using the integral suction foundation.

South Atlantic Holding, a joint venture between Statoil and Sinochem, has contracted WorleyParsons to provide engineering, procurement, and management support for the Peregrino II field development in the Campos basin off Brazil. Planned facilities comprise a wellhead platform (WHP C) with integrated drilling facilities and a living quarter module, to be connected to the field's existing FPSO.

Petrobras has started oil production from a well in the presalt Campos basin through the FPSOCidade de Anchieta. A further six producers and three injector wells should be in place by February, boosting production to 100,000 b/d. The floater is stationed over the Baleia Azul field offshore Espirito Santo state, and will also draw production from the Jubarte and Pirambu fields.

In the ultra-deepwater Santos basin, the company has proved gas and condensate in the Jupiter Nordeste structure, 7.5 km (4.6 mi) from the Jupiter discovery well.

BP has signed production sharing contracts for three deepwater exploration blocks offshore Uruguay, awarded under the country's second offshore licensing round. These are blocks 11 and 12 in the Pelotas basin, and block 6 in the Punta del Este basin, both southeast of the capital Montevideo and in water depths ranging from 50-2,000 m (164-6,562 ft). BP aims to start 2D and 3D preparatory studies next year under the initial three-year exploratory phase.

Falkland Oil & Gas has discovered gas in the Loligo structure in the northern part of the offshore East Falkland basin. Results from the well, drilled by the semisubLeiv Eirkisson, also demonstrate that Loligo is a viable stratigraphic trap. The rig has since spudded the Scotia exploration well for the same operator, 315 km (196 mi) east of the Falkland Islands capital Stanley, targeting a mid-Cretaceous fan prospect.

Total is set to take 40-50% stakes in three exploration licenses held by Oil Search offshore Papua New Guinea. The blocks in licenses PPL 10, 234, and 244 are in the Gulf of Papua region in waters up to 100 m (328 ft) deep. Oil Search will retain the operating role during the exploration phase, which should start with two wells early next year.

Pan Pacific Petroleum has agreed to sell its interests in the Carnarvon basin offshore Western Australia to Australian small-field specialist Hydra Energy. The interests include production from the North Herald and South Pepper oil fields and numerous undeveloped oil and gas accumulations.

Eni has discovered oil, gas and condensate in the Tano basin, 50 km (31 mi) offshore Ghana. The Sankofa East-IX well was drilled on the Offshore Cape Three Points block in 825 m (2,706 ft) of water, with hydrocarbons encountered in Cretaceous sandstones, including 76 m (249 ft) of gross oil pay. The oil does not appear to be connected to the gas/condensate either at Sankofa or the nearby Gye Nyame structures.

Ophir Energy has achieved a sixth gas find in block R offshore Equatorial Guinea. The semisubEirik Raude drilled the Fortuna West-1 (R6) well in 1,758 m (5,767 ft) of water, encountering a 72-m (236-ft) gas-bearing column in late Miocene sands on the western part of the Fortuna complex. Ophir estimates recoverable reserves at 397 bcf, pushing the total discovered so far on the block to 3 tcf, with other prospects still to be tested.

CABGOC has contracted Saipem to engineer and install pipelines and associated trenches for the Congo River Crossing pipeline project offshore Angola and the Democratic Republic of Congo. The scope includes three subsea pipelines, 20 and 22 in. (51 and 56 cm) in diameter, with a total length of 110 km (68 mi), in water depths up to 117 m (384 ft). TheCastoro 7 was due to start marine activities in the current quarter.

In Angolan deepwater block 16, Maersk Oil has proved oil with the Caporolo-1 well, drilled by the semisubPride South Pacific as a step-out on a structure 13 km (7.5 mi) from the Chissonga discovery. The location is in the western part of the block, 300 km (186 mi) northwest of Luanda. Maersk plans to appraise the new find and to drill more exploratory wells on this block and on block 23.

UK-based consultants Penspen is due to complete a feasibility study this month for a gas export system from fields offshore Azerbaijan. The Azerbaijan-Georgia-Romania-Hungary Natural Gas Interconnector (AGRI) project would involve construction of a linear east/west pipelines/LNG chain, with new liquefaction and regasification terminals built on the Georgian and Romanian Black Sea coasts. Participants include Azeri state oil company SOCAR.

Lukoil has contracted Saipem to transport and install three platforms and a living quarter module for the Vladimir Filanovsky development in the Russian sector. The facilities are under construction at various shipyards and will be installed in phases during spring-summer 2013 and 2014.

In the Kazakh sector, the Saipem and Keppel Kazakhstan joint venture Ersai Caspian Contractor LLC is constructing a newbuild jackup for Teniz Burgylau LLP. This will be the first-ever jackup built in the country, and will be equipped to drill to subsurface depths of up to 20,000 ft (6,096 m). Final assembly and commissioning will be performed at the Ersai Kuryk yard with delivery scheduled for early 2015.

Saudi Aramco has discovered gas in the Red Sea, northwest of Dhuba port, according to the Saudi Press Agency. During a test, the Al-Shoor well flowed a total of 15.2 MMcf/d from subsurface depths in the range 17,275-17,700 ft (5,265-5,395 m). Aramco reportedly plans further drilling on the field.

Statoil has contracted KBR for pre-front end engineering and design studies for an LNG facility in Tanzania. Statoil is assessing the viability of a plan to export gas from its recent deepwater discoveries in the region.

Total has agreed to take a 40% stake in a production sharing contract operated by Petronas offshore Mozambique. This covers blocks in area 3 and 6 in the southern Rovuma basin, in water depths to 2,500 m (8,202 ft). The company sees strong oil prospectivity in this part of the basin – the north, to date, has proven mainly gas-prone.

CPHL (Cambodia) Co., an associate of Mirach Energy, has commissioned an environmental impact assessment for a proposed drilling campaign on Cambodia's offshore block D. The report, due to be completed next spring, will be submitted to the country's Ministry of Environment.

Pearl Oil (Amata) has contracted Clough to build, transport, and install a wellhead processing platform for the Manora oil field development in the G1/48 concession in the Gulf of Thailand. Clough will perform the work jointly with TL Offshore SDN Berhad – the scope includes hookup and laying of two 2-km (1.25-mi) pipelines in 44 m (144 ft) water depth. First oil is slated for 2014, building to a peak of 15,000 b/d.

Roc Oil has discovered a new oil pool within the WZ6-12 and WZ12-8 West oil field development areas in the Beibu Gulf offshore China. The jackupHai Yang Shi You 931 encountered a total of 59 m (193 ft) net oil pay in the Wezhou formation and in shallower reservoirs while drilling the WZ6-12N-1 well in 30 m (98 ft) of water. The development facilities incorporate spare capacity to tie in new oil zones uncovered during drilling.

Lundin Petroleum has achieved a fourth gas discovery at the SB303 block offshore Sabah, Malaysia. The jackupWest Courageous drilled the vertical Berangan-1 well, intersecting a gross gas column of over 165 m (541 ft) in Miocene sands. The four fields found to date on the block could form the basis for a gas-cluster development.