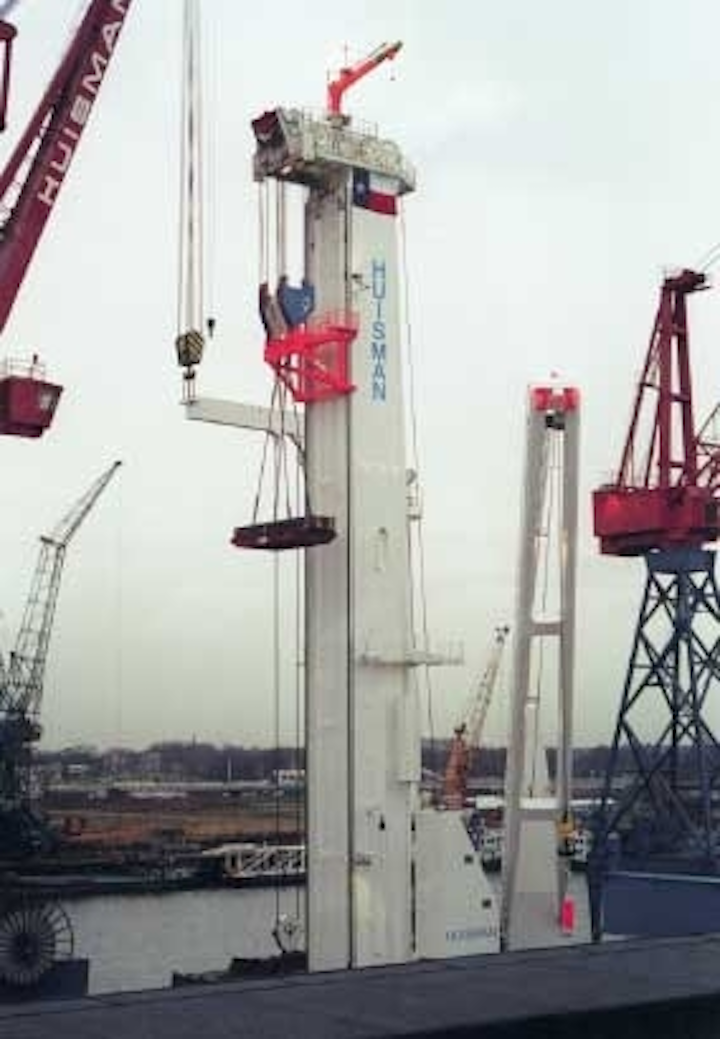 With all of the innovations in the oil industry over the years, one thing has remained relatively constant -the open lattice derrick. This design has become a symbol of the oil industry. While old habits die hard, Huisman-Itrec has set out to re-define the way the industry looks at a drilling tower. - Huisman-Itrec's new multi-purpose tower will be installed on the Cal Dive Q4000 well intervention vessel.

Company Chairman Joop Roodenburg said his new design keeps all of the functional components of the traditional drilling derrick, but moves them inside a box girder. This makes a dramatic change in the profile of the rig and, according to Roodenburg, offers a wide range of advantages.

For one thing, the girder design eliminates the V-door. Rather than guiding pipe and equipment through this limited space for access to the topdrive (power swivel), the open tower design offers free access from three sides. Not only does this make it easier to rack and run multiple joins of tubulars, it also frees up space on the deck.

One of the main challenges in installing subsea equipment is accessing the drill floor. From that point of view, this new design offers a real advantage for a construction and intervention vessel. In fact, the first of these multi-purpose towers (MPT) will be installed on Cal Dive's new Q4000 vessel, due out later this year (see related story in this issue).

All of the essential components of a traditional drilling rig are still present in the MPT, Roodenburg said, but many of these have been redesigned for greater efficiency and then moved inside the protective cover of the box girder.

Active and passive heave compensation is provided by equipment enclosed in the tower. The drawworks are isolated in their own compartment behind the tower and the only parts of the system that are exposed to weather are the crown and traveling blocks.

Another interesting aspect to this design is the modularity of the components. Because much of the equipment is enclosed inside the tower the MPT can be shipped in distinct modules. These can be assembled elsewhere or the full tower can be assembled by Huisman and shipped as one unit.

The system includes the mast structure with an integral crown block, the drawworks and controls, a splittable traveling block, and passive and active heave compensation systems.

In an effort to improve running time efficiency, the MPT is equipped with a hoist tackle system that features a splittible traveling block. The traveling block includes a main block, with two sheaves and four to six detachable single sheave blocks. With all four blocks running the traveling block has a full 12 falls (16 falls, if it is a six-block model) for maximum load capability.

When the block is not operating at maximum load, these blocks can be mechanically hung off the crown block by means of spring-loaded latches. With the latches engaged the traveling block can move much faster, allowing light loads to be run at as much as a 400% improvement over the maximum number of falls.

These blocks can easily be changed using remote hydraulic controls, operated from the drilling cabin. Once the traveling block is raised to its highest position it takes only a few seconds to adjust the number of blocks it is running on. This offers flexibility during the running process.

This design was borrowed from a system Huisman-Itrec has on many of its cranes and other equipment currently in service. Automated control of the electric motors of the drawworks provides the heave compensation. A real-time signal from a motion sensor in the mast triggers the fast-response winch drives, which adjust to compensate for vessel motion. Roodenburg said this real-time signaling is an advantage over systems that rely on a wave or motion-prediction method.

For control during extended time periods, such as during drilling, the MPT also features passive heave compensation. Using hydraulic cylinders and accumulators installed inside the mast, and linked to the traveling block, the MPT can balance the weight on the drill string to minimize the effect of vessel motion.

To maintain fine control of the drilling operations, but avoid running the active heave compensation system fulltime, Huisman-Itrec developed an optional downhole control system for the MPT. This system provides a direct link between the riser ring and traveling block. A wire rope is reeved from a set of winches mounted in the drawworks winch frame, via sheaves connected to the compensator blocks, to a block on the forward, hoist side, of the mast. The riser slip joint ring is connected to this block with a wire rope.

This direct link means that relative motions between the vessel and riser ring are transmitted directly to the traveling block, resulting in a constant weight on bit. This design also allows for an adjustment of the force placed on the drillstring. The distance between the traveling block and the riser ring remains constant. In compensation mode, the control system remains stationary, not paying out or taking up any line, thus not consuming any power.