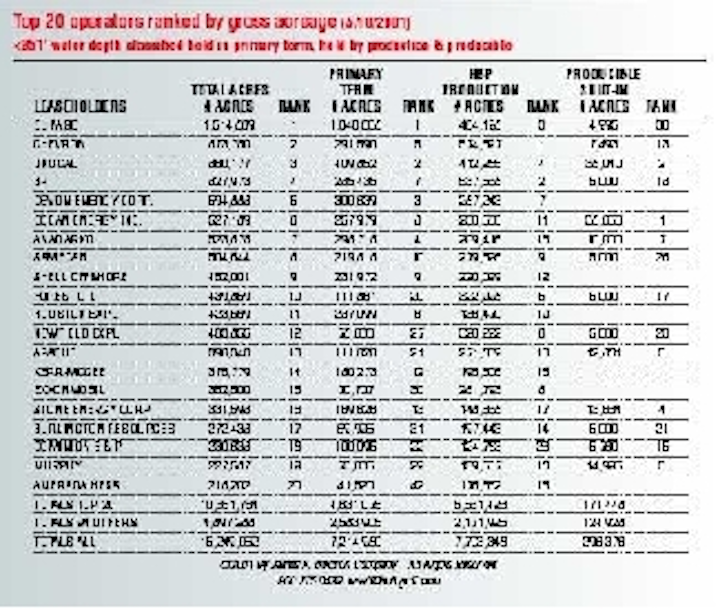 Of the top 20 operators, five were majors holding 22%. Of the lease acreage in water depths less than 351 ft, 47% is held in primary term, mostly undrilled, and 51% is held by production.

If the US is relying upon the US Gulf of Mexico to help support natural gas supplies in the coming years, it may need to provide larger incentives for producers to go after deep gas on the shelf. Optimally, high gas prices should have incentivized shelf exploration earlier this year, and certainly for deeper reserves eligible for royalty relief, but that deep exploration is not taking place.

Gulf of Mexico producers, for the most part, are re-working existing fields to maintain gas delivery obligations for pipeline throughput. Few new exploratory gas wells on the shelf are being drilled, and gas production in the year 2000 has declined 20% from 1997, as producers run out of adjacent reserves to drain.

Independent operators control 63% of the leases held by production in shallow water on the shelf, where much of the effort to meet gas delivery obligations is taking place. Before Sale 178, there were 1,407 undrilled leases in less than 351 ft water depth, of which 82% were held by independents. If they remain undrilled, all of these leases will expire by 2005. Many of the 760 leases expiring in 2001-2002 will expire undrilled.

The lack of shelf exploration for gas probably is not what the US Minerals Management Services (MMS) had intended, and the royalty relief for drilling deep gas below 15,000 ft true vertical depth (TVD) offered in OCS Sale 178 was an incentive to gas producers. However, the MMS may find that it will have to offer deep gas royalty relief to the entire shelf of existing leases, as well as future leases, to stimulate the drilling needed to meet future US gas needs.

This brings up another issue. Should deep oil royalty relief on the shelf also be granted as an exploration incentive to optimize shelf prod-uction?

Although the continental shelf ends at a depth of 656 ft water depth, an analysis of leasing, drilling, and production activity, by operator type, in water depths under 351 ft provides an insight into the gas exploration dilemma in the US Gulf of Mexico.

Drilling activity was up in water depths under 351 ft in 2000 over the previous two years, but production continues to slide, an indicator that operators are reaching the end of extraction for reserves in shallow depths (see accompanying drilling and oil and gas production charts). The only large pools left, for oil or gas, will be in deeper sediments, something that operators remain reluctant to pursue without royalty and stable price incentives.

The largest holder of acreage in water depths under 351 ft. is El Paso Production, which obtained much of the acreage through the acquisition of several other operators. The second leading holder is Chevron, followed by BP, Devon Energy, and Ocean Energy (see accompanying top 20 operators chart). Chevron and BP are major holders of acreage held by production in these water depths. The leading holder of "producible shut-in" acreage is Anadarko, followed by Unocal.

If there was any interest in giving up entirely on very shallow water acreage in the Gulf of Mexico OCS, Lease Sale 178 did not indicate it. A total of 292 leases granted in OCS Lease Sale 178 (through May 15) will expire in 2006, compared with 295 expiring in 2005 from acreage granted last year.

The El Paso Company apparently decided it had enough acreage and bid only lightly in OCS Sale 178. The operator has 77 shallow water leases expiring this year, 58 in 2002, and a grand total of 212 leases expiring by 2005.

Continuing an analysis of operator activity in water depths under 351 ft, a low total of 40 discoveries were made in 2000, far below the 68 recorded in 1999, 65 in 1998, and 97 in 1997. With greater capabilities in seismic surveying and processing, that low total is an indicator that shallow zone reserves are being drilled out.

The dry hole total (57) in this water depth was far lower than in previous years, indicating greater drilling efficiency, but also an indicator of increased focus on development and re-development drilling on existing leases. The 75 wells which have not been tested were classified as unknown type in the year 2000.

At the moment, for all water depths, there are nearly 5,000 undrilled leases in the Gulf of Mexico, and at the present rate of drilling, only one-fourth of this number will be drilled before expiration. On the shelf, the leasing period is five years, and the wait for seismic and geological evaluation and availability of a drilling unit can occupy a large part of that lease period.

But, gas drilling and development in shallow water is usually a fast-track activity, meaning that operators will usually drill in the last year or two of the leasing period. In recent years, however, the rate of relinquishments of undrilled acreage indicates that drilling may not have been a consideration in the first place.

So, if operators aren't drilling their leases, what are they doing with them:

Regardless of the issues, should the MMS leasing process be revised to elicit more activity or turnover on leases? Possibly, but leasing strategists have to design a program to give some flexibility for producers during years of weak oil/gas prices. A leasing period of five years seems generous now, but it may not be at the bottom of the oil and gas price cycle, when producers are halving drilling budgets.

While it may be difficult for the MMS to reject a competitive stack of low bids on a single lease, leasing fees can be designed to escalate during the leasing period or drilling requirements can be introduced. These are not steps the MMS appears inclined to consider, but the procedure is being used for tract licensing in many parts of the world.

The bottom line is that the tracts are not being drilled, for a variety of reasons, and this has to be a concern for gas deliverability from the Gulf of Mexico, as well as the producers who could fall short on gas delivery contracts in the future. The Gulf of Mexico has always been attractive to producers for political and infrastructure reasons, but it may now have to compete for shallow water drilling resources with the rest of the world.

In 1996, royalty relief for deepwater kicked off an exploratory and development effort. This effort produced, in the year 2000, more than 226 million bbl of oil in water depths greater than 1,500 ft.