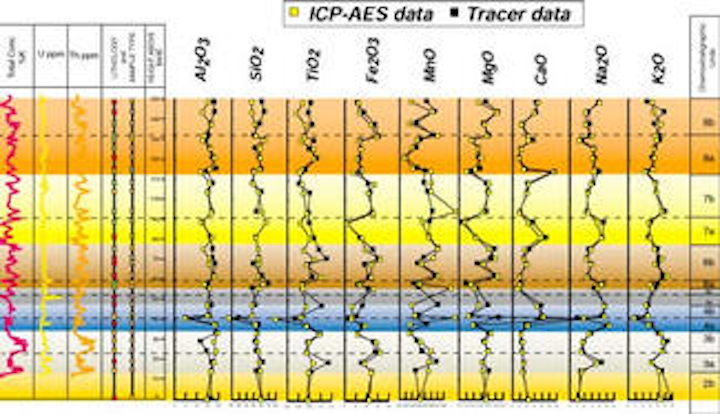 The technique of chemostratigraphy combines the disciplines of geochemistry and stratigraphy, and is based on the identification of variations in the elemental composition of sedimentary rocks. Such variations are used to identify, subdivide, and correlate sequences.

The technique can establish distinctive geochemical "fingerprints" for formations, packages of sedimentary rocks and, in some cases, individual beds. Chemostratigraphy has been used by UK-based Chemostrat Ltd. since 1994 to solve numerous correlation problems in sedimentary basins worldwide, sequences ranging in age from Cambrian to Recent, and in a variety of depositional environments.

ICP-based chemostratigraphy cannot be used in real time due to the meticulous and lengthy sample preparation that requires full wet-lab facilities and a trained technician. In addition, daily laboratory operations require significant attention to peripheral aspects of ICP operation, such as maintenance of clean-lab/wet-lab conditions for sample preparation, vacuum pumps, purge gases, power conditioning, and temperature and vibration control.

For chemostratigraphy to be used as a real-time tool by the petroleum industry, a solution to the elaborate ICP analytical process was required. This solution involved the identification, development, and application of laser-induced breakdown spectroscopy (LIBS) technology.

Halliburton Energy Services, through the Sperry-Sun Drilling Services product service line and Westport Technology Center International business unit, collaborated with Chemostrat Ltd. to investigate whether a pre-commercial LIBS instrument designed by a third-party manufacturer could be successfully developed for use in wellsite chemostratigraphic studies. The resulting development and commercialization program produced the LaserStrat LIBS instrument and service for quick-turnaround chemostratigraphy at the wellsite.

LIBS technology and instrumentation is based on a Nd:YAG pulsed-laser energy source that excites sample material to produce optical emissions, predominantly in the ultraviolet wavelength range. Spectral wavelengths of 200-800 nanometers are compared to a calibration database while selected elements are identified and quantified.

The objectives of the development program were to ascertain whether the LIBS instrument was capable of obtaining elemental concentrations from an array of rock types such as clean sandstones, shaly sandstones, shales, and carbonates, and whether the data acquired were of similar quality to data obtained by ICP-AES techniques. If these objectives could be met, the LIBS instrument could be utilized for a real-time chemostratigraphy service deployed at the wellsite to assist with drilling decisions.

One aspect of the development program was to define a quick and easy sample preparation methodology that would allow rapid sample presentation to the instrument. Another aspect was to re-analyze samples that had already been analyzed by the ICP-AES to demonstrate that the LIBS instrument data quality was similar to that obtained from the industry standard instrumentation. Additionally, work was required to show that data derived from LIBS instruments could identify and characterize the same chemo-stratigraphic features as ICP-derived data.

Although the details of the sample preparation procedure are proprietary, the general aspects are as follows: rock samples are washed, dried, and ground to a powder for the purpose of homogenization. Several grams of the powder are then pelletized in an automated press to produce a 13-mm-diameter pellet, which is loaded into an 18-sample tray and placed into the LIBS instrument for analysis.

Experimentation was performed to determine the best spectral lines and optimum analytical parameters, which can conclude if the desired elements are present within a sample. These include: laser power, time of optical acquisition after plasma initiation (delay variable), collecting time of optical acquisition (window width variable), and physical height of the laser focus.

Critical to the accuracy and precision of acquired elemental data is the selection of "clean" spectral lines or lines that are relatively free from interference from nearby lines. The parameters for these lines were re-optimized for each major rock type (e.g., shales, sandstones, limestones) due to the "matrix effect" that different bulk compositions cause in the spectral background level.

Following calibration, the LIBS instrument was used in the laboratory to analyze samples from several sedimentary rock sequences that had previously been analyzed by ICP techniques. Two case studies are described below.

Overall, the correspondence between the ICP-AES and LIBS profiles was good. The major elements CaO, Na2O, and K2O showed virtually identical values for almost all samples, while data sets for the other major elements were similar. The profiles trends and steps were generally analogous, proving that the LIBS analysis could closely reproduce geochemical data gathered by ICP-AES for clean, uncontaminated rock samples.

The LIBS instrument subsequently analyzed samples from three of the wells. Trends and steps in the geochemical profiles constructed from this data compared favorably to the corresponding ICP data in all three wells. This experiment clearly showed that the same chemo- stratigraphic interpretations derived from the ICP-AES analysis could be made independently with the LIBS instrument. While contamination of samples by oil-based drilling fluids caused some scatter in the data, generally from suppression of spectral line intensities, it did not obscure the trends that were critical for chemostratigraphic interpretation.

Building on the results of the development program, Halliburton Energy Services and Chemostrat Ltd. collaborated to create LaserStrat, a service that utilizes the LIBS instrument for real-time chemostratigraphic analyses at the wellsite. The first field test for the service took place in the first quarter of 2001 in the Dutch sector of the southern North Sea.

The operator was drilling a four-well program that called for vertical top holes through a sequence of Tertiary shales followed by horizontal legs through the underlying Cretaceous Chalk hydrocarbon reservoir. A critical aspect of drilling operations was to accurately pick a casing point just above the unconformity that separates the Tertiary shales from the Chalk. This casing point pick is critical to the successful completion of the wells and also has important safety risk aspects. Therefore, it is imperative to land the casing in the optimum position shown schematically (see figure).

Selected data from previously drilled offset wells are displayed as geochemical profiles. The important geochemical features are Markers 1 and 2 (Unit 2). A downhole decrease in TiO2 and a concomitant increase in K2O values define the former. Marker 2 (Unit 2) is identified by a sharp downhole increase in CaO and SiO2 values and comprises a series of soft mudstones that, in cuttings samples, appear homogeneous. Marker 2, which lies approximately 10 m above the top of the Chalk reservoir, is interpreted to represent a gently winnowed lag lying above the Chalk. Similarly, the elevated CaO and SiO2 values of Marker 2 represent reworking of carbonate (Chalk) and of flints. The ubiquitous nature of this winnowed lag in the study area is a key feature that allows identification of the casing point.

The figure also displays a binary diagram constructed from previously drilled offset wells 2 and 3 and the while-drilling, geochemical pathway is marked by arrows. Samples plotted in the bottom right field are those from below Marker 1 (ideal casing point. By plotting data obtained in near real time at the wellsite, plotting geochemical profiles and binary diagrams similar to that on the figure, the geochemical "fingerprint" of the casing point can be identified. The casing point identification technique was applied to all four tophole sections with a 100% success rate.

The results from the development program and the successful field study have shown that quality whole-rock geochemical analyses can be obtained for a variety of sedimentary rock types. Data for all ten of the major rock-forming elements and nine high-abundance trace elements can be quickly acquired. Accuracy and precision are at levels comparable to those attained with ICP-AES instruments. Sample preparation time and effort is minimal and does not require the use of wet-lab or clean-lab facilities. The wellsite field-test data taken from cuttings samples were available within 15 minutes of the sample appearing at the shakers.

Data can be acquired in an ambient atmospheric environment. Instrument operation does not require a vacuum system, a sealed sample chamber, or a purge gas. This operation makes the instrument ideal for wellsite or remote laboratory work, and simple to operate by wellsite technicians or engineers who may not have extensive laboratory experience.

ICP instrumentation remains essential for most chemostratigraphic studies, in particular pilot studies, to establish chemostratigraphic frameworks in advance of the LaserStrat services' wellsite work and in instances where low-abundance trace elements (Nb, Ta, Hf, Th - the rare earth elements) are critical to interpretation. At present, the service is not capable of accurately determining these low-abundance elements, and they must be acquired by ICP-MS. For the first time, operators can obtain quality geochemical data for selected elements at the wellsite.