The Mexican National Hydrocarbons Commission (CNH) announced that several oil and gas companies enrolled to bid for Mexico's acreage in shallow water, kicking off the first phase of the country's bidding round for 14 exploratory oil and gas blocks in the Gulf of Mexico. 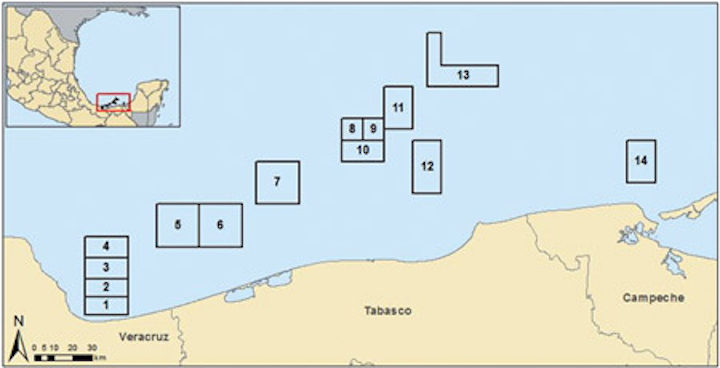 Second phase of Round One begins

The Mexican National Hydrocarbons Commission (CNH) announced that several oil and gas companies enrolled to bid for Mexico's acreage in shallow water, kicking off the first phase of the country's bidding round for 14 exploratory oil and gas blocks in the Gulf of Mexico. Contracts are slated for release in July with extra-heavy oil fields being awarded in August, and deepwater acreage in December, according to the energy ministry's tentative timeline.

With the recent plunge in oil prices, many speculated whether major international oil companies would continue to show interest in the initial phase of the bidding round. Mexico took note and revised its initial offering by eliminating a few costly shale fields from its private oil tenders.

"The government has admitted that it may need to further delay high-cost areas, such as unconventionals," stated Adrian Lara, GlobalData's senior upstream analyst for the Americas, in a released statement. "On top of this, the new schedule appears ambitious for a regulatory agency organizing its first-ever licensing round."

Despite these delays, the lower oil price should not affect the competitiveness of bidding on the shallow-water exploration blocks where production costs are less than $20/bbl, remarked Juan Carlos Zepeda, head of CNH. The commision is the regulatory overseeing Mexico's "Round One."

For the first phase of Round One, companies reviewed the material, which opened the bidding and contract terms. According to Mayer Brown's report: "Mexico's E&P Round One Kicks Off: Bidding Terms for Shallow Water Areas Released," these exploratory areas, located off the coast of the states of Veracruz, Tabasco, and Campeche in southeast Mexico, hold prospective resources that are expected to contain light crude oil with low production costs. Each contract area is subject to different minimum investment obligations.

In the first round, the bidding process was divided into the following five different phases:

PEMEX, like other companies, can bid on no more than five of the 14 areas on offer in the first tender. But with the depressed oil prices, authorities were "redefining what can be offered," Zepeda said. The Eagle Ford shale has geological continuation of formations that cross into Mexico, but technical challenges, including lack of infrastructure and water and swift production times correlate to costs that are not attractive during a down cycle. The commission along with SENER, the Energy Ministry, will decide by 2Q 2015 which areas will be trimmed.

For the second portion of the shallow-water tender of Round One, announced Feb. 27, the ministry included nine additional shallow-water fields to be auctioned off in five contracts. The shallow-water areas span 108 sq mi (281 sq km), which SENER expects $4.5 billion in investment over the next five years. The fields are situated off the coasts of the southeastern states of Tobasco and Campeche. Nearly all of the fields have certified crude reserves and are in the development phase, not requiring additional exploration, the Energy Secretary said in a recent statement.

"These nine fields are very attractive because they are in the southeastern basin (of the Gulf of Mexico), the country's most prolific area," the secretary added.

Total reserves in the shallow-water tender are estimated at 671 MMboe, with production forecast to be 124,000 b/d, remarked Sener.

Several major companies, including ExxonMobil, Chevron Corp., Shell, Ecopetrol SA, and BG Group have paid a $350,000 fee (on top of a $18,600 registration fee) for access and authorization to the data room that houses seismic and geological data that has been the exclusive preserve of state oil company PEMEX for nearly eight decades.

With this auction, the government expects to boost oil production that has been "severely affected by the decline of the supergiant Cantarell field" and create 2.7 direct jobs per $1 million invested.

In that initial phase, 43 companies have expressed interest, 26 have paid for access to the technical data room, and 16 have entered the pre-qualification process. The oil bid round is the product of a 2013 overhaul that opened Mexico's energy sector to private investment for the first time since 1938.

Moreover, later this year, Mexico plans to award permits for companies to conduct seismic studies, including an assessment of presalt prospects. Two-dimensional and 3D studies conducted by outside parties will be a first for the country.

"I think what Mexico has accomplished recently is outstanding for two reasons," Gabriel Salinas, associate, Mayer Brown, toldOffshore: "the number of years that the Mexican industry has been closed, and the emblematic nature of oil in Mexico." Within one year, he noted, "a major reform occurred with new energy laws and regulations set in place. They've done their homework and I'm excited to see this process begin." •