Over the next seven years, Mellitah Oil & Gas is looking to develop three Libyan offshore oil, condensate, and gas discoveries. 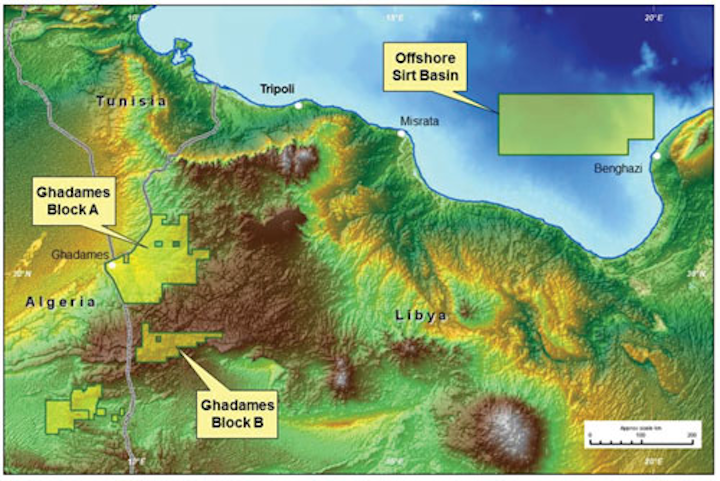 Musa, speaking at the recent 4th New Libya Oil & Gas Forum hosted by IRN in London, said the three fields were designated the A, C, and E structures. “C” is actually a second-phase development of the producing Bahr Essalam field in concession NC41, 110 km (68.4 mi) offshore in around 200 m (656 ft) of water.

Bahr Essalam comprises a 50-km (31-mi) long and 4-km (2.5-mi) wide series of anticlines. Mellitah - a joint venture between the Libyan National Oil Company (NOC) and Eni - has subdivided the field into the Western, Central A, Central B, and Eastern areas, with varying internal pressures, fluid contacts, and fluid properties. The western parts are more heavily faulted. The reservoir is mainly gas condensate, with a small oil rim beneath the gas zone in the Central B and Eastern areas, respectively 80 ft (24 m) and 35 ft (10.7 m) thick.

Drilling was due to start before year-end, Musa said, and the program should take around 720 days to complete, with Phase II set to come onstream during summer 2017. The total drilling and completion budget is $772 million, while the full cost of the Phase II project is estimated at $2 billion.

To the east of Bahr Essalam is the E structure, a rounded, flat anticline with two culminations separated by a saddle. The field is 126 km (78.3 mi) offshore in water depths of 205-235 m (672-771 ft) and extends into the adjacent NC35 concession. Since the initial discovery in 1977 on the northern part of the structure, five appraisal wells have been drilled. Hydrocarbons are present in the Metlaoui carbonates formation, and comprise a thick gas-condensate column and a thin oil column. Reserves are estimated at 1,838 tcf of gas, 65.5 MMbbl of condensate, and 82 MMbbl of oil.

Mellitah plans to install a platform in the central part of the structure housing 15 gas and five oil wells, with two subsea wells in the western part exporting gas to the platform via a 16.3-km (10-mi), 8-in. pipeline and another cluster of four subsea wells in the north exporting gas to the same facility via two parallel 7.5-km (4.67-mi) pipelines. All gas, oil, and condensate produced at the platform will be exported via two parallel 126.2-km (78.4-mi) pipelines to an onshore plant (32-in. diameter for gas, 14-in. for oil and condensate). The $3.62-billion project is currently slated to start up in spring 2022, initially producing 600 MMcf/d of gas.

The A structure is southwest of Bahr Essalam, 75 km (46.6 mi) offshore in 125 m (410 ft) of water. This is a faulted anticline, 14 km (8.7 mi) long and 3 km (1.87 mi) wide. To date, four wells have been drilled and tested, encountering hydrocarbons in Metlaoui formation carbonates, with a large gas cap and a 96-ft (29-m) column of 39°API oil. Estimated reserves are 671 bcf of gas, 32.2 MMbbl of condensate, and 5.9 MMbbl of oil. All four wells will feature in the development - Mellitah plans to drill another eight, Musa said, comprising seven platform wells and one subsea. The proposed $1.49-billion project, designed to deliver 160 MMcf/d of gas, could start up in spring 2021.

The company has acquired 17,000 sq km (6,564 sq mi) of 3D seismic over the central and eastern part of Area C, and was only months away from spudding its first exploration well before growing instability in Libya forced it to declare Force Majeure in February 2011. Fifteen months later, BP lifted Force Majeure, only to re-declare it in August 2014 as Libya’s situation deteriorated further.

Peijis said BP is waiting for the moment to begin safely executing its offshore drilling program, starting with a long-planned well on the Trelia prospect in the Carbonate Flank play. However, even if proposals for forming a new unity government succeed, certain issues still have to be addressed before operations can start offshore, Peijis said. One is the need to implement procedures to deal with any resultant oil spills; another is the safety risk posed by boats carrying refugees passing close to areas of offshore activity.