Considered one of the oldest hydrocarbons producing areas in the world with the potential to emerge once again as a major source of growth in the global oil and gas supply, the Caspian region could make a significant contribution to the global gas balance. 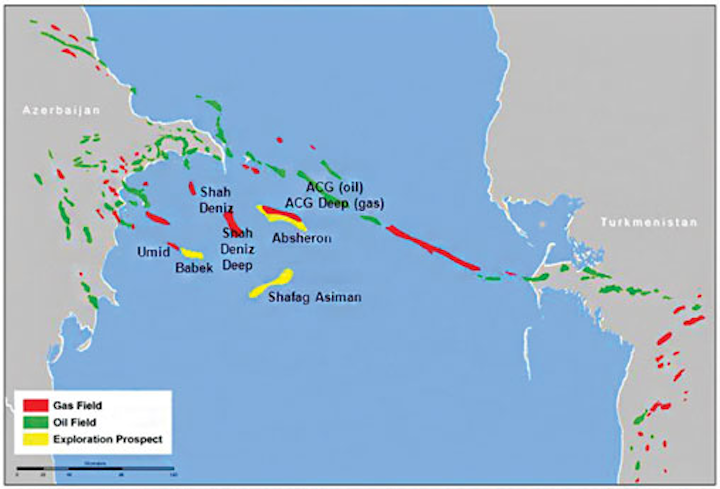 Considered one of the oldest hydrocarbons producing areas in the world with the potential to emerge once again as a major source of growth in the global oil and gas supply, the Caspian region could make a significant contribution to the global gas balance. Capex spending in the Caspian region is estimated to reach $55 billion between 2015 and 2020 with the region estimated to hold more than 200 Bbbl of crude worth $4 trillion, according to the US Department of Energy.

However, exploration activity has waned in recent years, Gabriel Mynheer, Russia and Caspian upstream research analyst for Wood Mackenzie, toldOffshore. Over the last 10 years, only eight fields have been discovered.

“A distinct lack of rig availability, complex geology, and difficult weather conditions has led to extremely high exploration costs,” he added. Due to this, operators have shifted their attention to appraising and developing existing fields.

He noted: “Unlike the rest of the world, the Caspian is a closed market with most rigs being in high demand and operators therefore unlikely to realize their like-for-like costs. However, some savings have and can be made through increased efficiencies and reduced drilling times - as has been seen at the Shah Deniz field.”

Offshore exploration drilling in Kazakhstan has been restricted with most jackup rigs under long-term contracts. In mid-2015, Lukoil loaned theAstra rig to NC KazMunaiGas (NC KMG) and ONGC to spud the first well on its Satpayev prospect. Plans are to drill an exploration well at the Satpayev structure, which lies in the northern part of Kazakhstan sector of the Caspian Sea at a distance of 90 km (56 mi) from the coast, this year.

The commissioning of the newSatti jackup in 2015 could boost offshore exploration in the area, he said, which is slated to drill the second exploration well at the Satpayev block by mid-2016.

Furthermore, three Eurasia jackups have been active in the Caspian region with a few securing long-term contracts. The jackupAstra drilled a well for N Operating Co. in the Kazakh sector, followed by a well for Lukoil in the Russian zone. In the Turkmen sector, the jackup Saturn drilled two wells for Petronas Carigali, while the Neptune jackup drilled three wells for Dragon Oil on the Cheleken Contract Area. The Neptune rig is slated to drill the first exploration well at the Hazri prospect in 2016.

A fourth newbuild jackup,Mercury, mobilized to Turkmen waters where it is awaiting certification and license to drill/permits, currently delayed by alterations to clients’ drilling plans.

In Azerbaijan, BP and SOCAR are both awaiting the arrival of the new Keppel semisub, Mynheer commented, to drill exploration wells at the Shafag-Asiman and Babek prospects, respectively. The vessel is scheduled for delivery in the final quarter of 2016 and will be built to drill in the Caspian’s hard conditions at depths of up to 12,000 m (39,370 ft) below the seabed. The rig would be used to drill for gas at Babek, which the company indicated might contain as much as 400 bcm of gas and 80 MM metric tons of condensate.

Interpretation of 3D seismic on this area is completed, read the report from BP-Azerbaijan’s 2Q15 results. The survey process lasted 18 months and now an additional six months is needed to plan drilling of the first exploration well. It is reported that the depth of the first well on the Shafag-Asiman block is about 6,500 to 7,000 m (21,325 to 22,966 ft) and high-pressure and high-temperatures are expected during drilling. The water depth in the area varies between 650 and 950 m (2,133 and 3,117 ft) and total area of the block is 1,100 sq km (425 sq mi). According to the preliminary data, the productive thickness totals about 3,000 km (1,864 mi) and the depth is between 5 and 8 km (3 and 5 mi). Until now, no geological exploration work has been conducted in this area.

The contract for development of the block between SOCAR and BP Exploration was signed in July 2010 and was entered into force in July 2011 with each holding a 50% share. The contract was signed for a 30-year period with the possibility of an additional five years. The exploration period is four years with the possibility of three additional years, depending on the drilling program’s outcome. Two wells are expected to be drilled in the first stage with an additional two wells to be drilled in the second stage. Once operation kicks in, both parties will be joint operators.

In June 2015, Eni and KazMunayGas (KMG) finalized an agreement that defines the commercial terms of the transfer of 50% to Eni of the subsoil use rights in the Isatay block in the Kazakh Caspian Sea. The block is estimated to have significant potential oil resources and will be operated by a joint operating company established by KMG and Eni on a 50/50 basis.

KMG will benefit from Eni’s proprietary technology, exploratory success, and experience in environmentally and technically challenging conditions of the Caspian Sea shelf, the company recently commented in a press release. The license is expected to be issued in the next few months.

This agreement will be the first offshore license issued in Kazakhstan since 2010 and will benefit from recent additions to Kazakh rig capacity. Under the new contract, the operator is to conduct seismic work and to drill at least one well during a six-year exploration period.

As for Shah Deniz, the $28-billion Phase two development is under way, added Samuel Lussac, research manager for Wood Mackenzie’s Caspian Upstream research service, with 40% of the upstream development complete as of mid-2015.

BP Exploration extended its contract at the field with the contract extension period commencing in May 2016 and will run until 2021. The rig has been built for year-round operations at water depths from 40 to 1,000 m (131 to 3,281 ft).

“We are very pleased with the extension of Maersk Drilling’sHeydar Aliyev rig and look forward to continue our long-standing cooperation with BP,” said Claus V. Hemmingsen, CEO of Maersk Drilling and member of the Maersk group’s executive board in a released statement.

The Kashagan partners are currently investing around $4 billion to replace faulty pipelines to shore remarked Mynheer, after sour gas leaks forced production to halt soon after it began in late 2013. Following investigations, the partners decided that both the oil and the gas pipeline will be replaced.

The consortium will likely embark on a second development phase but the timing and scope are uncertain, he said.

“Liquids production in Kazakhstan could indeed remain stable in 2016,” added Lussac. “Delayed startup at Kashagan obviously has an impact.”

In addition, Tengizchevroil (TCO), which operates the supergiant Tengiz field, is keeping production flat, at around 580,000 b/d until the oil price recovers (targeted for mid-2016), Lussac noted. Because of this, production from TCO is about 10% lower than previously anticipated.

Kazakhstan continues to rely on Kashagan restart and expansion phases at Tengiz and Karachaganak to increase production now that mature fields are in decline.