As more offshore production platforms grow older and are taken out of service, operators are looking for the most cost-effective means of decommissioning. Rigless well abandonment procedures are gaining interest as a decommissioning option, but to date no empirical studies have attempted to quantify the reliability of this well abandonment method. The purpose of this three-part series has been to estimate the probability that a dry tree well abandoned using rigless technologies requires remediation. 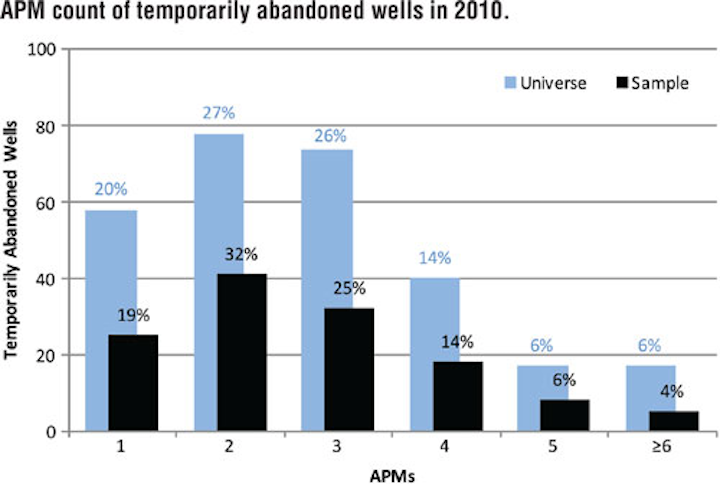 As more offshore production platforms grow older and are taken out of service, operators are looking for the most cost-effective means of decommissioning. 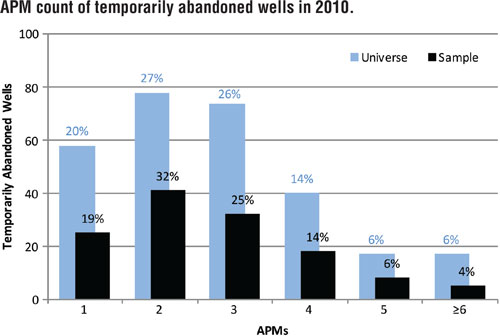 The purpose of this three-part series has been to estimate the probability that a dry tree well abandoned using rigless technologies requires remediation. This third part of the series outlines the characteristics of leaking/bubbling wells and the limitations of the analysis.

As mentioned in parts one and two, a random sample of 502 platform wells abandoned in 2010 in water depths less than 400 ft (122 m) were tracked from 2010-2015 to identify leaking/bubbling events. Nine wells were identified that required remediation leading to a remediation probability of 1.8%. Wells utilizing gas-lift mandrels exhibited a 3.1% remediation probability compared to 1.0% for non gas-lift wells.

For each sampled well, all APMs associated with the wellbore from 2010-2015 were reviewed, and APM counts identified. On average, each well was associated with 3.1 APMs over the 2010-2015 period, and the distributions appear approximately lognormal for both the sample and universe for both temporarily abandoned and permanently abandoned wells. Most, but not all APMs submitted or approved in 2010 resulted in well abandonments in 2010.

A total of nine wells from the 502 wells sampled reported leaking and required remediation after abandonment operations were completed, yielding an estimated remediation probability of 1.8%. Since p = 1.8% and n = 502,

= 0.6%, a 95% confidence interval on remediation probability under a normality assumption would place the population proportion within plus or minus two sample standard deviations, or from 0.6% to 3.0%. 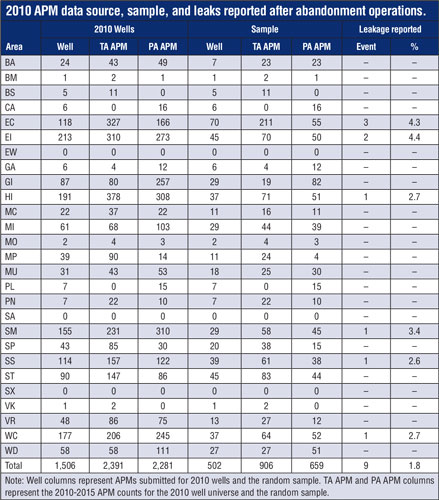 In terms of well construction, there is noa-priori reason why gas-lift wells should be more susceptible to leaking after plugging than wells without gas-lift mandrels, and so these results may be a coincidence or limitation of the database.

Wells that recorded a leaking/bubbling event after abandonment operations were performed are identified by problem and remediation technique. All of the leaking wells were in temporarily abandoned status during remediation. Most of the trees were likely on and platforms were in place as inferred from the APM report, but it is also possible to have a well that is in fully temporarily abandoned status with all plugs in place that have no tree. Gas-lift mandrel counts ranged between four to nine, and all but one well had a single production tubing. Five of the leaking wells were on structures reefed-in-placed. 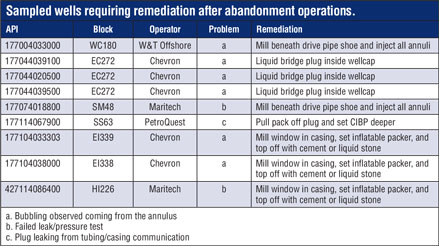 Some of the limitations of the analysis are described below.

Sample size. In theory, it is possible to track all 11,000 wells abandoned in the GoM since 2004 and estimate abandonment remediation probability with a reasonably high level of confidence. In practice, besides the time and resource constraints that limit the amount of processing that can be performed, the estimated probabilities can only serve as a proxy of future activity, and so complete enumeration needs to be approached cautiously. Low probability events require large samples to reliably estimate, but how large is “large enough” to provide useful statistics is a matter of debate. For granular well subclasses (e.g., gas-lift wells), confidence levels associated with estimated probabilities are lower because of smaller sample sizes.

Evaluation period. Wells are constructed according to the geologic conditions, the industry practices, and government regulations at that time, and at the end of their useful life, wells are abandoned according to the knowledge, regulations, and technology at the time of abandonment. We believe that any year within the period is representative, but since the sample wells were constructed over many decades, well vintage and best practices at the time of construction vary more significantly. Selecting year 2010 as the sample period provides a five-year time window to detect leaks after operations are performed, which is considered adequate time to detect near-term failures. Of course, there is no way to ensure that any leak after plugging will not manifest itself within five years.

Detection. Accuracy of the leaking/bubbling data depends upon the ability of operators to detect leaks. It was assumed that all detected leaks were reported, but it is conceivable that there are leaking wells that are not detected, say, because wellheads or platforms have been removed. There are no active monitoring programs for abandoned wells except for those abandoned wells that were reported as leaking. The likelihood of an expression being seen on the surface decreases with increasing water depth.

Misinterpretation.Well APM history is subject to interpretation error because submission/approval dates may not be recorded properly, or dates were recorded properly but not properly interpreted. Wellbore schematics and other information reported in the APM were used to identify rigless procedures, which are believed to be reliable. Approval and submission dates were used to distinguish between remediation activities occurring during and after operations were performed, and in some cases may be ambiguous.

Fluid and reservoir conditions. No distinction was made between fluid or fluid severity. Wells with sour fluids may experience higher corrosion rates and stress cracking which may result in a higher probability of failure over time, but this was not evaluated. Oil wells depleted at abandonment with low gas-oil ratios (GOR) and low bottomhole pressures (BHP) are less likely to leak relative to oil wells with high GOR and high BHP, and gas wells, based on industry experience.

Well configuration. Shallow-water wells are mature and at the time of their construction may have applied less advanced completion procedures or materials than are currently available. Completion type (e.g., gravel pack, tubing string, gas-lift mandrels, liner, etc.), cement integrity and placement, and other factors may affect the probability of leakage but was not a factor in assessment. Wellbore complexity was also not a factor or a control variable. Most wells on the shelf are old, and well interventions on old wells are notorious for their unpredictable completion and wellbore conditions, but whether these conditions lead to increased remediation risk and leak probability were not considered.

New technologies. Technology advancement and better knowledge of failure mechanisms should produce lower failure rates, for all things equal, than abandonments performed in an earlier era. However, because the period of evaluation was short, this effect is unlikely to be detectable. New self-healing cement technologies developed in recent years should help ensure long-term well integrity in the future, and better behind pipe log evaluation tools will improve cement placement and seals.