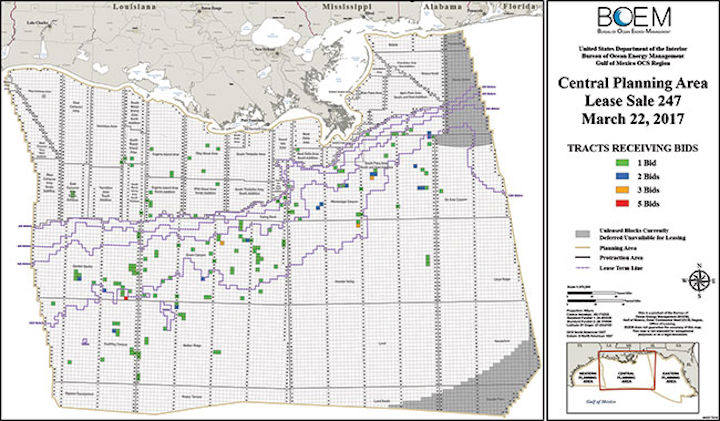 Each bid will go through a 90-day evaluation process to ensure the public receives fair market value before a lease is awarded.

This is the final lease sale to be held in the Gulf of Mexico under the current Outer Continental Shelf Oil and Gas Leasing Program for 2012-2017. BOEM estimates the lease sale could result in the production of 460 to 890 MMbbl of oil and 1.9 to 3.9 tcf of natural gas.

As of March 1, 2017, about 16.9 million acres on the US OCS are under lease for oil and gas development (3,194 active leases) and 4.6 million of those acres (929 leases) are producing oil and natural gas. More than 97% of the leases are in the Gulf of Mexico; about 3% are on the OCS off California and Alaska, according to BOEM.

US Secretary of the Interior Ryan Zinke said: “Today’s strong sale reflects continued industry optimism and interest in the Gulf’s outer continental shelf, a keystone of the nation’s offshore oil and gas resources and a vital part of President Trump’s plan to make the United States energy independent.”

The results of the lease sale were promising, said NOIA President Randall Luthi. The results “not only reflect an improving offshore oil and gas market, but also optimism for increased opportunities for offshore leasing, exploration and development under the Trump administration.”