With several capital intensive field developments sanctioned prior to the oil price decline, West Africa is anticipated to see robust demand growth through to 2018. 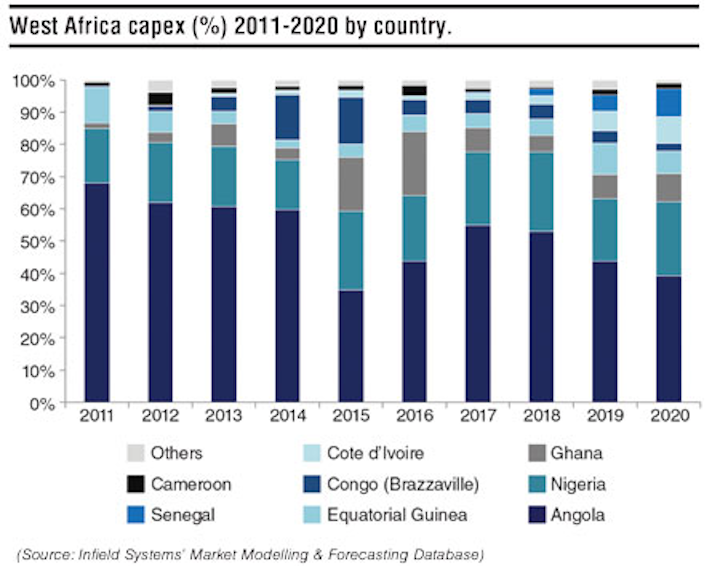 With several capital intensive field developments sanctioned prior to the oil price decline,West Africa is anticipated to see robust demand growth through to 2018. Over the 2016-2020 timeframe a capex demand compound annual growth rate (CAGR) of 4% is forecast. Angola is expected to dominate demand during the period, driven by Total’s activities; while the highest growth rates are anticipated for emerging countries of hydrocarbon production, in particular Côte d’Ivoire and the more established Equatorial Guinea.

Angola is expected to continue to drive capex demand within the West African region, with a 47% market share of demand between 2016 and 2020. After a decline in capex investment between 2014 and 2015, predominately as a result of giant projects such as N’Goma and CLOV seeing the majority of its development spend during the previous period, Infield Systems expects Angola’s demand to increase year-on-year through to a peak spend in 2018. Projects expected to drive this peak include Kaombo 2 and the presalt Cameia Mound, with the majority of installation capex forecast to take place in 2018. Despite the much-touted potential of Angola’s Kwanza presalt basin, exploration success has been mixed. Over the five-year period to 2020, Infield Systems anticipates for expenditure to be required on three presalt developments: Cameia Mound, Cameia (Phase 2), and Bicuar; with all three prospects discovered before mid-2014. From an operator perspective, Infield Systems anticipates for Total to drive capex demand, with a 40% share of the Angolan market over the 2016-2020 period, driven by its giant Kaombo multi-field complex.

Nigeria is expected to hold a 22% share of offshore expenditure demand over the 2016-2020 timeframe, a slight increase from the 18% market share seen over the previous five years. Altogether, Infield Systems expects for 54 potential fieldsoffshore Nigeria to require capex spend over the forecast timeframe, with Total-led developments anticipated to form 38% of demand during the period. The giant Egina project is expected to remain key to Total’s investment, with 60% of the French international oil company’s forecast demand offshore Nigeria expected to be attributable to the development. In terms of new project sanctions however, the uncertainty surrounding Nigeria’s Petroleum Industry Bill (PIB) has discouraged foreign investment. Now, the PIB, which has thus far been six years in the making, has been taken back to the drawing board with new proposals expected to include a greater level of consultation with IOCs in light of oil price declines.

Ghana is forecast to remain the third-largest destination for operator capex offshore West Africa going toward 2020, driven by the TEN (Deepwater Tano) developments. Tullow’s Mahogany East and the Eni-operated Sankofa OTCP are also anticipated to require substantial investment during the next five years. In operator terms, Tullow is expected to continue to lead investment, although the London-based independent is forecast to see declining expenditure; decreasing by a CAGR of -29% between 2016 and 2020. As a relatively young country in terms of hydrocarbon development, Ghana has looked to introduce new industry regulations since the giant Jubilee came onstream in 2010. Local content regulations have focused on adding value through the supply chain and developing human capital through the transfer of skills and expertise. The Ghanaian government aims for 90% local participation by 2020; although it remains to be seen the extent to which this will be achieved.

Equatorial Guinea is expected to undergo a capex demand CAGR of 13% over the next five years to 2020. A total of 28 fields may require capex during the period; an increase from the 15 fields invested in over the previous five years. Key to Equatorial Guinea’s demand growth is expected to be Ophir’s Fortuna FLNG project, which is forecast to comprise 28% of the country’s offshore capex demand during the 2016-2020 period. The project, which sees the independent partnered with Golar, entered front-end engineering and design in July 2015. It is anticipated to see its final investment decision (FID) by mid-2016, with Infield Systems currently forecasting installation to be completed by 2019. 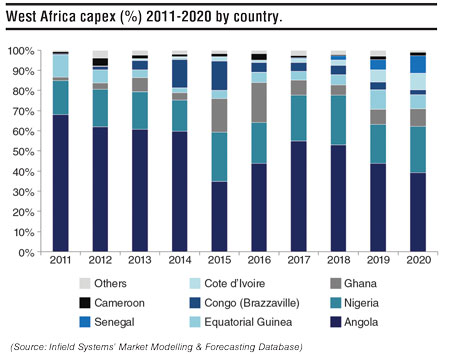 The previous five years has witnessed significant capex growth offshore Congo (Brazzaville) with Infield Systems noting a CAGR of some 154% from 2011 to 2015. This has been predominately driven by investment on the Moho Nord Marine project, which has comprised 52% of the country’s offshore expenditure. The project saw capex commence in 2013, with the entire development consisting of 28 subsea wells tied back to a production platform. Going forward, Infield Systems expects for Congo (Brazzaville) to see a capex CAGR decrease of -13% between 2016 and 2020; primarily the result of declining capex on the Moho Nord Marine area developments, but the emergence of Eni’s Nene and adjacent discoveries in the Marine XII block could alter this trend significantly.

Emerging countries of hydrocarbon development include the Côte d’Ivoire. Here, Total’s Saphir discovery in April 2014 highlighted the potential of the ultra-deepwater blocks to the west of the country’s offshore zone and the under-explored San Pedro basin. Altogether Infield Systems forecasts for up to 11 potential fields offshore Côte d’Ivoire to require capex during the next five years to 2020. While the highest demand is expected on Saphir, Infield Systems also anticipates the country’s eastern offshore zone, where prospects such as Eland and Kudu neighbor Ghana’s TEN fields, to also see investment during the period. Over the upcoming five years the country is likely to see increasing exploration, as a number of new operators have entered the country’s market over recent years.

Elsewhere, Infield Systems forecast a number of possible developments offshore Cameroon to require expenditure over the 2016-2020 timeframe. While the majority of these are in the very early stages of planning, the Golar Cameroon FLNG is expected to see completion in 2017, with the FID reached by Golar and its partners in September 2015. The facility, once installed, is expected to produce 1.2 million tons of LNG per annum from Perenco’s Kribi fields, which represents about 50% of the vessel’s capacity, over an eight-year period.

Prospects offshore Senegal may also see capex begin before the end of the decade. Infield Systems expects for operator Cairn Energy to lead development on the FAN-1 and SNE-1 Sangomar Deep discoveries, which were amongst the largest global discoveries of 2014. Infield Systems currently forecasts for the two prospects to be developed via an FPSO, which will have the capacity for future tie-ins of neighboring prospects, although the operator and its partners have yet to announce when a FID will be due on the development.

The previous year has been a challenging period for the global oil and gas industry. West Africa certainly has not been immune to the repercussions of oil price decline. Delayed projects include Shell’s Bonga South West, where FID has been postponed once again until 2016, and Maersk’s Chissonga has gone back to the drawing board. Going forward however, West African development is expected to remain strong, buoyed by a handful of giant projects sanctioned prior to the oil price collapse, and supported by increasing investment in new areas of production.