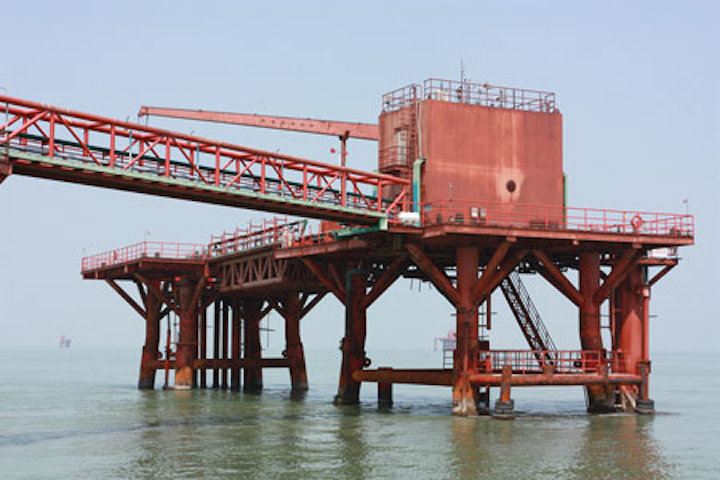 Chengdao in Bohai Bay was China’s first shallow-water oil and gas development, and more than two decades later, it remains the largest oilfield project for operator Sinopec’s Shengli Oilfield Branch. The 30-sq mi (78-sq km) field is also one of the most intensively developed outside the Middle East, with a large network of platforms.

However, the setting is harsh, with operations at risk from severe storms, ice build-up in winter, and occasional earthquakes.

After over 20 years in service many of the platforms have exceeded their design lives, but the combined production of over 3 MM t/yr of oil and gas remained significant to China’s economy, as well as generating around $480 million in annual income. Rather than commission replacement platforms during a period of sustained low oil prices, Shengli decided to initiate the country’s first large-scale life extension program for offshore facilities. Wei Wei, director of technology at the AOTO Science and Technology Center, outlined how the project came together at Bentley’s recent Year in Infrastructure conference in London.

Under Chinese law, ageing offshore platforms must undergo inspection due to the increased safety risks that they present. The wide-ranging scope of this project - 57 platforms were involved - drew support from over 10 national funds, with participation from research institutes including the China University of Petroleum, Dalian University of Technology, and Yantai University.

The first major challenge was optimization of the platform inspection strategies. “Almost all the existing guidelines were designed for new offshore platforms,” Wei Wei said, “but very few had been prepared for evaluating and inspecting existing platforms. To address this, the project team needed to determine the appropriate inspection period, guidelines for deployment of inspection, and to prepare requirements for inspection reports.

“On the one hand, the standards proposed by the team had to meet the extension needs, and on the other to reduce inspection diving times [for structures below the water line]. The team also needed to consider different types of platform extension, including inspection of structure thickness, cracks, flood, and vibration. This meant they had to employ many different kinds of equipment such as magnetic defect detectors and crack monitors.”

A second challenge was how to assess damage and the impact of accidents on the platforms. This involved evaluating the influence of corrosion and cracking, fire and explosions. A third challenge was the scale of the repair campaign and the associated time and cost. “So the project team had to determine if it was necessary to repair all the platforms, and whether this was economic, effective or even feasible,” Wei Wei explained.

Among the main factors that had to be assessed was ice, which forms in this part of the Bohai Sea during the winter, imposing loads on the platforms: in extreme cases, ice build-up could cause them to keel over. Another factor was severe storms that can strike virtually all China’s producing offshore regions, damaging the platforms. The team evaluated a 50-year storm impact on Chengdao. Earthquakes, too, can occur almost anywhere in the sector - the team analyzed the impact of a 1,000-year event.

Other priorities included foundation strength analysis. According to Wei Wei, the combined action of waves and currents in the Bohai Bay area can degrade the foundation capacity, and could in some cases cause platforms to collapse. The same scenario could arise following damage resulting from collision with a vessel: in this case, the team based their evaluations on a ship weighing 1,000 t, with an impact speed of 0.5 m/s (1.6 ft/s).

“Fatigue cracking is one of the major challenges for platform life extension,” Wei Wei continued. “Fatigue damage may be caused by, for example, waves, currents, and ice. In this case, the team applied different safety factors for different components of the platforms.” The final factor evaluated was the impact of fire or explosions, which involved using Bentley SACS and FDS software to obtain the temperature of the affected elements and to determine the physical parameters of the beam elements, with SACS also applied for stress analysis. Other software used for the safety evaluation system included ANSYS, ABAQUS, FLUENT and ALCOR, the degree of use partly determined by the client’s preferences.

A second major achievement resulting from this campaign was a failure judgement solution, Wei Wei said, applicable to the topsides structures and personnel comfort. “Normally, platform designers only pay special attention to structural failings. Based on the analysis results from Bentley SACS, the team can assess the dynamic response of the platforms and also use the results to gauge personnel comfort and to determine whether equipment on the topsides might have failed.”

The third tangible achievement was the creation of an inspection, evaluation, and early warning system for offshore platforms that involves deployment of a range of instrumentation around the facilities, such as corrosion and acceleration sensors. “By collecting readings from the sensors, the system can forecast and warn early if there are potential dynamic failure problems like ice-induced vibration.” Using readings from the sensors, the team applies SACS to evaluate the risk over time that the vibration may cause.

In conclusion, Wei Wei said that Sinopec Shengli Oilfield expects to prolong the lives of over 90% of its platforms on the Chengdao field following these evaluations. “Without this project,” he added, “the production would have been significantly reduced.”

According to a report from law firm Wikborg Rein, at the start of last year Chinese shipyards were working on 60 jackups with deliveries scheduled between 2015 and 2016. This represents about 60% of all jackups to be delivered in the same period worldwide.

To secure market dominance Chinese yards have provided attractive payment packages to prospective owners, in some cases requiring a small down payment of only 5% at the start of the construction process with the remaining 95% payable on delivery.

With larger jackups costing around $230 million these terms enabled allowed more buyers to enter the market, many of them on a speculative basis. Over half the jackups at Chinese yards are thought to have been contracted at a time when the prospective owners did not have the security of a drilling contract, which would normally be needed in order to secure take-out financing.

Although this business model paid off for the Chinese yards in the good years, demand for new rigs has fallen away following the oil price drop and the reduction in most oil companies’ capital E&P budgets. This in turn has caused major problems for the Chinese yards, Wikborg Rein points out, with market oversupply causing contracts to be cancelled in cases where the prospective owners no longer consider the project viable.

Even established drilling contractors are looking to delay delivery of uncommitted rigs into 2017 in the hope that market conditions will improve. Often the Chinese yards have limited rights of recourse, and the situation they are finding themselves in is becoming increasingly desperate. They appear to be prepared to accommodate requests for extended delivery dates, although it remains to be seen whether the parties can agree on further delays beyond the already extended dates should the market downturn continue, Wikborg Rein says.

At the same time the value of the rigs under construction has fallen significantly. So when cancellations occur the yards are left with assets that continue to decrease in value. It is unlikely they themselves will want to operate these rigs and consequently their future remains uncertain.

According to Wikborg Rein, this may create opportunities for other prospective purchasers looking to secure high specification drilling rigs at a knock-down price, although there is little evidence to suggest the Chinese yards most affected by cancellations are willing to part with their rigs units for a price significantly below the original sum agreed for the construction.