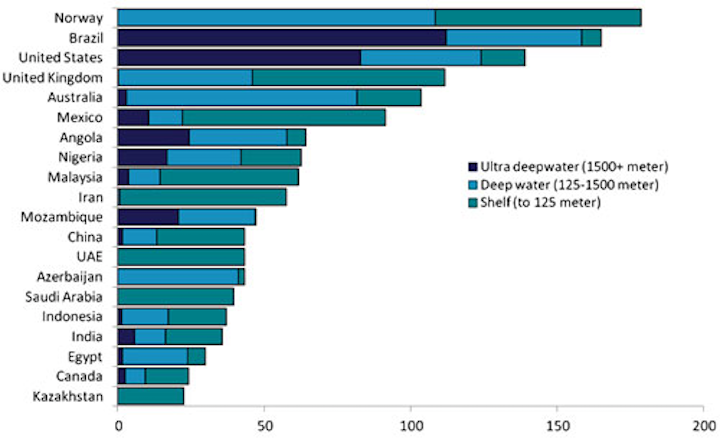 The production has the potential to grow as high as 500,000 boe/d in the following decade, assuming all of the discoveries come online and operators unlock some of the new discovery potentials. A couple of key questions remain: How much of the not-yet-sanctioned projects will come online given the current oil price environment? And, is there going to be a production rebound or a steady decline?

To set the scene for the global offshore regions, one can start by looking at the expected spending levels from 2015-2020. More than $300 billion will be invested into Western Europe, where Norway is the largest country with offshore investments amounting to $180 billion (or ~10% of global investments). The second largest region is North America, including the US ($140 billion), Mexico ($90 billion), and Canada ($24 billion).

South America represents the third-largest region, where Brazil takes the lead, as the second-largest country globally, with expected investments of $165 billion. Brazil, the US, Angola, and Mozambique are the countries with the largest investments in ultra-deepwater (over 1,500 m [4,921 ft]); whereas countries like Norway, Mexico, and the UK dominate the shelf developments (less than 125 m [410 ft] of water depth). Canada ranks as the 19th country in terms of total spending in offshore exploration and development, with expected investments amounting to $24 billion in the time period 2015-2020. About 70% of this spending will be dedicated to the development of infrastructure, drilling and completion of the offshore wells, primarily in the shelf water areas. The exploration capex will represent nearly 30% of the total spending in the country. The exploration activities will focus mostly on the deep and ultra-deepwater developments; more than 75% of all exploration capex will be dedicated to these deepwater developments.

Unlike other offshore markets, where several operators are competing for their share (e.g. the US, UK, or Norway), in Canada there are only a handful of operators of the offshore fields. Throughout 2015-2020, the largest operator, ExxonMobil, is expected to invest over $11 billion offshore Canada.

Almost 80% of these investments are directed to projects under development - primarily Hebron. Husky is the second- largest operator in terms of offshore spending in Canada. For Husky Energy, over 80% of the total expected spending ($4 billion) will be directed to developing the White Rose discovery. Suncor is estimated to direct all of its short-term capital into development of the producing Terra Nova field; at the same time, Statoil is expected to invest in the development of its Bay du Nord discovery from 2013, which established the Flemish Pass as a new play offshore Canada. Currently, the investments in the field are related to appraisal campaign. While waiting for the final investment decision, Statoil is working with the Newfoundland government to establish the terms for Bay du Nord development. Bay du Nord was the first significant deepwater (more than 1,000 m [3,281 ft] of water depth) discovery in Canada offshore, with resources estimated at 400 MMboe. The second largest deepwater discovery was Mizzen from 2009 (130 MMboe) and Harpoon from 2013 (70 MMboe).

Looking at shelf and deepwater discoveries combined, Bay du Nord still stands out as the largest single asset discovery since 1984 (when Terra Nova was discovered), with total estimated resources of 550 MMboe. The largest discovery ever made in Canada offshore was Hibernia in 1979. The total original resources were estimated at about 1.5 Bboe, and the field continues to be the largest producing field offshore Canada, with an average daily production of 120,000 b/d in 2015. However, the production from Hibernia has been on a steady decline - and on average, production on this field is expected to decline by 10% over the next five years.

Canada will need contributions from the projects currently under development, such as Hebron, to change the declining trend and grow again to more than 400,000 b/d, a level at which Canada offshore was producing from 2002 to 2008.

Crude oil represents nearly 75% of the total remaining resources of offshore Canada. This is light oil, with the average API gravity between 30 and 35°. Nearly 50% of the total remaining crude resources (~2.1 Bboe) are represented by the three largest fields: Hibernia (producing), Hebron (under development), and Bay du Nord (not yet sanctioned discovery). Hebron, together with Hibernia, belong to the five largest crude oil offshore fields globally (in terms of remaining resources) that have a fixed concrete gravity-based (CGB) structure, with Hebron at the top of the list. The associated gas is being injected at the large oil fields offshore Canada.

The Encana-operated Panuke Deep field is the largest gas resource offshore Canada (remaining resources of over 700 bcf). Encana operates the field with a medium steel platform facility type. According to the Nova Scotia Offshore Petroleum Board, Panuke Deep has been facing serious water woes since the beginning of 2015. Based on governmental information, the field produced on average ~130,000 liters (~820 bbls) of water per month during the months January-April 2015. Facing these difficulties, the operator was forced to shut down production from Panuke Deep from June through September 2015. The production recommenced in October 2015, and reached ~50 MM cu m in November 2015 - less than one-fifth of the peak production from the field from early 2014. Much speculation followed with regard to Encana’s next steps concerning the offshore field in Nova Scotia. The fact remains that Panuke Deep does not fit into the new strategy of the largest Canadian upstream company - it sold most of its gassy assets during the last two years and has invested heavily in the liquid-rich shale acreages onshore North America.

Production from projects offshore Canada has been steadily declining since the end of 2010. It will be the ExxonMobil-operated Hebron project (depicted in yellow in the chart), that will change the direction of this curve past 2017. The project was sanctioned at the end of 2012, and first oil is expected during 2017. Bay du Nord is depicted in the green color on the chart. Statoil has not yet sanctioned the project; however, the supply from Bay du Nord will be crucial to maintain the growing tendency of the Canada offshore production going forward.

As discussed above, there is tremendous growth potential offshore Canada. The question remains - will these fields be profitable at current oil prices? Looking at the breakeven prices for the Canadian offshore projects, it can be observed that only the southern extension of Hibernia and Terra Nova fields have their breakeven prices below the current low oil price ($34/bbl as of Jan. 8, 2016).

Rystad Energy believes in a significantly higher oil price towards 2020, making many projects economical in future. The large volumetric contributions from Hebron will require the oil price to be above $60/bbl. The depicted graph shows that there is a potential for the production to grow as much as 500,000 b/d by 2030 (~75% crude oil) if oil prices increase to the $100/bbl level by 2020. With oil prices at around $50/bbl going forward, offshore Canadian production would never experience a rejuvenation; large projects discoveries (like Bay du Nord) would never come onstream; and production would face a steady decline past mid-2030.

Sona Mlada, senior analyst, is the lead Canada onshore and offshore activity analyst at Rystad Energy. Her main responsibility is the analysis of upstream E&P activities in Canada, with a specific focus on shale asset modeling. She is the project manager for the quarterly North American Shale Report, published by Rystad Energy.